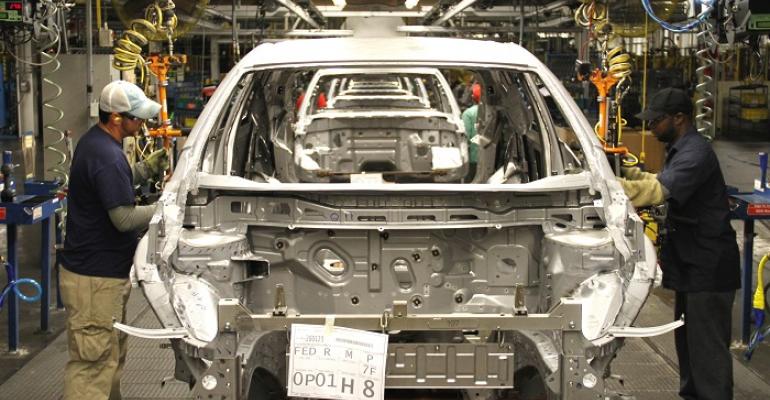 Some 1,300 jobs, including 400 supplier positions, have been added at Canton to support production of the Murano, whose first generation launched in 2002 as an &rsquo;03 model in Japan.

CANTON, MS – Nissan launches output of the new Murano here today, marking the first time the CUV has been built outside of Japan.

The sourcing shift makes Nissan good on its promise to build 85% of the vehicles it sells in the U.S. in North America by 2015, John Martin, senior vice president-manufacturing for Nissan North America, says during a Job 1 ceremony.

The Murano is the last high-volume Nissan sold in the U.S. to be assembled in North America. The GT-R sports car, Juke small CUV and Quest minivan remain Japan-built.

The ’15 Murano is the eighth vehicle added to the diverse roster at the Canton plant, which also builds the Altima midsize sedan, Titan fullsize pickup truck and NV large commercial van.

The CUV’s body is assembled on the truck/SUV line here, but the model has its own dedicated trim and chassis line, with 17 jobs per hour initially and 19 jobs per hour the goal, Scott Bayles, director-trim and chassis for truck systems, tells media during a tour of the Canton plant. The line currently is in ramp-up mode, he says.

Some 1,300 jobs, including 400 supplier positions, have been added at Canton to support production of the Murano, whose first generation launched in 2002 as an ’03 model in Japan. The second-generation Murano, bowing in ’08, also was assembled in Japan.

Nissan earlier said 500 new workers would be hired to support Murano production, but Bayles says most of the employees on the trim and chassis line are workers transferred from other areas of the plant.

A nearby supplier park opened this past summer and is providing just-in-time shipments of parts for the new Murano, as well as some of the older products at the plant.

The new-generation CUV goes on sale in the U.S. in early December.

Martin tells WardsAuto Nissan will assemble 40,000 Muranos in Canton this fiscal year and 94,000-95,000 next year, which will be full capacity.

Canton is the sole global source of the third generation and Martin says this might become a supply problem as CUVs continue to dominate cars in the U.S. “At the moment the American dealers are saying, ‘We want them all.’”

According to WardsAuto’s Q4 production schedule, Nissan sliced 15,000 units from its plan but holds onto the distinction of being the automaker boosting North American production this year the most, with a 19.7% increase from like-2013 seen.

With the addition of the Murano, the plant will be exporting to more than 100 markets, Nissan says.