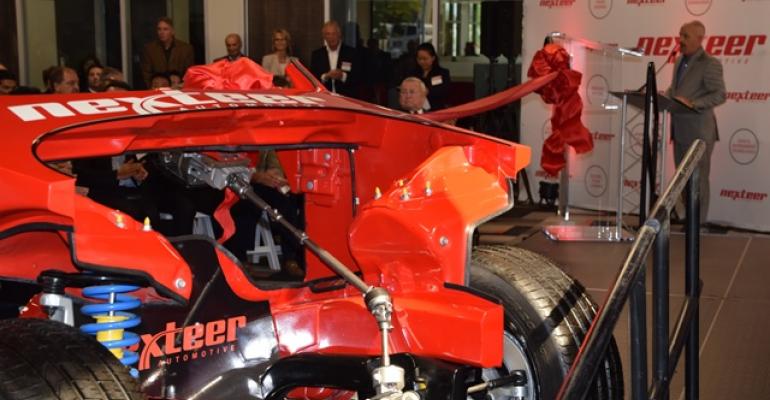 Nexteer Moves HQ to Metro Detroit in Search of Talent

With its new headquarters in Auburn Hills, MI,&nbsp;Nexteer&nbsp;can work more closely with customers on self-driving cars.&nbsp;Next year, some of its customers will launch vehicles that operate in Level 3 semi-autonomous mode.

AUBURN HILLS, MI – Nexteer, North America’s No.1 supplier of steering systems and deeply rooted in Saginaw, MI, since the early 1900s, is taking a bold step intended to find bright new employees and open doors to more business with automakers in Metro Detroit.

Several manufacturing plants, as well as product-development engineers, will remain in Saginaw (about two hours north of Detroit depending on traffic), but the Chinese-owned company is moving its world headquarters here, across Interstate-75 from FCA North America’s tech center and executive offices.

Most of the 150 people occupying the new headquarters moved from Saginaw or are in the process of relocating, while some continue commuting and others were hired new.

At the dedication last week, Chairman and CEO Guibin Zhao says the move has everything to do with the region’s ample pool of potential hires with extensive automotive experience. “We came here for the talented people in Metro Detroit,” Zhao says.

“Why did we come to Auburn Hills? Look around you,” Mike Richardson, senior vice president and chief strategy officer, says at the dedication. “We're in the heart of our core industry. Our customers are neighbors, collaboration is natural and timely, suppliers visit more easily and key industry groups will more readily hear our voice.”

Nexteer’s migration southward has been ongoing since 2012, when the supplier opened a customer-service center in Troy with about 50 engineers working on automated steering and other advanced driver-assistance technologies that are ushering the auto industry closer to self-driving cars.

That vision moves forward in 2017 when Nexteer will supply automakers launching vehicles that will operate in Level 3 semi-autonomous mode, WardsAuto has learned.

Company executives say Nexteer is well positioned as automakers continue adopting electric-power steering, which reduces weight and fuel consumption and is an important building block on the road to automated driving.

But steering wheels and columns are not expected to go away soon. Lubischer says it will be “a long time” before vehicles can function without anyone in control or watching the road.

“Steering is at the core of it. Steering is your lateral control,” he says. “If you have an autonomous vehicle, you’ve got to be 100% confident that the vehicle really takes the path that it’s supposed to.”

By using cameras, sensors and radar, Lubischer says the trajectory of a self-driving vehicle must be within centimeters of its intended path to ensure safe roadways.

An acronym his team uses often these days is FIT – or failure in time, to define electronic reliability. In the past, sensors were designed to achieve 1,000 FIT, meaning 1,000 system failures (such as a faulty reading by a torque sensor or position sensor) for every billion hours of operation.

“Today we talk about 10 FIT – that’s 100 times better in reliability. It took the industry many iterations and many years to get there, but that’s not good enough,” he says. “Tomorrow, when talking about autonomous vehicles, we are striving to achieve 1 FIT. What does that mean?”

Throughout their lifecycles, most vehicles operate for up to 20,000 hours. “A rough calculation, that translates to 1 billion hours of operation until you see an issue,” he says.

Achieving such reliability – and cars that can drive themselves safely – will require redundant sensors, he says.

Through the first half, revenue is up 17% to $1.9 billion and gross profit is up 31% to $334 million, and the book of new business amounts to $24 billion over the next several years.

The six plants in Saginaw are running three shifts daily, five days a week, driven by brisk demand for pickup trucks and SUVs. Nexteer supplies steering systems to nine out of 10 fullsize trucks sold in the U.S., including Ford, Ram and General Motors’ entries.

Less than a decade ago, the steering operations were on life support, struggling to compete under the weight of high union wages. Originally a division of GM, the business became part of Delphi when it was spun off in 1999. Delphi went bankrupt in 2005, and GM took the business back in 2009 to prevent supply disruptions. Employment at the Saginaw operations at that point had fallen to about 3,000 people.

A year later, Nexteer was born when GM sold the operations to Pacific Century Motors, which is controlled by Aviation Industry Corp. of China. Since then, PCM has invested $500 million in Nexteer’s Michigan operations, which now employ 5,000 people.

Beyond North America, Nexteer is the No.3 steering supplier worldwide and has 21 manufacturing plants, five regional tech centers and 11 customer support centers around the world.

GM used to generate most of the company’s revenues but now accounts for about 40%. For instance, Nexteer supplies steering systems for half of the BMWs produced worldwide, including the i3 electric vehicle.