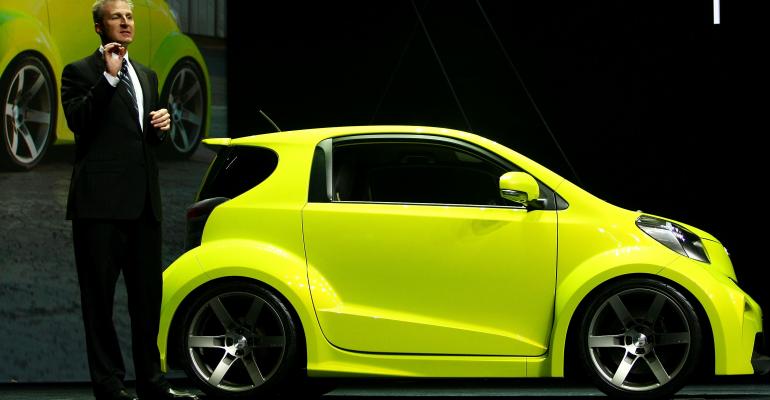 NEWBERG, OR – Jack Hollis is a self-described sports junkie.

While dining here with reporters at the media launch for all-new midsize Camry sedan for ’18, he keeps one eye focused on a nearby television, where the Golden State Warriors are taking on the Cleveland Cavaliers in the NBA Finals.

A one-time minor-league outfielder for the Cincinnati Reds, Hollis admits to spending the previous evening glued to the TV for the concluding game of the NHL hockey finals. “I just love sports,” he says.

That shows in spades when Hollis discusses the auto industry and his new job as group vice president and general manager of the Toyota Div. for Toyota Motor North America.

“There’s almost no more pure team sport inside the business world than the automotive space,” he says. “There’s a huge amount of competitors. They all have certain assets. You have to put your players together. And every other team has all-stars, too.”

A Stanford grad with a degree in economics, Hollis began his Toyota career in 1992 as a management trainee. Since then he has held a position atop the now-defunct Scion brand and led all marketing for the Toyota brand. Hollis ascended to his current position April 1, succeeding Bill Fay, who moved up to senior vice president-automotive operations for Toyota and Lexus in the U.S.

As Toyota Div. chief, Hollis now oversees 500 employees, more than a dozen model lines and 1,238 dealers in the U.S. and is responsible for injecting new life into a brand that has seen sales decline so far this year.

In his first interview with WardsAuto since being named Toyota Div. general manager, he talks about his priorities for the new job, the evolution in retail and the rapid market swing in the U.S. away from cars toward crossovers and SUVs. Following is an edited transcript of that conversation.

WardsAuto: As a longtime Toyota employee, is this a dream job?

Hollis: I started as a management trainee and have gone through a lot of jobs. But I (always) had a passion for business. I liked the auto business; I liked the global-ness of this business. And I’m a competitor. Leaving the sports world is tough, because as a competitor I love team sports, I love competing. And so when someone says to Jack Hollis, “OK, I’d like you to run Scion,” I run in there and take on the new team, new competitors. Then when they said, “Can you take on marketing?” OK. And every time the next (job) has been the most exciting.

Now they give me the opportunity to run the (Toyota) division. Let me tell you, I ran through the door and said, “OK.” Then you look at all the competitors again and you say how can our team compete against those teams? And it’s fun; you start moving your pieces around. So, is it a dream job? Absolutely. I’m stoked.

WardsAuto: So what are your priorities?

Hollis: Probably three that are very interrelated. The first is vehicle sales volume. The priority has to be that. There’s a competitive nature to me, so I want to beat everybody. I look at the retail world as my competition. So my championship every year is, can we win the retail competition – one customer at a time? I want the dealers to win for themselves and I want us to win for ourselves so that we can invest for the long term. I want to continue the investment in the products we continue to bring, our facilities for the dealerships and in our people. You need that sales volume to keep that engine running at full speed.

The third (priority) is the idea of what I call retail transformation, the retail of the future. How do we continue to enhance the guest experience as a partnership between our dealerships and our company? I work with our national dealer council, we have a group of dealers we call the trailblazers, and we have another group of dealers we call our first-mover dealers. These are all dealers we’re working with…these are our best and brightest, our most innovative, those who are our biggest risk takers. (They’re helping us) take a look at what does selling a car look like over the next one year, three years, five years, 10 years? That’s a passion of mine that started when I was at Scion. How do you look at that, what is the guest experience?

WardsAuto: Is the future all about mining Big Data?

Hollis: It’s easy for me to say yes to that. But it’s more. Big Data is cold. It’s Big Data personal, with a heart. It’s do we have a personal relationship with each of our customers? And that can only be done through the dealership. It’s the relationship we build with the dealer (and) the dealer (builds) with the customer that allows us to all be in alignment. So maybe that’s the best way to say, my overall goal is a continuously stronger alignment from guest to dealer to us. That means a little more investment in the personal-relationship side between all of us. We’re getting there. But I’m still going to come back to the fact (that) selling volume drives what we need to do.

WardsAuto: The U.S. market swing to trucks from cars took Toyota a bit by surprise. Are you now caught up with where you need to be in capacity and are you ready to make a bigger push on the truck side?

Hollis: No, we haven’t caught up all the way. We’ve narrowed the gap quite a bit. If you look at today, in round numbers we’re basically at a 63/37 industry, where light trucks and SUVs are 63% (of sales) and cars 37%. Our production right now is 60/40. So we’re three percentage points off the market both in inventory and future production. Just two years ago we were six points off of the industry. So we’ve narrowed that by 50%. That’s really good for us. We can compete there, because we always have leaner inventories than the industry and we’re able to turn those products at a faster rate. So at a 60/40 inventory split we compete with a 63/37 marketplace.

WardsAuto: The small C-HR CUV appears to be a success – you’re adding more trim levels, so are you ready to make a bigger effort there?

Hollis: When it comes to the C-HR and adding grades, when it comes to RAV4 expansion and becoming our best-selling vehicle for the company or (how with the) Highlander we’re investing in Indiana and growing, we’re going to continue to do what’s right for the marketplace.

At the exact same time, that’s why I’m excited about coming out with this new Camry at this time. There’s been no sedan focus in the industry. The trends go to where all the new product is – and it should, because new product is awesome.

WardsAuto: So you think some of that shift to utilities was just dearth of fresh product on the sedan side?

Hollis: You look at three years ago and look at every new product, you’d have a hard time thinking about a sedan launch. You could think of 40 new SUVs. So we’re happy with the C-HR. We added another (utility vehicle) to our lineup, and every one of those is near or at max capacity. Then it’s our job to figure out a way to produce more.

WardsAuto: Are you getting enough C-HRs now?

Hollis: We are, but we’re also always looking at how we can grow C-HR. The feedback on the launch of that has been great. The sales have been on pace or actually a little ahead of projections. But it’s the comments you hear: “I love this for its handling,” or “I love this for its styling.” That’s not always the first two things you hear when it comes to Toyota, and we’re hearing that more and more often. The C-HR is that way, the new Camry will be that way, and we’ll continue on down this path with our sedans and small crossovers.

WardsAuto: Is the U.S. vulnerable from a capacity standpoint if there’s a spike in gas prices? Is too much capacity skewed toward trucks?

Hollis: What’s the saying, too much of a good thing can be a bad thing? When everybody’s putting resources into one area and become reliant on that, (and) then gas prices change and people start moving back to sedans and hybrids at a fast pace, you’re going to have a significant industry issue. That’s why you have to be flexible, you have to be agile in order to change that and be at the forefront. Toyota is well prepared. So if the industry wants to switch back, Toyota will lead at that time.

WardsAuto: Regarding the new Camry, Honda is dropping the Accord’s V-6 option. Do you think that creates a big opening for you?

Hollis: I do, but not because they’re dropping it. I think Honda’s decision to go to 4-cyl. turbo engines is a strategic decision on their part. (The V-6 model) is clearly a small part of our business (about 6% of Camry sales), but is still one that is (a) passionate (choice) for those who are in those vehicles and looking to replace their current V-6s. There’s a lot of trust and loyalty in the Camry name, so we want to continue to make that available. But it has nothing to do with what Honda is doing or anybody else is doing. What we do see is an opportunity that may grow potentially another 1%, 2%, 3% because of other players dropping out.

WardsAuto: Is the FT-4X CUV concept shown in New York getting closer to production?

Hollis: It is a concept very similar to the FJ Cruiser we did 10 years ago (that made it to production). We wanted to gauge the interest of consumers (in the FT-4X). It has been pretty overwhelming, much greater than our expectations of support for that vehicle. It’s prudent for us to look at it every way to see what they are excited about and (whether) we can produce it. So are we serious about the concept? Yes. Is it closer to production? Well, there’s no way I can get into that yet. But I can say we are extremely excited about the feedback we’ve received on the FT-4X.

Toyota Hopes to Strengthen Relationships With New Supplier Center
May 24, 2017