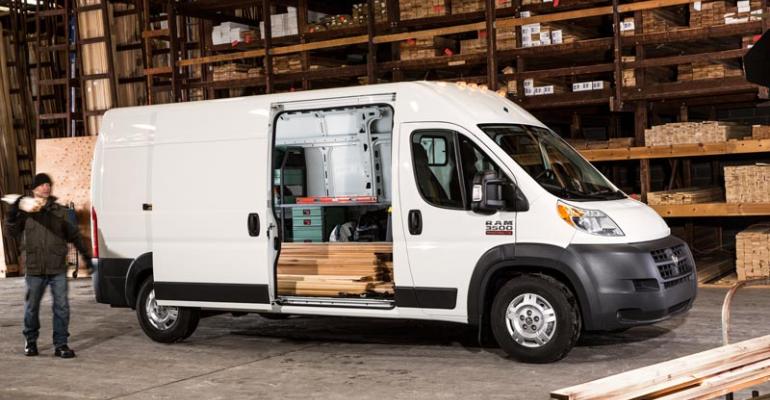 While the van borrows its architecture from the Fiat Ducato, several interior and exterior modifications make the vehicles different.

The next major collaboration between Chrysler and Fiat arrives in the form of the ’14 Ram ProMaster van, unveiling at the Chicago auto show today.

Though the ProMaster is built from a blueprint of the current European Fiat Ducato, executives say it is not a case of badge-engineering.

“That makes me laugh; that makes everyone else smile,” Brad Pugh, Model Responsible-ProMaster Van, tells reporters at an earlier backgrounder event at the auto maker’s Auburn Hills, MI, headquarters. “We know that the real story is deep beneath the skin.”

The ProMaster is front-wheel drive, which Chrysler says is exclusive to the segment that includes the Daimler Sprinter vans, Nissan NV, Ford Transit, GMC Savana and Chevrolet Express vans. The unibody Ram van offers 13 configurations based on roof height, wheelbase and body length.

The ProMaster van, also available as a chassis with cab, has two engine options: Chrysler’s 3.6L Pentastar V-6, a Ward’s 10 Best Engines winner, and the closely watched 3.0L EcoDiesel, a Fiat-developed oil-burner that also appears in the Jeep Grand Cherokee this year. The ProMaster diesel model has an inline 4-cyl. engine, while the Grand Cherokee has a V-6.

Fuel-economy numbers for the ProMaster van have not been released, but 20 demonstration models were sent to real-world customers who report numbers in the “mid to high 20s (mpg) [12 L/100 km],” Pugh says.

Beyond the powertrains, Ram is counting on fleet customers to take advantage of the ProMaster’s exterior innovations first seen on the Ducato. The front bumpers are pieced together with modular, high-strength plastic that makes for faster and less-costly repair if they are damaged.

Headlamps, typically expensive for commercial customers to replace, are placed higher on the cab to reduce chances of impact. Ram adds sidesteps to allow for easy cleaning of the windshield.

Ram also retools the body structure and suspension of the Ducato for the ProMaster to accommodate rougher U.S. roads wrought with more potholes than the European average. Electronic stability control is standard on the vans.

Engineers say the shorter-wheelbase ProMaster can turn 180 degrees in 36 ft. (11 m), “what a C- or D-size car can do,” Pugh says. That will be a key selling point as Chrysler targets urban drivers steering through tightly packed streets. The auto maker also says it torture-tested the van’s brake system in California and it is unmatched by competitors.

Inside, customers can opt for Chrysler’s Uconnect infotainment system, which allows for mobile Wi-Fi connectivity. Cloth or vinyl seats come in several shades of black, and front seats have added suspension and swivel capability for access to the rear cargo area. Lending to the trend of reformatting European vehicles for American tastes, several cupholders are added.

The ProMaster has two roof heights of 90 ins. (229 cm) or 101 ins. (257 cm), allowing for a tall driver to stand up in the van without bumping his head. Another key selling point will be a side sliding door for unloading cargo in narrow spots.

“The last thing you want is to have a commercial customer with a product that can’t be serviced,” he says. “We wanted to have a 90% coverage across the entire U.S. If a customer was down with a commercial vehicle, they would be within 30 miles within a point of service.”

Chrysler will offer a 15-year corrosion-protection plan to new customers.

The ProMaster’s pricing has not been announced, but Hebloom and Ram President and CEO Fred Diaz say an upswing in the U.S. economy and housing market, as well as pent-up demand to replace aging product, will drive sales.

“Timing’s everything,” Hegbloom says. “This time around, our timing is absolutely perfect. All the things are leading in the right direction.”

In Chicago, Chrysler also debuts two additional models: A limited-production, Mopar-edition Dodge Dart that only will be sold to 200 customers, and the Dodge Challenger Redline, an up-trim version of the muscular coupe.