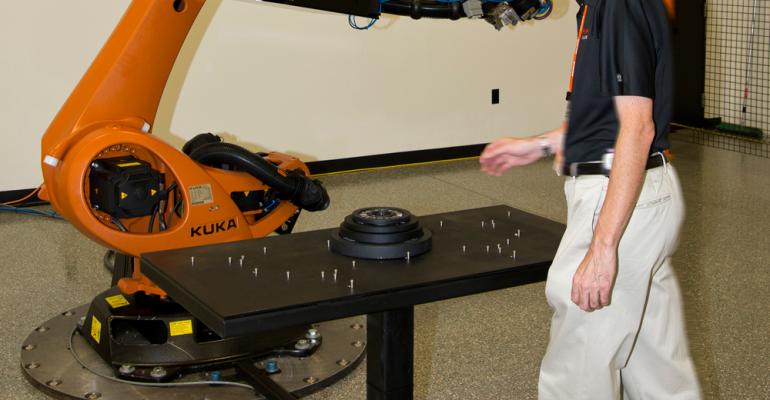 The robotics maker and systems integrator has seen its U.S. automotive business grow in the past three years from 10% of its customer base to nearly 35%.

SHELBY TWP., MI – Kuka Robotics spent the global recession using its diversity to invest in people skills and innovation, and now is reaping the rewards.

The Augsburg, Germany-based robotics maker and systems integrator’s U.S. automotive business has grown in the past three years from 10% of its customer base to nearly 35%, and its 2012 order backlog in the sector already has surpassed its annual sales target.

Daimler and Chrysler rank as two of the suppliers’ largest automotive customers in the U.S., with hundreds of Kuka robotics and employees occupying the Mercedes assembly plant in Tuscaloosa, AL, and the Jeep facility in Toledo, OH.

However, the supplier recently raised its 2012 revenue and income outlooks, based mostly on the recovery of the global auto industry and Kuka’s expansion into emerging markets such as China and Eastern Europe. In Europe, the company already commands a leading market share.

Shepherd says the goal now is to make bigger inroads in North America, using the region as a hub for further global expansion after spending the recession sinking research and development dollars into other sectors less affected by the downturn such as aerospace, medical and packaged goods.

“Those robots are a flexible tool, and they can solve many problems, so you can apply them to a variety of industries,” Shepherd tells WardsAuto.

The latest facility here is one of four new Kuka sites to open in North America within the last year, joining facilities elsewhere in Southeast Michigan, Mexico and California.

“Diversification stabilizes our business for the cycles of the auto industry, allowing us to maintain staff and product development. And now we’re bringing technologies from other industries over to automotive, making it more competitive,” Shepherd says.

For example, Kuka has learned a lot about robot accuracy and performance from recent large-scale applications for an aerospace customer, such as how they handle lightweight material used on planes.

Conversely, Kuka has taken assembly-line ideas from automotive to aerospace.

The supplier also has developed a safe-operations robotic work cell for the medical industry, allowing doctors and nurses to work side-by-side with the robots in tight surroundings. It’s now offered to automotive customers.

During a demonstration here of the technology, the robot slows its activity as a person approaches, idling itself completely once the individual is alongside and then slowly starting up again as the person backs away.

Other newly developed or freshly redesigned Kuka robotics on display include spot welders with new high-performance electrical interfacing capability;  dual ARC welding and milling technology; friction stir-welding robots new to the auto sector; laser welders; and portable training cells the supplier can move to a customer anywhere in the world.

“All of them better, cheaper, faster and more reliable,” Shepherd says of the robots, adding today’s robotics also manage energy much more efficiently while operating and powering down automatically when idle.

Today’s manufacturing robots dispel the notion automation takes jobs away from humans, he says, claiming robots are bringing jobs back to the U.S. that had gone overseas due to cheaper labor.

“For every robot deployed, it generates new jobs,” Shepherd says. “Jobs at Kuka are a good example. We wouldn’t have all the business that we do, plus all the systems integrators that help us, without them.”

Robots also generate the quality and productivity necessary to compete in a global market, he adds.

“Robotics brings business back into (the U.S.) that might otherwise go to a low-cost country,” Shepherd says. “(Robots) also prevent intellectual property from being drained off. You don’t want your best and brightest ideas taken to a country where you can’t control (them).”