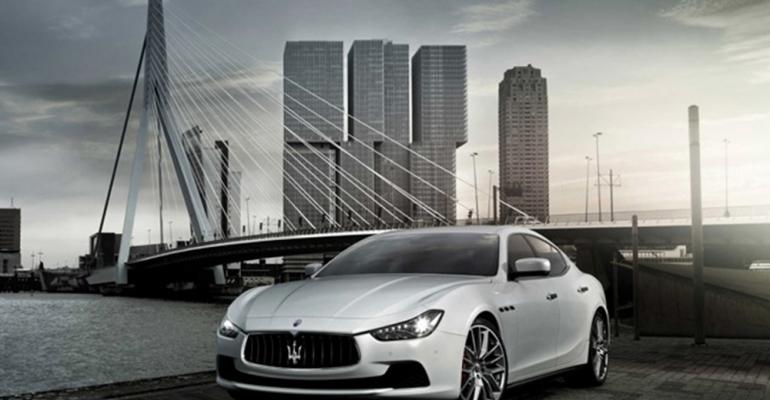 Maserati deliveries last year spiked to 15,400 units, up 148% compared with year-ago, following the launch of the new Ghibli and updated Quattroporte.

Maserati production is being stretched to keep up with demand for both the new Ghibli and refreshed Quattroporte that launched last year.

The Grugliasco, Italy, factory is working at full capacity on two shifts and is delivering some 135 units per day in an effort to reduce waiting time to the customary three months, a spokesman for the automaker says.

Sales through the first two months of the year extend the growth registered through the final months of 2013. Maserati deliveries last year spiked to 15,400 units, up 148% compared with year-ago, following the launch of the new Ghibli and updated Quattroporte.

Maserati says 228 vehicles have been delivered in Italy over the past two months, 11 times the volume registered one year ago. The boom signals a revival of confidence in the national economy. Registrations in the six leading European markets soared 700% to 854 units.

As the Ghibli hit the road it drew attention to its style, luxurious interior and smaller size in comparison to the Quattroporte. The availability of a powerful diesel engine in both models spurred customer interest as well.

The Ghibli accounts for 65% of total sales whereas the split between diesel and gasoline powerplants is 60/40.

At the Geneva auto show, Lorenzo Ramaciotti, Fiat vice president-design, says the automaker is studying whether to further expand the Maserati range beyond the existing models and the Levante SUV going into production next year.

One possibility is a 2+2 coupe inspired by the Alfieri concept unveiled at the show. Some 28 ins. (300 mm) shorter than the Granturismo, the Alfieri would be positioned in the market segment of the evergreen Porsche 911.

Fiat Chrysler Automobiles Chairman Sergio Marchionne, commenting in Geneva on the chances of seeing the Alfieri at Maserati dealers in the near future, says: “The platforms and the powertrains are there.”