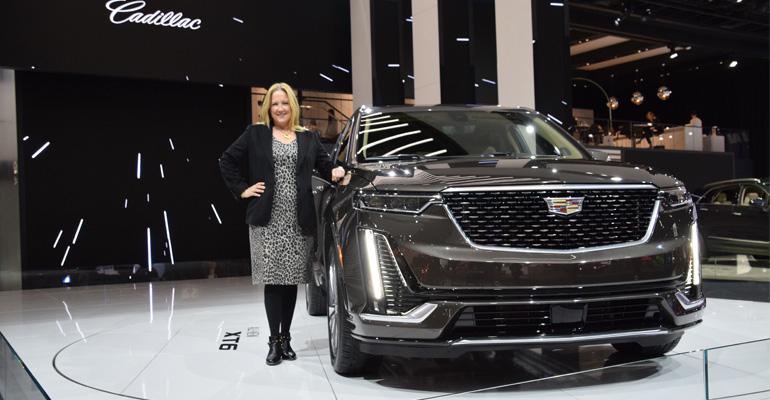 Cadillac received a $12 billion product-investment pledge to reinvigorate the brand but struggled out of the gate with a sedan-centric lineup when buyers' mouths are watering for SUVs and crossovers.

But she also did a turn at home builder Pulte and most recently as chief marketing officer at McDonald’s, where, in addition to unlocking the breakfast menu of the nation’s largest fast-food chain three years ago to send sales through the roof, Wahl spruced up its image for younger diners.

GM hopes Wahl can work the same magic with Cadillac, which two years ago received a $12 billion product-investment pledge to reinvigorate the brand but struggled out of the gate with a sedan-centric lineup when buyers’ mouths are watering for SUVs and crossovers.

Cadillac’s U.S. deliveries last year fell 1.1% to 154,702 units and while it did post record global results of more than 380,000 units on the strength of demand in China, the brand has not witnessed back-to-back annual sales gains in its most-profitable home market since the industry began its climb out of the economic recession in 2011.

Johan de Nysschen, who was lured from Nissan’s Infiniti luxury brand to turn Cadillac around, was ousted in April after four years and his experiment with a New York headquarters was ended. GM installed longtime executive Steve Carlisle, relocated the brand back to Detroit and announced a plan to consolidate its car line and aggressively expand into SUVs and crossovers.

Wahl says her team is keyed up to be located next to the folks imagining future Cadillac products and to have what many view as a final chance to revive the historic brand.

“We are coming back to our roots and celebrating that,” Wahl tells Wards in an interview here. “If you look at the brand, we have a history of innovation and when we do that and bring it to the fore, Cadillac does very well. When we don’t pay enough attention to it we lose a little traction.

“We think it is important to be here with who we call the makers, to be working side by side with the designers and engineers as we go forward and make sure Cadillac can be all that it should be.”

Wahl considers the move back to Detroit a second act in Cadillac’s 10-year plan. The first, set in New York, rebooted the brand in the eyes of consumers. Images and footage of the products were clearly placed in the city to combine Cadillac’s American heritage with the luxury-goods capital of the U.S. New creative work dials up the energy and focuses more closely on its new products, the XT4 and coming XT6.

“Combine that pinnacle of luxury with all of the engineering imagination we have here in Detroit, which will take us to new levels, we’ll branch out a little bit from the strict visuals of New York to represent where we will go in the future,” she says, pointing to materials launching with the all-new XT4 compact crossover placing the vehicle in a more general location.

“But you should have the feeling that we’re American; boldly and proudly differentiated from anyone else, and you get a lot of that energy when you come back here,” Wahl says.

Marketing for the XT4 also unabashedly appeals to female buyers, a break from the dark, brooding and masculine spirit previously. One early commercial finds four women enjoying a drive in the XT4 when their outfits magically switch to the edgier clothes four passing skateboarders are wearing. The spot has a whimsy befitting the sporty little crossover.

The spot is one of 25 videos Wahl’s team created for various mediums. Each tells a different story about the XT4. She says they were a product of her exuberance after an early visit to Cadillac’s design studio outside Detroit, where the brand’s sales and marketing team will fully arrive by April 1.

“I can use television to show you how it makes you feel to drive an XT4, all the fun and excitement a Cadillac brings, and then I can use all the other channels to go on about craftsmanship, unique design elements, safety and connectivity, so we have a lot of different ways to tell these stories,” she says.

Wahl recently launched a unique approach to reaching potential XT4 buyers with a new tool within YouTube. Capitalizing on a user’s search terms at the Cadillac’s channel, they’ll receive individualized information. If the user wants performance information, for example, Cadillac knows to cue a closely related video next.

“We’re using tools like that to get to someone and engage them and tell the whole story,” she says.

One of Wahl’s first experiential marketing efforts at Cadillac saw the brand link with Girlboss, a community of entrepreneurial-minded women. Cadillac hosted 40 members in Las Vegas for a networking event capped by an afternoon of racing instruction in the ATS-V and CTS-V at nearby Spring Mountain Motorsports Ranch, home to the Cadillac performance driving school.

“It was fascinating,” Wahl recalls. “They may have never done that before on their own and they did awesome. They loved everything Cadillac had to offer and we were welcoming to them. That is part of the strategy, as well.”

Wahl also likes the returns of a partnership with Live Nation, a ticket hub for concerts and sporting events. Test drive a Cadillac and receive $100 toward a ticket purchase.

“We’ve done 3,000 test drives for XT4 and our completion and conversion rates are the highest they’ve ever been,” she says.

As for the McDonald’s magic, Wahl says it is in full play as Cadillac leverages its iconic history but never stops looking to the future, a strategy evidenced by the simultaneous unveilings of the XT6 3-row SUV at the North American International Auto Show and GM’s plan to make the brand its lead on electrification technology.

“That lesson is very practical to me: Support and sell the core, and at Cadillac that is a new lineup of SUVs,” she says. “We’re now playing fully in all the growth segments but still having clearly an eye to the future with the EV announcement.”

Wahl also intends to experiment. The brand will relaunch Book by Cadillac in the coming weeks, taking the alternative ownership model into new markets with a recalibrated approach. Additional tweaks to the program could come on the fly, she says, and expect the same approach when it is time to launch Cadillac’s first battery-electric vehicle.

“McDonald’s was an incredibly fast-paced business. Every day we knew exactly where customers were, what they were responding to and we did an enormous number of pilots across the country to see what was working and what wasn’t.

“I think that is important with our EV future, because I don’t think anyone can say for certain exactly what lies ahead, but if you are not out there constantly building, experimenting and just getting with it, you’ll never get there.”