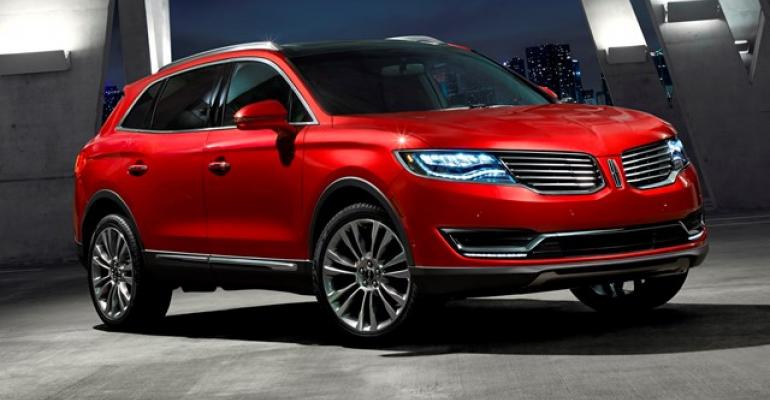 Among midsize luxury CUVs, the Lincoln MKX has trailed big sellers from BMW, Cadillac and Mercedes. But the new model arrives this fall with fresh styling, a clean interior, high-end audio and numerous active-safety technologies.

In addition, the ’16 MKX, going on sale first in the U.S. this fall, will be offered with two new Black Label interior and exterior design themes intended to compete with premium luxury brands. The vehicle also will launch later in China, Canada, the Middle East, Mexico and South Korea.

Lincoln needs desperately for the MKX to build on the momentum of the smaller MKC, which went on sale last spring and was well received, with 13,077 deliveries by year’s end, according to WardsAuto data. Overall, Lincoln sold 94,474 vehicles in 2014 in the U.S., up 15.6%.

The MKZ sedan has picked up steam after a rocky 2013 launch, finding 34,009 customers in 2014. The MKZ is Lincoln’s best-selling vehicle.

No.2 in the brand stable in 2014 was the previous-generation ’15 MKX, which managed 23,995 sales. Not bad for a vehicle at the end of its lifecycle. In 2014, it outsold the Land Rover Evoque and Volvo’s CUVs. All other luxury utes from Acura, Audi, BMW, Cadillac, Lexus and Mercedes and the Infiniti QX60 topped the MKX, according to WardsAuto data.

The previous MKX was a fancy version of the 5-passenger Ford Edge, which also is being redesigned. Both vehicles will share Ford’s common global C/D platform, but Lincoln executives say the MKX will have unique underpinnings to ensure a more nimble, quiet ride.

The standard powerplant is the 3.7L naturally aspirated V-6, expected to deliver 300 hp and 280

lb.-ft. (380 Nm) of torque, based on preliminary test data. A 6-speed automatic transmission is standard, and all-wheel drive is optional.

The MKX has electric power-assisted steering and is the first Lincoln to offer adaptive steering.

With its split-wing grille, full LED headlamps and sleek silhouette, the new MKX is stately and distinguished. Inside, 22-way adjustable front seats offer “active motion” massaging of upper legs and the lower back through six adjustable air bladders in the cushion and five in the lower seat back.

An embedded modem enables connectivity for passengers, and the available MyLincoln Mobile app, accessible via a smartphone, lets owners start, lock, unlock and locate their vehicle, as well as schedule a remote start.

The Revel Ultima system, with 19 speakers and QuantumLogic Surround Sound, is standard on Lincoln Black Label editions and available on Reserve models. Tweeter and midrange speakers are positioned closely together for superior audio quality.

Lincoln opted for Revel as the premium audio supplier for the MKX while vehicles already in the market, such as the MKZ, MKC and Navigator, continue offering THX audio.

Lincoln engineers say the Revel system delivers sound that is 10 times more consistent than that of THX, without being 10 times more expensive.