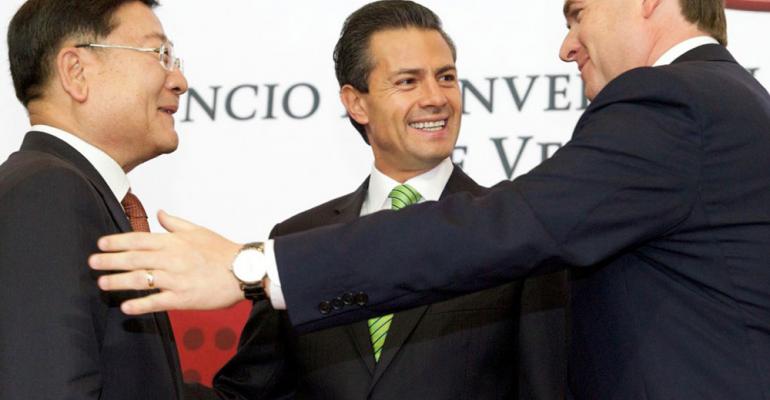 Analysts expect the new plant initially will build the Rio and Soul subcompact, and the Forte compact sedan. Kia executives say U.S. sales of all three are being curtailed by tight supplies.

Construction of the facility in Pesqueria, a suburb of Monterrey about 70 miles (112 km) south of the Texas border, begins next month, with production expected to launch in first-half 2016. Annual capacity eventually will reach 300,000 units.

Analysts expect the new plant initially will build the Rio and Soul subcompact, and the Forte compact sedan. Kia executives say sales of all three are being curtailed by tight supplies, although the automaker is in sight of meeting its 2014 full-year sales goal of 570,000 units. For the first seven months of 2014 U.S. sales were up 7.2% year-on-year with 349,722 deliveries.

Kia spokesman Michael Choo tells WardsAuto the plant will be 100% owned by Kia and no joint-venture partners are involved. He does not say whether any production will be shared with Hyundai Motor Group corporate sibling Hyundai.

Choo also declines to estimate sales within the Mexican market, or the number of vehicles exported from the new plant.

“We are still putting together our Mexican dealership network plan and our sales targets will depend on the outcome of this planning,” he says. Construction of new-car dealerships and development of a vehicle-service supply structure is expected to launch soon after construction of the plant begins.

Mexico is an attractive choice for the new factory because it is one of the three partners in the North American Free Trade Agreement, which allow automakers to export vehicles duty-free from their Mexican, U.S. or Canadian plants to the other member nations.

Mexico also has free-trade agreements with the European Union and Japan, as well as many nations in Central America and South America, which significantly enhances export potential for the new plant.

Kia’s combined sales in Central America and South America were down 3% for the first seven months of 2014, with 92,449 vehicles sold. The FTAs should help Kia recover particularly in Brazil, which had been the automaker’s leading market in South America until new, high tariffs added in 2013 depressed sales; deliveries through July were off 28%.

Currently the biggest South American markets for Kia are Chile, Colombia and Peru, all of which are longtime free-trade partners with Mexico.

Analysts say the Pesqueria location’s advantages include proximity to nearby Mexican steel plants and natural-gas sources. While worker wages are relatively low compared with the U.S. and South Korea, the cost of electricity is roughly double that of commercial electric power produced in the U.S. To offset this disadvantage the new plant will generate its own power, using natural gas to power electric generators.