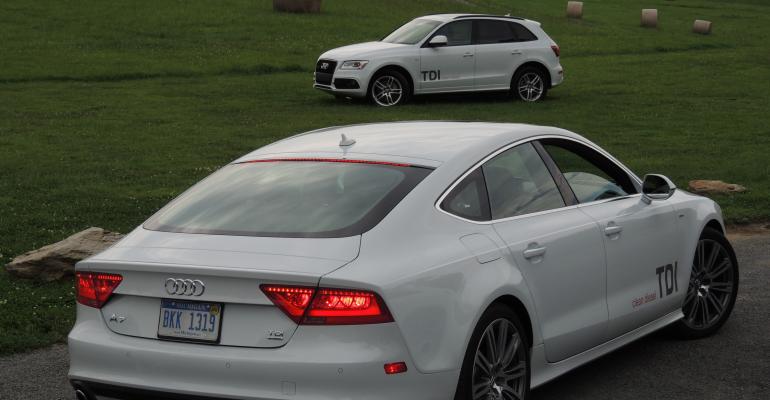 The latest round of vehicles uncovered during recently heightened federal test activity of VW vehicles would add thousands of units to an expected recall by the automaker.

According to the EPA, certain ’14-’16 Volkswagen, Audi and Porsche light-duty vehicles equipped with the automaker’s 3.0L TDI V-6 use special software to sneak under government tailpipe emissions standards, but in everyday driving spew up to nine times the allowable levels of nitrogen oxide.

VW already has been cited by the EPA for using the defeat device on ’09-’15 Volkswagen- and Audi-brand vehicles equipped with the automaker’s 2.0L TDI 4-cyl.

The latest round of vehicles uncovered during recently heightened federal test activity of VW vehicles would add thousands of units to an expected recall by the automaker. But perhaps more damning to the company are questions whether it has been entirely forthcoming about the extent its cheating.

“EPA and CARB discovered the (3.0L) defeat devices through the testing program being conducted by the EPA, (CARB) and Environment Canada,” says Cynthia Giles, assistant administrator-Office of Enforcement and Compliance Assurance at EPA.

Giles declines to elaborate further on discussions between regulators and the automaker, which has been seen putting forth an apologetic tone since its deception involving 482,000 diesel vehicles in the U.S. were first made public on Sept. 18. Those cars emitted 40 times the allowable NOx limit.

Today’s action by the EPA adds 10,000 more vehicles to the cheat list, including the Volkswagen Touareg and  Porsche Cayenne CUVs, as well as the Audi A6 Quattro, A7 Quattro, A8, A8L sedans and Q5 CUV.

VW of America did not immediately return telephone calls for comment.

“VW has once again failed its obligation to comply with the law that protects clean air for all Americans,” Giles says during a teleconference with journalists. “All companies should be playing by the same rules.”

Excessive NOx emissions have been found to cause asthma and other respiratory problems, with the young and elderly at special risk.

Giles says an investigation into VW’s fleet continues alongside stepped-up efforts industrywide. She does not indicate if other automakers may be guilty of using similar devices since the investigation moved to model-by-model testing.

“We’ve been testing a range of vehicles,” she says. “We are not in a position to comment.”

According to the EPA, software installed on the electronic control module of affected vehicles operates in two modes: “temperature conditioning” and “normal.” Under temperature conditioning mode the cars pass emissions tests. Exactly one second after the completion of initial emissions testing, the vehicle transitions to normal mode and changes operating parameters where NOx emissions and performance increase.

VW could face up to $18 billion in fines from U.S. regulators as a result of the deception. A number of civil lawsuits are under way, too. The automaker also is under investigation in Germany for using the defeat devices to pass European emissions regulations. VW has admitted some 11 million engines worldwide employ the software.