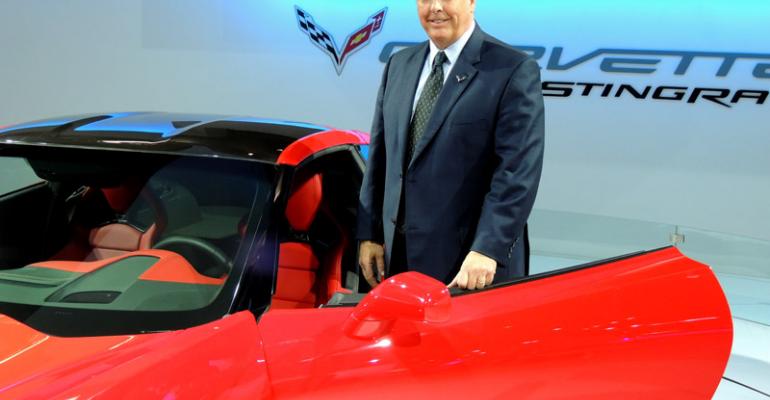 &quot;The Stingray goes on sale in the third quarter, and&nbsp;while we will have a 6.2L 450-hp V-8 at launch, if you ask if there will be more-potent versions, remember it&#39;s a Corvette with a history of power,&quot; Russ Clark says.

CHICAGO – The new ’14 Corvette Stingray will be joined by other versions, just be patient, Russ Clark, Chevrolet marketing director-Corvette and Impala, says at the auto show here.

"The Stingray goes on sale in the third quarter, and while we will have a 6.2L 450-hp V-8 at launch, if you ask if there will be more-potent versions, remember it's a Corvette with a history of power," he says.

Will Chevy focus more on global sales opportunities with the new-generation 'Vette than it did with the last model? Only about 200 Corvettes, all ZR1 versions, were sold in Europe last year.

"That's one reason we are unveiling the convertible version of the coupe at the Geneva motor show on March 5,” Clark says. “We are looking at the global opportunities for Corvette, but we can only build so many, and there is great demand for that car in the U.S."

What about a Pace Car version to attract attention to the new 'Vette? "More news is coming on that one," he says. "We always tell the racing people we're here."

As for the new ’14 Impala sedan that arrives at the end of next month, don't look for an SS version.

"We have an SS sedan coming that's off the global rear-wheel-drive platform, not the front-wheel-drive Impala, that will be introduced at the Daytona 500 this year, Clark says. “There are no plans for an Impala SS.”