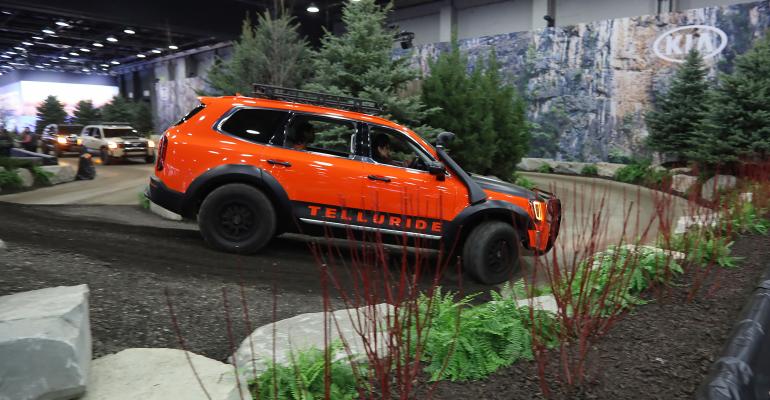 NAIAS 2020 will take experiential events, like last year's Kia Telluride ride-and-drive, to the outside.
Industry

A strong indoor/outdoor component, with experiential events promised, will be present when the Detroit auto show returns in June of next year.

DETROIT – The shift of the North American International Auto Show from January to June will not only result in better weather, but a better experience for attendees.

That’s the belief of NAIAS 2020 show officials, who spoke here today at an Automotive Press Assn. event on how the Detroit-based show will be different from those of years past.

“The auto show campus will literally spill out from the four walls of the TCF Exhibition Center (formerly Cobo Hall) into Hart Plaza along the waterfront, doubling the show size with 2-million-sq. ft. (186,000-sq.-m) of new experience,” says Doug North, chairman of the 2020 NAIAS. He says the 2-million figure doesn’t count events planning to be held at parks Campus Martius and Spirit of Detroit.

Rod Alberts, executive director for NAIAS, believes the indoor and outdoor nature of the show will strongly appeal to both the public, who will have more outdoor events to choose from in a summer month, as well as automakers and suppliers, some of whom NAIAS is hoping to lure back.

There was a glaring hole on the show floor earlier this year when the German luxury brands sat out the 2019 NAIAS in January, and Alberts says it is not a forgone conclusion they won’t be back in 2020.

“We’re still in discussions, both in North America and out of Germany, because there could be participation out of either one or both,” Alberts tells Wards of ongoing talks with both U.S. and German officials of Audi, BMW, Mercedes and Porsche. British Jaguar and Swedish brand Volvo also did not attend NAIAS 2019. In not participating in the 2019 show, all cited either meager sales in Michigan relative to other U.S. regions and/or the savings that would result from not displaying at the event. The situation is perhaps most pronounced in, but not unique to, Detroit. Brands have been sitting out other auto shows (BMW was a notable no-show in New York this year) and the recent Frankfurt motor show reportedly saw a 30% dip in attendance from last year, calling into question its stability.

Alberts says there will be more value to automakers with the new indoor/outdoor NAIAS format, and the 2020 show plan has taken inspiration from both the Goodwood Festival of Speed in England and South by Southwest in Austin, TX, for how to use the outdoors and an urban area as a backdrop to an event.

“The choices are broader now. It used to be you would just have the display inside, static cars…(but) we’re engaging the city a lot more because we’ve got a convention center downtown (and) a great city to (have this event in).” he says, referring to the gentrification and improvements to parts of downtown Detroit during the past decade.

Wards has learned some automakers are chafing against budget constraints to have both inside and outside displays or events, and Alberts indicates there only is a choice for a smaller automaker or company to do one or the other.

“Maybe if they’re a smaller company they just want a ride-and-drive. They just want to set up a couple cars because they don’t have a big lineup,” he says. “It depends on the company. There’s detail to the rules we set up.”

As NAIAS has been trying to reframe its event as a mobility conference as well as an auto show, ride-and-drives are planned to be a key component of the 2020 show, which will run from June 6-20, 2020.

Autonomous shuttles are planned to ferry passengers on both press and public days, while members of the press will get access to an airport-to-downtown shuttle.

“The downtown circulator will operate for two weeks, basically preview week and the first public week,” Amanda Roraff, director-Technology Activation for PlanetM, a Michigan mobility initiative, tells the audience. “They will be open to all NAIAS attendees and the public. Now the shuttle, or shuttles we’re offering between the airport and downtown, that will be a private route that will be by invitation only.”

She and Elise Feldpausch, connected vehicle specialist-Michigan Dept. of Transportation, are fielding proposals right now and are unable to say how many operators and how many shuttles will be available, as well as how those that are electric will be charged.

“Some (companies have) proposed one or two vehicles, some proposed 10 or more…we are evaluating all of that right now,” Roraff says. “(We’ll need to figure out) where they’re going to charge, where we’re going to store the vehicles at night – and we know there’s still some limitations with autonomous vehicles if there’s a heavy downpour – what are the hours of operation if they’re electric vehicles? So there’s a lot of details we still need to flesh out.”

North says a charity preview, traditionally occurring at the end of the press preview week, still will be a part of the new NAIAS and he expects overall a bigger economic impact of the show on the city with the new indoor/outdoor setup. “(There will be) no snow and ice, average temperature in the 70s, late-night sunsets, (and) remarkable food and entertainment,” he says.