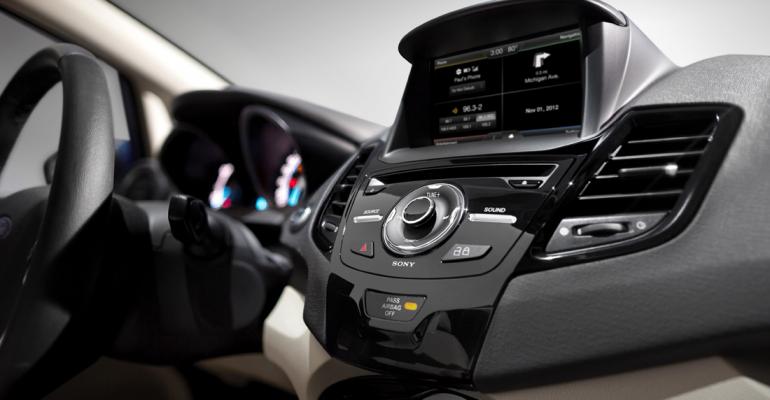 Ford has continuously offered updates to its infotainment system, and plans to offer another one later this year focused on improving the user experience.

Ford says customers increasingly are choosing its MyFord Touch infotainment system when purchasing a new vehicle, despite third-party criticism of the technology.

Influential consumer publications such as Consumer Reports and consultants such as J.D. Power have downgraded Ford’s overall quality ratings due to problems with the touchscreen-based system, citing slow response times and a confusing layout.

“Dealer and customer orders keep exceeding our expectations,” he tells WardsAuto. “We’re seeing a lot of demand for our vehicles when they have the latest innovations.”

The technology has become a major selling point. According to Ford data, 53% of ’13 Ford Escape owners say the touchscreen was a top purchase driver, compared with a 22% segment average.

Sherwood says the sheer volume of vehicles sold with MyFord Touch skews the quality ratings from firms such as J.D. Power.

“If you’re selling 80% of vehicles with that technology and the competition is only selling half that, you’re going to get more negative feedback,” he says. “Customers who have vehicles with MyFord Touch are more satisfied with quality than those without the system.”

Jake Fisher, director, auto testing-Consumer Reports, says Ford is selling more vehicles with MyFord Touch because it bundles it in popular packages, making it difficult for consumers to order a vehicle without the system.

“The take rate is high, but it’s most likely not demand,” he tells WardsAuto. “It’s because to get other pieces of equipment you wind up having to have that equipment.”

Sherwood says that’s not the case, noting dealers carry sufficient inventory of Ford vehicles without the system, yet buyers keep asking for the technology.

Ford says it has addressed many of the early owner complaints about the system and has conducted consumer workshops to better understand what improvements were necessary.

Several system upgrades have been made available to consumers via USB memory sticks or through dealers and another is planned for later this year, Sherwood says. Unlike past updates, the upcoming one will focus on improving the user experience.

“We’re getting to more refinement and making it easier to use and more intuitive,” he says. “With earlier upgrades we were dealing with bigger issues like speed and stability.”

Sherwood says some vehicles, such as the F-150 pickup, already feature redundant physical controls, because drivers often wear gloves that are not compatible with touchscreen technology.