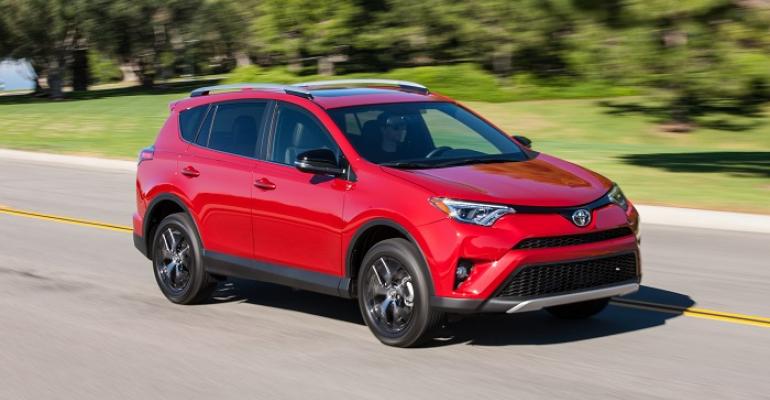 More Than Ever, CUVs Seen as Long-Term Trend

For many Americans, their first new car was a rite of passage. Nowadays, there’s a good chance that first car will be a CUV.

As CUVs gained 6.3% market share from 2012 to 2015 and 1.8% market share in first-quarter 2016 vs. Q1 2015, there are fewer and fewer automotive executives who believe their popularity is a blip on the radar, destined to crater if fuel prices spike.

“(We) think this is a permanent shift, not one driven by gas prices or anything else,” he says. “Indeed, the shift was already happening before gas prices started to decline.”

As more Americans than ever embrace what essentially are tall wagons, for their commanding view of the road, a skosh more ground clearance and the utility they offer, car sales are contracting. 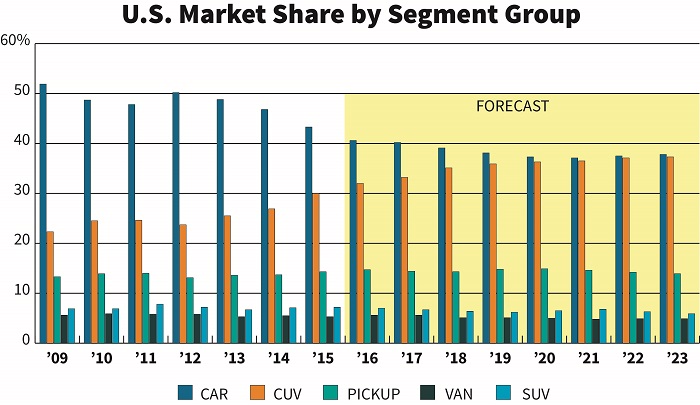 Zuchowski ticks off a series of attributes favoring CUVs: styling, fuel economy, versatility and maneuverability, high sight lines and more safety than a car in the event of a collision.

While body-on-frame SUVs of the 1990s and early 2000s were confirmed gas guzzlers, struggling to get 20 mpg (11.8 L/100 km) combined, most of today’s unibody CUVs achieve car-like fuel economy.

“Some (CUVs) now rival the fuel efficiency of V6-powered midsize sedans from only a few years ago,” LaNeve points out.

One-Vehicle Families Will Want a CUV

And with the projected reduction in American car ownership thanks to emerging trends such as car sharing and autonomous-vehicle technology, CUV popularity only will increase, Zuchowski believes.

“I think what we’re going to see with Millennials is…less multivehicle families, so a vehicle has to be able to do more things, and a crossover allows you more flexibility,” he says. “I think that’s really a generational shift that will probably accelerate rather than slowdown.”

Paul Edwards, vice president-U.S. marketing for Chevrolet concurs: “There is just so much consumer demand for the capability of a crossover.”

Toyota’s Bill Fay says Millennials are driving the majority of the shift from cars to CUVs at his brand too, although he sees a second, older demographic also at play.

“A lot of the shift to compact sport utility, from what we can see, is a little bit of a (Baby) Boomer driver that wants a little bit more utility as they get older.”

LaNeve pegs both the Millennial and Baby Boomer groups at 80 million-strong, with Boomers staying or returning to CUVs because they are easier to get in than cars, and reasoning hipper CUVs make older buyers feel younger.

While Fay notes Toyota wants the Camry sedan to maintain its position as America’s No.1-selling midsize car, it also is working to increase capacity of its in-demand RAV4 compact CUV.

“We’re kind of challenged to maximize both,” he says, conceding, “(But) if midsize car continues to outflow, we may end up selling a few less Camrys as time goes on.”

Meanwhile, the Camry last year had relatively flat sales of 429,355 and a high percentage of fleet sales, 17%-18%. Toyota typically sells 10% of a single model to fleets.

From Midsize Sedan to Compact CUV

Much of the outflow from midsize cars has gone to compact CUVs, executives say, as the two vehicle types have similar price points.

Compact-car sales have weathered the CUV trend slightly better than D-segment cars, with sales in WardsAuto’s Upper Small segment up 1.1% last year, while deliveries in the Lower Middle segment slid 1.9%.

But Zuchowski believes, with the growing number of subcompact CUVs in the U.S. market, such as the Honda HR-V, Mazda CX-3 and Jeep Renegade, C-car volume too will begin to degrade.

“As you bring out these B-CUVs, that’s going to start migrating some of those compact buyers over to the crossover side,” he says.

Hyundai does not have a subcompact CUV in the U.S. just yet, but it is reducing capacity of its Elantra C-car this year so it can build more Santa Fe midsize CUVs at its Montgomery, AL, plant.

Aldred, whose Buick brand had a 60/40 CUV/car sales split in 2015, explains why most automakers aren’t crying over reduced car share: cars typically have been loss leaders for many OEMs, while CUVs can command higher prices and resale values.

“You look at the sedan market, every conceivable automaker is in the segment, especially midsize and compact,” he says. “And the manufacturers that are in there that don’t have good (CUV) lineups, they have to win there, so you see a lot of incentives and discounting in those segments. And as (C- and D-cars have) been stagnant, or declining last year, they’ve become more competitive, more aggressive.”

Hyundai is one brand that lately has relied on incentives to move its midsize sedan, citing the increasing propensity of buyers to opt for CUVs as one of two reasons – ho-hum styling the other – for a sag in Sonata sales. This month in metro Detroit, Hyundai is offering $1,750 back on most grades of the ’16 Sonata, according to Kelley Blue Book incentive data. That compares with $1,000 in cash back on the ’16 2-row Santa Fe Sport.

Illustrating how little buyers care about fuel economy at the moment, the Sonata Eco, which gets a 32-mpg (7.4 L/100 km) combined fuel economy rating, has a $2,250 spiff, KBB says. 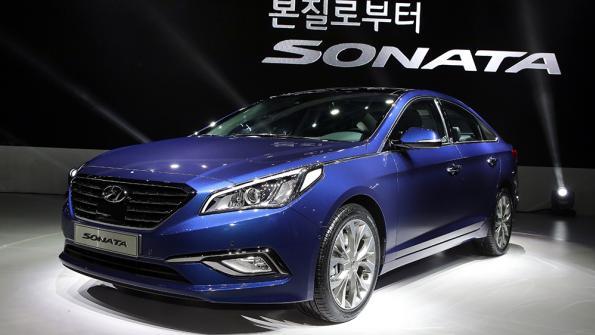 Customers are willing to spend more on CUVs than a similarly sized car, Aldred says, in part because they view them as worth more and the ultimate expression of a brand.

“Consumers have a higher perception of them,” he notes. “They like them better and they think the brand is more modern and progressive because you sell (CUVs).”

Buick is looking to grow its CUV sales even more next year, with the launch of the China-built Envision subcompact model.

Chinese consumers are shifting their vehicle-buying patterns to closely align with the U.S. market, Aldred says. “We’re seeing the same thing (where) people are moving out of the traditional body styles (and) into (CUVs),” he says.

CUVs also are taking hold in Europe, with Lexus noting the region quickly has embraced the RAV4-based NX.

A rare naysayer is Honda’s John Mendel, who doesn’t believe CUVs represent an unstoppable force and for years has advised industry watchers to remember 2008 and 2009.

That’s when U.S. fuel prices reached previously unseen highs, with a gallon of regular unleaded reaching a record $4.11 in July 2008.

“I think (the growth in CUVs is) a bigger trend than it was a year ago…but I don’t know how permanent it is,” Mendel, executive vice president-American Honda says. “It was a completely different trend in 2009, when everybody went from crossovers and SUVs back to sedans.”

Many execs concede when you expand the question of whether higher fuel prices could harm sales of light trucks overall, not CUVs specifically, the equation changes. In other words, don’t expect Lexus to have a 76% increase in sales of its LX fullsize SUV, as it did in the first quarter, if regular unleaded soars back to $4 per gallon. 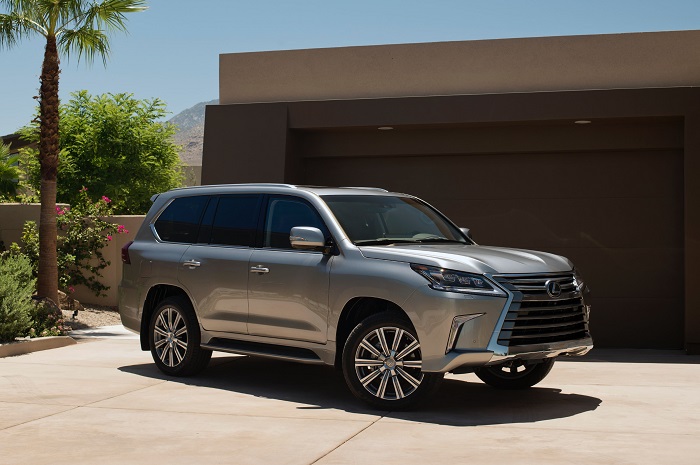 While Honda has the best-selling CUV in the industry in the CR-V, Mendel notes the importance of cars to the automaker’s bottom line.

“Sedans for us still do extremely well. Civic and Accord, we did close to 700,000 units last year,” he says. Indeed, the Civic and Accord sold better for Honda in March than the CR-V and Pilot, both of which were down vs. year-ago.

Nissan isn’t ready to say cars are doomed, either. The brand’s three sedans, Sentra, Altima and Maxima, plus the Versa Note subcompact, available as a sedan or hatchback, racked up nearly 550,000 sales in the U.S. last year.

“While obviously taking advantage of the crossover trend, (Nissan believes we need to) stay very heavily invested to be sure we have a competitive sedan lineup,” says Michael Bunce, vice president-product planning for Nissan North America. “In terms of percentage of sales, 54%-55% of our sales are still sedans (and) the Note, the Sentra and the Altima are still really strong players in their segments and we want to make sure they (stay strong).”

Yes, automakers who sell a lot of sedans want to protect their market share.

Those who don’t? They’re throwing caution to the wind.

In what surely will be a closely watched experiment, FCA U.S. is not renewing its Chrysler 200 midsize sedan and Dodge Dart compact 4-door beyond 2017, after struggling for years to compete effectively in those segments.

“We have decided to de-focus from the manufacturing standpoint on the passenger-car market,” FCA U.S. boss Sergio Marchionne, seeking more capacity for the surging Jeep and Ram brands, said in January.

Partnerships with other automakers for C- and D-cars are being explored, but it’s unclear if they will materialize, or whether FCA will proceed without any traditional C- and D-cars in its lineup if they don’t. – with James M. Amend