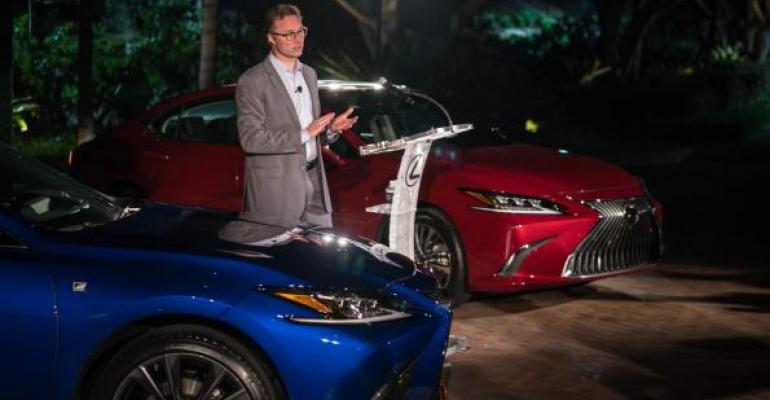 The new model marks a dramatic departure in styling and performance &ndash; including the addition of an F Sport trim to the line &ndash; as Lexus looks to appeal to a more driving-oriented, younger buyer and lure customers away from competing brands.

RANCHO PALOS VERDES, CA – While others may be bailing on the shrinking U.S. sedan market, investing in an all-new ES model appears close to a no-brainer for Toyota’s Lexus luxury arm.

The ES has controlled the top of Lexus’s best-selling-cars list since 1992, and it currently is No.2 in its sector in the U.S., according to Lexus. That position, plus the relative overall strength of midsize-luxury-car demand in the face of the general consumer shift toward CUVs, has Lexus doubling down on the car with its extensive redo for ’19.

“We understand the (market) dynamics,” Cooper Ericksen, vice president-marketing in the U.S., tells WardsAuto in an interview here. “As a brand we’re 60%-70% utility vehicles.

“But we also think there’s a consistent demand moving forward for sedans,” he adds, noting the midsize-luxury-car segment, as defined by Lexus, is second only to midsize CUV/SUVs in the luxury-vehicle sector and still generates sales of 350,000 units annually. “There’s lots of volume being done there.”

Viewed globally, the new ES appears even more critical to the future of the 30-year-old luxury brand, now sold in 90 countries. Although the U.S. is the No.1 Lexus market worldwide with sales of 305,132 vehicles in 2017, more ES sedans are sold in China than anywhere else. Last year, ES deliveries totaled 60,000 units there, about 10,000 more than in the U.S., accounting for 45% of the 132,000 Lexus vehicles sold in China.

The new model marks a dramatic departure in styling and performance – including the addition of an F Sport trim to the line – as Lexus looks to appeal to a more driving-oriented, younger buyer in the U.S. and lure customers away from other brands. It’s also added a couple of inches of rear legroom, a critical improvement for the Chinese market but one that also could give it a competitive advantage in the U.S.

“In other brands you have to go to a higher price point to get that much room,” Ericksen says, pointing out the ES now offers more legroom than the larger LS sedan. “We have every indication we are going to continue to have a great conquest vehicle on our hands.”

The front-drive car, unveiled simultaneously last week here and at the Beijing auto show, is powered by a 3.5L V-6 engine mated to an 8-speed automatic transmission. Also available is a new-generation hybrid powertrain, expected to increase penetration from the current 10% as Lexus continues with an affordable-pricing strategy that “takes some of the premium out” of its hybrid models. That game plan has worked to boost hybrid sales of the RX 33.3% and NX 167.8% in the first quarter, according to Wards Intelligence data.

“We’re attracting more of those customers that are looking at the cost equation right now,” Ericksen says. “The ES is going to be a great performing hybrid. We think the take rate on hybrid is going to increase a bit on this next-gen system.”

The ’19 model shares its architecture with the Toyota Camry and Avalon. V-6 versions will continue to be built with those two sedans at the automaker’s Georgetown, KY, plant, with hybrids imported from Japan.

The ES is the third model after the LC coupe and LS sedan to feature more dramatic exterior styling geared closely to Lexus’s “Experience Amazing” advertising campaign. But given its volume leadership, it will be the brand’s biggest play yet to reengineer its image with more exciting vehicles.

“The reach of the ES is going to be significantly greater than the LS,” Ericksen says, noting the higher volumes have Lexus’ 240 U.S. dealers more excited about the ES than they were with the launch of the new LS flagship earlier this year, forecast to sell at about 15,000 units annually.

“With all our products we try to focus on that,” Ericksen says, pointing to the addition of F Sport packages on several models in the lineup. “Every car that we introduce, we’re trying to have a version that is more appealing to a younger customer. We feel based on the styling, technology and driving dynamics of that car that it’s going to bring a little bit of a new customer into the ES – and that is going to be a younger customer to the ES line”

Take rates on F Sport models reach as high as 95% on the RC coupe, Ericksen says. About 40% of IS sedan buyers opt for the F Sport, and initial estimates are as many as 20% of ES sales could go to the performance model.

Ericksen says the goal for the brand this year in the U.S. is to make its reinvigorated lineup pay off. It introduced the new LS sedan, added a 3-row model to the RX CUV line, will bring the ES to showrooms in September and will add the new entry-level UX CUV to the stable near the end of the year.

So far, Lexus is off to a strong start, with first-quarter sales up 3.8% to 64,211 units in a light-vehicle market that has gained only 2.1% overall. That performance is attributed chiefly to a 77.1% increase in LS demand and strong sales of the GX, RX and NX utilities. Ericksen credits the fullsize body-on-frame GX’s success in part to the new 3-row RX, which has drawn buyers into the showroom who are looking for a roomy SUV.

The changeover to the new model should slow ES sales this year to about 45,000, he says, but volume is expected to bounce back in 2019 with full-year availability of the new model. Through the first quarter, ES sales totaled 9,263 units, down 2.6% from year-ago. Inventories of the outgoing V-6 model stood at 125 days’ supply at the end of March.

“It’s one of the biggest product years we’ve had,” Ericksen says of 2018. “So our goal is to really do justice to all that product and use that product to shift the brand to a more emotional, engaging, fun-to-drive brand imagery.”