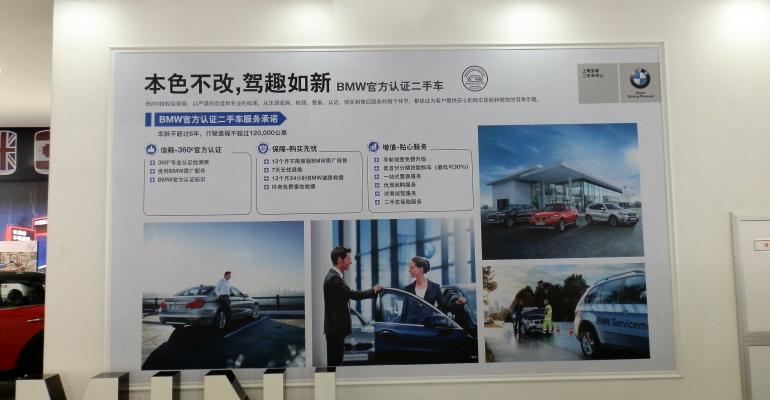 China is the world&rsquo;s largest new-vehicle market, but used-car sales are relatively small. They are expected to take off in the next few years as inventories rise and consumers become more comfortable buying secondhand vehicles.

“Second-hand sales haven’t been growing that much,” he says, “but they should get better this year.”

China is the world’s largest new-vehicle market but used-car sales are relatively small. They are expected to take off in the next few years, however, as used-car inventories rise and consumers become more comfortable buying secondhand vehicles.

“The used-car market in China is expected to have an explosion in the coming decade, because the ratio of used to new is opposite compared to the U.S.,” Kevin Huang, director-marketing and sales at Piston Intelligence, tells WardsAuto.

China’s used-car market grew by a compounded annual growth rate of about 17% from 2010 to 2015, according to Piston, a consultancy based in the city of Guangzhou in southern China. Some 13 million used cars are on the market in China, the company estimates.

Still, the ratio of used to new car sales in China is only 0.26, compared with 2.5 in the U.S., Piston says. But new-car sales are slowing despite promotion by the Chinese government, which wants to put more fuel-efficient cars on the road and taxes used cars at a relatively high rate.

BMW sees the Certified Pre-Owned market as a “not yet fully explored profit stream” to boost dealer profitability, says Lena Aw, a spokesperson for BMW Group. Profits on Certified Pre-Owned cars sold in China are higher than those without that designation, she says.

The concept of Certified Pre-Owned is not well-known in China, says Aw, so BMW is putting a lot of effort into branding its program. A big selling point is a 7-day return policy and a 1-year unlimited manufacturer’s warranty.  The program also includes free connectivity and navigation updates for one year.

That kind of policy helps overcome one of the main barriers to faster growth in China’s used-car market – a lack of trust, says Jiang Shan, director-Power Information Network, a unit of J.D. Power China.

Other roadblocks: Transaction taxes on used-car sales can be high and, until recently, used cars could not be sold outside the province they were registered in. Some city-level governments still restrict sales of used vehicles from outside their boundaries, Jiang says.

Chinese consumers’ aversion to buying secondhand products also has slowed the growth of the used-car market.

But those barriers are falling. A growing number of online sites provide information on a car’s history, giving consumers more confidence. And Chinese consumers, beginning to see the value in used cars, are buying them as a second car, Huang says.

Piston figures the real growth in China’s used-car market will occur between 2019 and 2023, when the growth rate will rise to 20%.  Sometime in 2020, the number of used cars sold will equal the number of new-car registrations at 23.5 million units, according to a Piston study.

Independent dealers account for the majority of used-car sales in China, and consumer-to-consumer transactions, some conducted online, account for 15%, Piston estimates.

A few blocks from the BMW dealership, the Shanghai Xietong dealership group has Ford and Buick retail outlets on the same outdoor lot. Part of the shared lot also houses a Shanghai Chengxin used-car operation.

Ford China is developing a Certified Pre-Owned program, having completed pilot programs in seven cities, a Ford China spokesperson says. “We are incorporating the learnings into used-vehicle programs, though the numbers remain small,” she says.