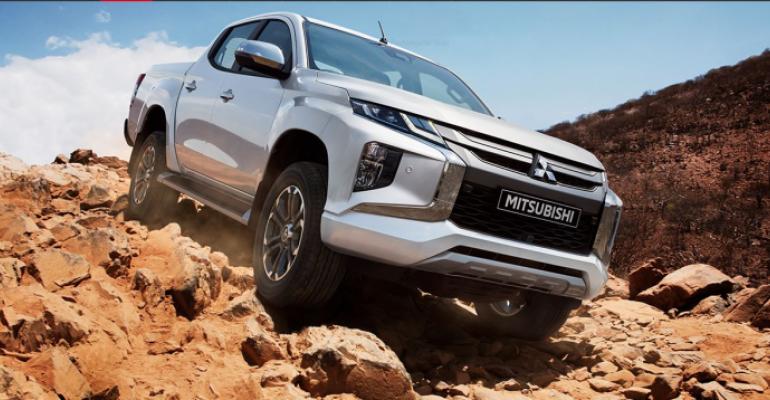 The revitalized Japanese brand is targeting its seventh consecutive year of growth in the U.S., but sells only four models in the States – one subcompact car, two small CUVs and one midsize CUV.

Ford recently started selling the Ranger again, albeit a new model that like most competitors today is more midsize than compact.

Mitsubishi last fielded an entry in the segment from 2005-2009 with the Raider, a rebadged Dodge Dakota that was a product of Mitsubishi’s former alliance with Daimler, then owner of Chrysler.

Overseas Mitsubishi retails the Triton compact pickup. It was refreshed last fall and bound for 150 countries, although not the U.S.

“We would like to have (a pickup), but we’d have to have one that’s the right fit for Mitsubishi, for our demographic, and something that’s really competitive in the market,” Mark Chaffin, chief operating officer-Mitsubishi Motors North America, tells Wards in an interview.

LMC Automotive forecast data shows a Triton is slated to arrive in the U.S., but not until 2024 as a ’25 model.

Of the three automakers, Nissan is the only one with an entrant in the small pickup segment in the U.S., the Nissan Frontier, although the truck has not been fully redesigned since 2004.

But as hinted at in Chaffin’s comment on competitiveness, the Raider was not very competitive in the U.S., selling 2,935 units in 2008 compared with the Toyota Tacoma’s 144,653.

Meanwhile, when asked if Mitsubishi can bridge its historical strengths of performance and utility vehicles, he hints, yes.

“This is my belief: I think what’s defined as performance is going to evolve. So you start mixing in some of that electrification technology and these hybrid drivetrains, the aspect of performance is really going to change in the future.”

The brand has been slowly rebuilding its volume here after it cratered in the middle of the last decade due to several factors, namely the loss of Daimler as an alliance partner and defaults from a 0% financing scheme in the U.S.

MMNA CEO Fred Diaz told Wards last week of the scheme, which also called for zero money down and zero payments for 12 months: “When you sell your vehicle based only on the deal, it becomes a race to the bottom.”

The brand is focusing on markets where the segments it is selling in are popular. While it was once a nearly full-line automaker, today Mitsubishi has whittled its passenger-car lineup down to just one model, the subcompact Mirage, as the trend away from cars and toward light trucks has intensified. Mitsubishi offers three CUVs: the small Eclipse Cross and Outlander Sport and the midsize Outlander.

The Eclipse Cross and a plug-in hybrid variant of the Outlander are attracting brand loyalists, Chaffin says, while new-to-the-brand buyers like the size of both and the eco-friendliness of the PHEV.

While most of Mitsubishi’s new U.S. dealers have never retailed the brand before, some are returning to the fold.

“Most of them are new, but we do have a couple of guys that are raising their hand to come back in (because) they’re starting to see (our sales growth) is not just a blip on the radar,” he says. “This is a real upward trend for Mitsubishi and it’s proven it over the last few years, not just in a few months or in one year.”