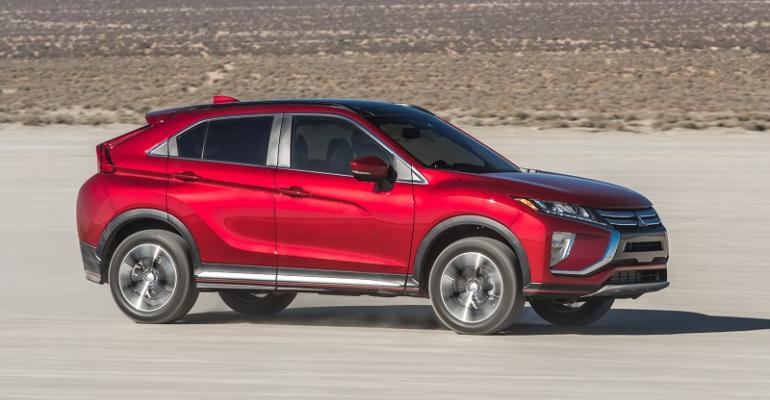 Figuring out how and when the two automakers will share features and technology still is being determined, although some non-vehicle changes already have occurred.

MALIBU, CA – Long-struggling Mitsubishi is seeing brighter days ahead as the newest member of the Nissan-Renault alliance.

But unclear is how long it will be before Nissan-Renault technology will appear in Mitsubishis in the U.S., or vice versa.

“The next-generation Outlander (CUV due in a couple years) will be kind of the first ideas of implementing and using common platforms and sharing technologies,” Melvyn Bautista, product manager-Mitsubishi Motors North America, tells WardsAuto here during a recent Eclipse Cross CUV media drive.

However, he says Mitsubishi and Nissan are trying to determine if some vehicle features could be made common in refreshed models, rather than waiting until a full redesign.

“That, we’re still trying to see, to see what we can fit in (from Nissan) and how can we do it and does it make sense?” he says.

Francine Harsini, senior director-marketing for MMNA, says Nissan wants Mitsubishi’s plug-in hybrid technology, which it lacks in its own tech stable and which Mitsubishi is bringing to market now in the new Outlander PHEV CUV. In turn, Nissan is expected to supply Mitsubishi with battery-electric technology, a strong suit of the former as Nissan has been retailing its Leaf BEV since 2010.

A change already happening because of joining the alliance is Mitsubishi now enjoys the same attractive ad rates in the U.S. as heavy-advertiser Nissan, increasing its ability to buy more TV commercials, including those on broadcast networks ABC, CBS and NBC that it had long been absent from.

“We have a joint purchasing letter that we signed, Nissan signed as well as Mitsubishi Motors, and that is recognized by the networks,” Harsini says. “So the upfront (ad-buying season) that just occurred for the 2017-2018 broadcast year, we went to market and the networks did basically acknowledge that they would give us those rates.”

Despite joining the alliance, Don Swearingen, executive vice president-MMNA, says there are certain things Mitsubishi wants to maintain, namely its own product lineup. Industry pundits have posited whether the larger Nissan could absorb the smaller Mitsubishi’s models, or eliminate the brand altogether in the U.S.

“We want to work on technology, manufacturing and procurement processes to control and reduce our costs,” Swearingen says. “But it’s also important we keep our own brand image, our own product lineup and our own sales-and-marketing team, clearly distinguishing the cars so as we develop common platforms we still have to make those vehicles unique to each brand.”

Outlander Sport to Get Smaller

Meanwhile, Mitsubishi plans to better distinguish its CUV lineup by rejiggering the size of its current small CUV model.

With the new Eclipse Cross, Mitsubishi now has two small CUVs in the U.S. But Bautista says the automaker’s other C-segment model, the Outlander Sport, will get smaller in its next iteration to create more distance between it and the Eclipse Cross.

The Outlander Sport won’t become an A-segment CUV but will become a smaller CUV, something along the lines of the new Nissan Kicks, he says. However, Bautista stops short of saying the next Outlander Sport will share a platform with the B-segment Kicks.

MMNA’s CUV lineup of the compact Outlander Sport and the midsize Outlander has been responsible for driving its sales upward in recent years.

Both are relatively small players in their respective segments, however. The Outlander Sport has 3.3% of WardsAuto’s Small CUV group this year, and the Outlander has 1.0% share in the Middle CUV group. The Hyundai Tucson leads small CUVs with 11.5% share, while the Toyota RAV4 is the share leader among midsize CUVs with 11.8%.

Bautista isn’t expecting the U.S. new light-vehicle market to shift back toward cars anytime soon. Mitsubishi in the U.S. has just two cars: the subcompact Mirage and compact Lancer. But MMNA’s crystal ball shows no letup in CUV popularity that would spur it to add car nameplates.

With the new Outlander PHEV and Eclipse Cross, Bautista says Mitsubishi has the “right product at the right time” to meet the growth projections for CUVs.