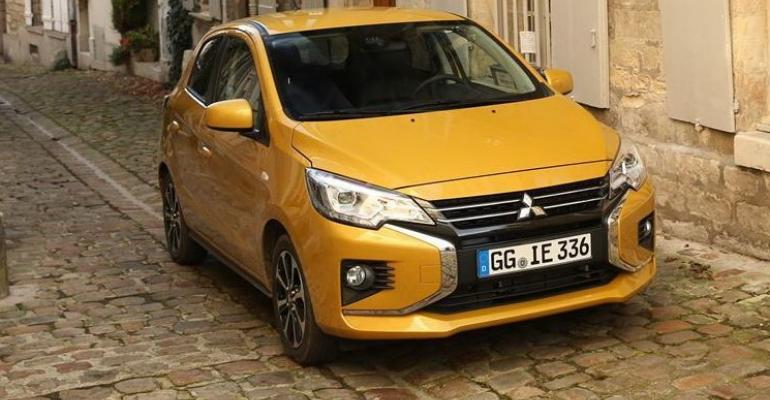 Mitsubishi wants the Space Star to shed its low-end image.

MADRID – Mitsubishi facelifts its Space Star urban car in a bid to maintain the Japanese automaker’s sales momentum in Europe.

An A-segment vehicle with dimensions (151 ins. [3,840 mm] long) that correspond to the B-segment, Mitsubishi has rebadged the Mirage the Space Star in European markets and given it a front end similar to that of its ASX sibling.

The ’20 Space Star has a larger grille, larger redesigned headlights and two chrome C-shaped elements that enclose the grille on the sides, while the front skirt of the bumper is more prominent.

At the rear, changes appear in the bumper and design of the LED taillights, as well as new alloy wheels. New body colors include Bronze Sand and White Diamond.

An infotainment system with a 7-in. (18-cm) screen allows smartphones to be linked and integrates a navigation system, as well as USB sockets and digital radio.

With all these changes, Mitsubishi is trying to make the Space Star lose its low-end image.

Power comes from an 80-hp, 1.2L gasoline 3-cyl. A 5-speed manual transmission and a CVT are offered.

Meanwhile, Eric Wepierre, the new president and CEO of Mitsubishi Motors Europe (MME), says the automaker overcame an unpredictable market in 2019 to achieve a 4% sales increase.

According to Wepierre, the brand’s flagship, the Outlander PHEV, remained the best-selling plug-in hybrid vehicle in Europe last year. Since its launch in October 2013, Mitsubishi has sold 159,132 Outlander PHEV units in Europe.

The Outlander PHEV and Space Star represented 43% of MME sales in 2019, he says.

Mitsubishi posted record 2019 results in Spain, an otherwise down market where sales grew 10% thanks largely to the Outlander PHEV, Eclipse Cross and ASX. Spain ranked behind only Germany and the U.K. in Outlander PHEV deliveries with 17,769, up 10% from 2018.