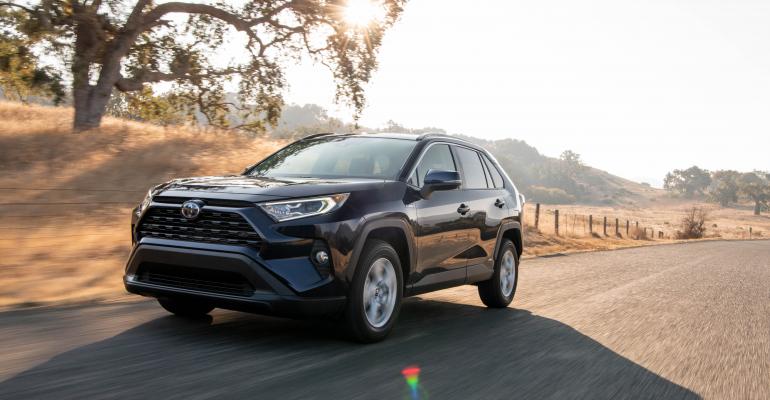 Survey says 36% of Millennials want next vehicle to be EV or hybrid (such as Toyota RAV4 Hybrid, pictured).
Industry News

Millennials, representing 30% of the global population, seem to be embracing vehicle ownership as much as prior generations, even if they live in cities.

While there may be a perception Millennials are uninterested in having a vehicle, a new study proclaims most of them want their own transportation.

Given a perceived environmental consciousness and thrifty nature, plus “lots of other options in terms of ride-hailing and public transportation…we went into this thinking there may not be a (positive) response by Millennials in terms of car ownership, and what we found was actually the complete opposite,” Mark Kwilosz, head of the North American Auto Industry practice at business consultancy Duff & Phelps, tells Wards.

Duff & Phelps surveyed 2,150 Millennials and found 75% intend to purchase or lease a vehicle within five years.

“We think that’s great news for (the) automotive industry, especially when they’re staring in the face declining car sales this year globally,” he says, adding Millennials represent 30% of the world population.

Millennials, those born between 1980 and 1996, were queried online in North America, Brazil, parts of Europe, India, Japan, Singapore, Hong Kong and China. About 500 responses came from the U.S., with the remainder split relatively evenly among the remaining countries.

Not surprisingly, given more than half of the group now is in their 30s, 75% of respondents say they already own or lease a vehicle. Of those people, the intention to purchase or lease another vehicle is even higher, 83%. Of those who don’t own or lease currently, 55% say they plan to in the next five years.

For those who identified themselves as living in cities vs. rural areas, 80% of respondents plan to buy or lease a vehicle in the next five years.

Kwilosz doesn’t have a breakout between respondents in their 20s and 30s but assumes ownership and intention-to-own percentages are higher for those in their 30s, given they probably have or are starting families, making vehicle ownership or leasing more attractive.

“(They’re) maybe starting to see the value of car ownership, now that they have families and now that they need to drive around their kids, potentially, and take them to sporting events or other activities,” he says.

Duff & Phelps believes there’s further good news for OEMs in the survey, as roughly a third of respondents expressed interest in their next vehicle being a hybrid or EV.

Due to strengthening fuel economy and emissions regulations, Wards Intelligence partner LMC Automotive forecasts 1,008 hybrid, plug-in hybrid or battery-electric vehicle nameplates will be offered globally by 2026, based on projected production. That’s up from 201 offered in 2016 and 702 expected next year.

Some 36% of respondents say they want a hybrid or EV as their next vehicle, over those with a gasoline or diesel powertrain, the survey says. “So based on that data, Millennials could potentially drive demand for that vehicle type going forward,” Kwilosz says.

Interest in EVs and hybrids was higher in China than in other countries, 61%, which could be linked to the Chinese government’s electrification push making the alternative powertrain types top of mind for Millennials. However, the Chinese government next year will rescind subsidies for plug-in hybrids and EVs, which has caused their sales to slump this year while sales rise of traditional (non-plug-in) hybrids.

Interest for EVs and hybrids also is high in Singapore, Kwilosz says, where electrification too is drawing a lot of government attention.

In the U.S. and Europe, the share of Millennials expressing interest in buying or leasing an EV or hybrid was closer to the global average of 36%, Kwilosz says.

In further news that should please OEMs, 75% of those surveyed say they’d rather own or lease their own vehicle than use a ride-hailing service, even if the cost was the same.

While ride cost-per-mile in Uber or Lyft vehicles in the U.S. generally is more expensive today than owning or leasing, the question supposes that may not be the case in the future.

“We still think there’s a place for (ride-hailing), but it does appear that owning or leasing a car, for this generation, seems to have significant value,” Kwilosz says.