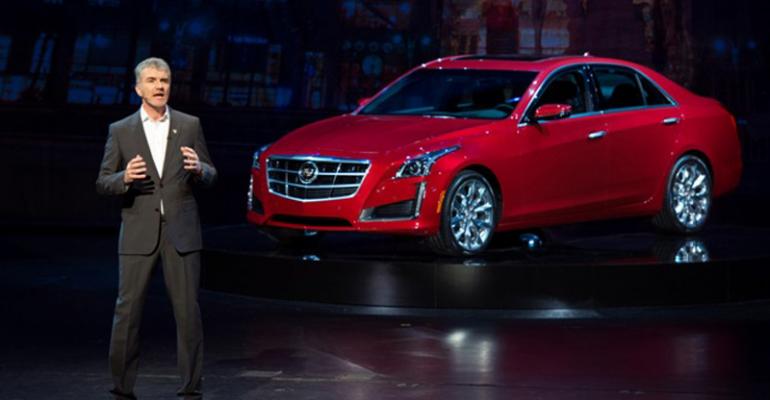 GM installed Adams for two primary reasons: He has the management chops, insiders say, and from years in Europe knows top-tier luxury.

Adams was appointed executive director-Global Cadillac Design last year, coming to the brand’s studios here outside Detroit from Adam Opel, where he had been brand champion for GM’s German unit and its U.K. sister Vauxhall since 2007. The London native continues in that role.

GM installed Adams at Cadillac for two primary reasons: He has the management chops, insiders say, to perform the difficult ballet of motivating stylists to churn out winning designs without upsetting their sometimes delicate sensibilities.

From his years in the European design community, where Adams worked at Ford before joining Opel in 2002, he also knows top-tier global luxury and the importance of progression and continuity at the premium brands.

It also is no coincidence that a European now runs Cadillac design, collaborating closely with the brand’s engineering chief Dave Leone and marketing boss Bob Ferguson, as it makes its most aggressive international bid ever.

Adams chooses more direct rhetoric: “I want to kick the Germans’ backsides. They think they have it sewn up, and we’re going to attack it our way. We have a special formula.”

A holder of engineering and design degrees from the Royal College of Art in London, Adams’ public coronation came in January at the Detroit auto show where he introduced the ’14 Cadillac ELR extended-range electric vehicle.

Earlier this month, Adams took the stage at the Lincoln Center in New York on the eve of the auto show there to introduce the ’14 Cadillac CTS, arriving later this year and seen as the brand’s first credibly prestigious luxury sedan.

The ELR and CTS come to U.S. dealers just months after the ATS and XTS, which now bookend the Cadillac lineup. The ’13 ATS serves as the brand’s first true compact sports sedan and the linchpin of its global expansion plan, while the ’13 XTS represents Cadillac’s most technologically advanced production vehicle thus far.

Sales of the ATS and XTS are boosting Cadillac’s overall volume this year. First-quarter deliveries were up 37.9% year-over-year to 42,712, compared with a decline of 23.6% in the first three months of 2012, according to WardsAuto data.

GM also refreshed the Cadillac SRX for ’13, and the 5-passenger cross/utility vehicle’s 12,856 deliveries in the first quarter left it second in the segment behind the perennial leader, Lexus RX.

Adams contends Cadillac has gained momentum.  “The brand has traction. People are looking at our cars that may not have before,” he says.

But Cadillac remains the No.4 luxury brand in the U.S. with 42,712 first-quarter deliveries, more than 30,300 units behind No.1 seller Mercedes-Benz. Acura and Audi are nipping at Cadillac’s heels.

Adams says the sales numbers prove much work lies ahead.

“We’ve got the core products there, and then when we go with the next wave of vehicles we are going to bring to market, they will have appeal way beyond where Cadillac is today,” he says.

Those cars, trucks and CUVs, according to a WardsAuto product cycle, include a redesigned Escalade large-SUV lineup and XTS hybrid next year; an SRX hybrid and flagship ZTS large sedan in both traditional and hybrid forms in 2016; and a luxury CUV in 2017.

Stylistically, expect those vehicles to contain the precision, quality and technology of Cadillac’s German peers, Adams says, but with a dash of American glamour.

The third-generation CTS, for example, offers eight different interior options, including six 2-tone combinations, and is trimmed in real wood, carbon fiber and aluminum with premium leathers and cut-and-sew stitching meant to reflect craftsmanship and refinement.

The wide selection recalls an era of custom ordering and is designed to cover the breadth of customer preferences from touring to performance.

“If you’re into German automobiles and you’ve never bought anything but a BMW, OK, that’s fine. But I think there are a lot of people out there looking for a warmer sense of luxury and a little glamour. That’s where we can enter different territory.

The brand’s Art & Science design philosophy will continue to evolve. The new CTS, for example, uses the same taut, linear shapes the first-generation model brought to market a decade ago but in a more sculpted and sophisticated way, Adams says. He points to the hood of the new model, which features sharp lines with sculpture in between.

“As the brand grows, you will see it consistent to that philosophy,” Adams says. “If you look around the world, all great brands are built around a consistent drumbeat. Know what you stand for but move with times, be leading edge and up front.”

However, he also says it is a time to be realistic. As far as Cadillac has come in recent years, many miles lie ahead. The brand’s resurgence will be built upon many small successes, not leaps and bounds, in a competitive segment populated by long-established names such as Mercedes-Benz.

“It’s a long, long journey to build a brand,” Adams says. “And when you are fighting with the premium brands, including one of the very first in the automotive world, that’s a hell of a tough crowd, but we are going to do it our way.”