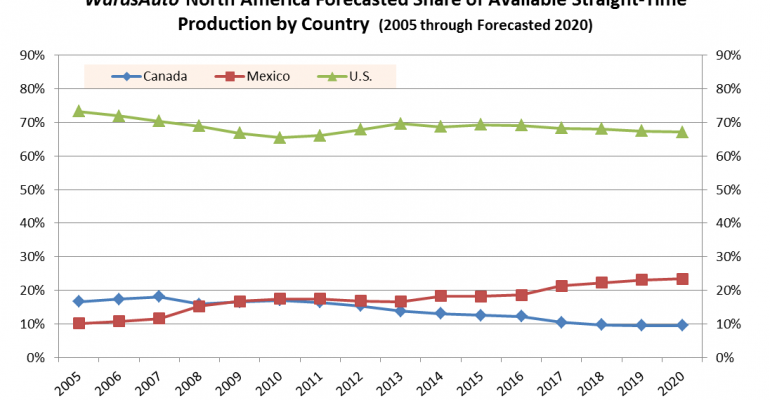 Including estimates for overtime, Mexico automakers conceivably could build over 2 million units more in 2020 than in 2014, pushing total production well above 5 million.

New plants in Mexico and capacity expansions in the U.S. will give North American light-vehicle manufacturers the capability to build nearly 20 million light vehicles annually on straight-time alone by 2020, based on WardsAuto’s latest analysis.

However, Mexico, with three new plants opening in the past 12 months and four greenfield sites coming in the next five years, will have the bigger increase in available production.

Available production is defined as straight-time capacity based on the expected assembly-line schedule for each facility. Criteria include number of daily shifts or whether a plant works a 3-crew schedule and the typical number of holidays and vacation downtime. The calculation also accounts for long-term tooling shutdowns.

In 2014, available production for North American automakers stands at 17.8 million units, and is forecasted at 19.7 million in 2020.

With production expected to finish 2014 at 16.8 million units, automakers will build to a healthy 94.5% of available straight-time output. Forecast production in 2020 of 18.3 million units means 93.0% utilization of available straight-time, high enough that stronger-than-expected demand in that year for North-American-built products easily could lead to increased capacity through additional shifts or 3-crew schedules.

Although Mexico factories will account for only 25% of North American production in 2020, compared with 66% in the U.S., they will be the biggest beneficiary of capacity growth.

Of the North American increase in available capacity in 2020, 1.3 million units will come in Mexico and 1.0 million in the U.S., which will get its increase from additional shifts and more 3-crew schedules. Canada will undergo a decline in available output of 440,000 units due to production from some of its plants being moved to the U.S. and Mexico.

A lot of variables could play into the ultimate capacity mix, such as unanticipated changes in exchange rates, labor issues, politics, economic growth and demand inside and outside North America; much of the capacity increase in Mexico hinges on export production to overseas markets, especially South America.

But, all things considered, there is more upside potential from the forecast for Mexico factories compared with those in the U.S. and Canada.

Including the recently opened new plants, greenfield sites in Mexico could add an estimated 500,000 units of available production by 2020 above the forecast total without new construction. That could be done by adding shifts or going to 3-crew schedules and would bring the available production increase to 1.9 million units.

Adding estimates for overtime means Mexico plants could build over 2 million units more in 2020 than the forecast total for 2014, pushing total production well above 5 million for the year

WardsAuto is forecasting Mexico light-vehicle production in 2020 of 4.5 million units, a still-hefty 1.3 million above the 3.2 million expected this year.

Although it already is a global melting pot to a large degree, Mexico will become an even larger base for global manufacturers and platforms.

Including Fiat-originated platforms at Fiat-Chrysler, nearly two-thirds of production in Mexico will come from overseas-designed platforms by 2020, up from 55% this year and 41% in 2006.

In 2017, Asian-designed platforms will outdo North American versions for the first time, and in 2020, European-engineered vehicles will account for one-in-four LVs made in Mexico, up from a one-to-five ratio in 2014.

Small cars, half the production mix in 2014, will remain the dominant vehicle built in Mexico in 2020, but capacity increases for CUVs, luxury cars and, to a lesser extent, vans, will give them bigger pieces of the pie. Pickups also will remain a significant part.

In addition to automakers building new plants, long-established manufacturers Ford and General Motors are forecast to add capacity in Mexico through existing facilities.

Ford is expected to eventually squeeze more volume out of its Cuautitlan plant once it retools for new products there later in the decade. GM’s gains will be even bigger as it increases available capacity at its Ramos Arizpe and San Luis Potosi plants, mainly for production of small cars and CUVs.