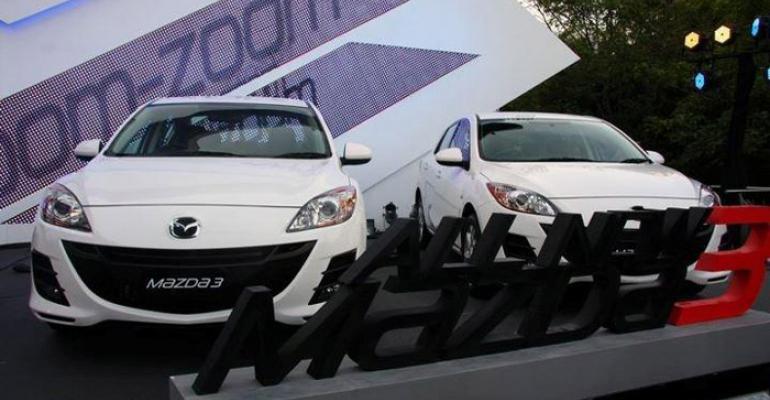 The auto maker aims to play a tight and focused game. As a smaller player, it is coming at the market with a different approach by offering more distinctive vehicles, with a streak of flair and sportiness but at affordable prices.

BANGKOK – Riding a first-quarter sales surge, Mazda Thailand is looking to break through the status quo of its bigger Japanese rivals here by broadening the offerings on its two key small passenger cars, the B-segment Mazda2 and C-segment Mazda3.

The Mazda2 gets considerable equipment and trim upgrades, while the Mazda3 adds an entry-level 1.6L engine to complement the current 2.0L. The moves significantly push the brand forward in the competitive lower C-segment, where it will go up against front-running models from Toyota, Honda and Chevrolet.

Mazda aims to play a tight and focused game in Thailand. As a smaller player, it is coming at the market with a different approach by offering more distinctive vehicles, with a streak of flair and sportiness but at affordable prices. By maximizing its available resources, the auto maker hopes to take a bigger slice of the pie.

That strategy started late last year with the new BT-50 midsize pickup that threw out the traditional truck-styling rulebook in favor of a bold approach that imbued the vehicle with more car-like amenities. So far, the risk is paying off.

Now Mazda is looking to leverage its key passenger cars. In his speech at the launch of the new versions of the Mazda2 and Mazda3, Choichi Yuki, managing director-Mazda Sales (Thailand), reckons the time is right.

He points to the overall market growth Thailand has seen over the year’s first four months, up 20% from flood-ravaged 2011 to 340,000 units, and says the introduction of the Mazda3’s new 1.6L version “will help strengthen the company’s product lineup.”

With its focused lineup, Mazda now is represented in segments that account for well over three-quarters of the Thai market without the need to overinvest in niche models.

He believes the Mazda3 is a “special model that helps to strengthen the auto maker’s “zoom-zoom” tagline in Thailand, with 35,000 units sold to date.

The Mazda3 has been the leader in the 2.0L sub-segment for some time, with a 40% share. However, Yuki says the 1.6L market is an area where the auto maker still can expand its customer base.

He has high hopes for the new 1.6L entry and has set a target that would double the rate of Mazda3 sales, which last year totalled 5,476 units – when the range consisted solely of the 2.0L model.

“The introduction of the 1.6L version will help us achieve the 5,000-unit target for the Mazda3 (for the) second half of the year.”

Yuki believes Mazda’s strong brand image comes from “customer satisfaction, quality and credibility,” and gives him confidence in the prospects for the less-costly, more fuel-efficient addition to the Mazda3 range.

The revamped Mazda2, with upgrades under and including the skin, will continue to be the leading B-segment choice in terms of “higher levels of function and performance,” Yuki says, while also offering “excellent value-for-money” with a starting price of TB550,000 ($17,379) and ranging up to TB705,000 ($22,277).

The Mazda2 is something “truly different from eco-cars and other B-segment cars,” Yuki says, helping it stand out in the market.

Marketing Director Sureetip La-Ongthong Chomthongdee says competition in Thailand’s B-segment is intense. To keep up with the pack, Mazda has adjusted its strategy to help “freshen up the Mazda2 and maintain its popularity by introducing additional best-in-class features.”

Yuki says the new Mazda2 and Mazda3 versions represent more than just launching new models in a highly competitive market. They also help stimulate and create color and excitement for the new-car market, as well as strengthen the company. “This is the chance to make Mazda a household brand in the future.”