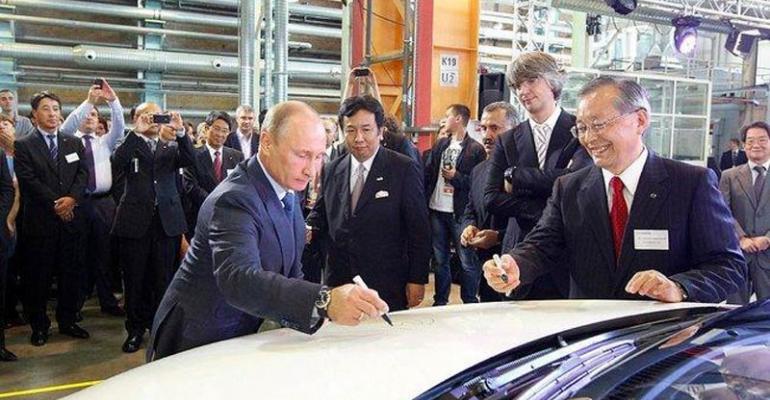 Given its recent history, it&rsquo;s almost unimaginable that Mazda finds itself on track to report a &yen;45 billion profit for the fiscal year ended March 31 and, if analysts are correct, set to double earnings for fiscal 2013 and possibly triple them in 2014.

HIROSHIMA – It may be too soon to talk about legacies, but Mazda President Takashi Yamanouchi is building a record that could place him among the most influential executives ever to lead the storied auto maker.

Now 68 and looking fit, Yamanouchi took over as president in November 2008, two months after the Lehman Brothers bankruptcy triggered the worst global recession since the 1930s.

Several weeks later, the yen began its historic climb against the dollar and euro and stayed at hyper levels for the next four years, virtually wiping out earnings from exports, which Mazda depended on for 80% of sales. The auto maker was hit hard.

Just as Mazda was beginning to adjust to the high yen by putting greater emphasis on Asia and emerging markets, Japan was struck by a deadly earthquake and tsunami in March 2011, which shut down domestic vehicle production for the better part of three months, only to be followed half a year later by flooding in Thailand, disrupting operations there as well.

Coinciding with Yamanouchi being named CEO, Mazda’s largest shareholder, Ford, sold off 20% of its controlling equity stake on Nov. 18, 2008, effectively leaving the Japanese brand on its own. Ford since has lowered its holding to 3.5%.

Given this recent history, it is almost unimaginable that Mazda, known for nifty sports cars and rotary engines, finds itself on track to report a ¥45 billion ($456 million) profit for the fiscal year ended March 31 and, if analysts are correct, set to double earnings for 2013 and possibly triple them in fiscal 2014.

Even with the dollar and euro mired at $1:¥80 and €1:¥100 levels, Mazda had projected a ¥25 billion ($253 million) profit prior to the recent upward revaluation of the two major currencies. Through the middle of last week, the dollar and euro had risen 20%.

Prospects for even further gains now are likely in light of the Bank of Japan’s April 4 announcement that it planned to ease the nation’s monetary policy in hopes of stimulating the economy. At Monday’s market closing, the exchange rate stood at $1:¥98.7 and €1:¥128.3.

Yamanouchi remains guarded about Mazda’s prospects. In an interview at the auto maker’s headquarters here, the straight-talking executive says, “We expect some positive impact in the fourth quarter,” then cautions that the period “tends to be our biggest sales quarter while also benefiting from the full effect of cost-cutting throughout the year.

“Of course, if the current (foreign exchange) situation holds steady, we expect a brighter financial outlook.” Not taking anything for granted, he adds, “We also can expect greater competition.”

Whether or not that’s the case, industry analysts have turned decidedly bullish on Mazda and not just because of the forex markets, but also because the auto maker apparently has made good on promises to cut costs in platform development through vertical, or top-down, integration of its model lineup.

The first two of eight SkyActiv models introduced to the market have been well-received by consumers. SkyActiv is Mazda’s trade name for a series of technologies, mostly involving conventional powertrains, developed to boost fuel economy and engine output.

The CX-5 cross/utility vehicle launched in February last year won Japan’s Car of the Year honors in December. And based on early reviews of the Mazda6, the stylish car (sold in Japan as the Atenza) could be another contender.

When the first-generation Mazda6 debuted in 2002, Mazda indicated the car would be profitable at $1:¥95 levels.

Chris Richter, senior analyst at CLSA Asia-Pacific Markets, says Mazda “is the most tenacious in the world doing what they do with so little,” meaning it limited cash reserves. The auto maker’s debt-to-equity ratio still stands at 102%.

Yamanouchi declines comment on the exchange-rate breakeven point for other SkyActiv models in the pipeline, including upgrades to the Mazda3/Axela and Mazda2/Demio, other than to say the auto maker has adopted the same design philosophy.

He also advises a rotary car will not be among the eight new models, downplaying speculation the rotary engine’s revival is imminent. Mazda phased out the RX-8 last June. He does confirm the engine is alive and well but probably will not be put into a product program until after the midterm business plan is complete, likely after March 2016.

“I am aware that the rotary is an iconic engine for us, and it clearly falls under the general umbrella of our ‘Zoom-Zoom’ concept, as it offers enormous driving fun,” Yamanouchi says. “But it is not an environmental engine, which is the centerpiece of our SkyActiv strategy.”

Mazda, which unveiled its SkyActiv powertrain lineup at the 2009 Tokyo Motor Show with prototype gasoline and diesel engines and a compact 6-speed automatic transmission, aims to boost fuel economy an average 30% by fiscal 2015.

The engines, in particular the clean diesel, have been well-received, and the auto maker since has added a 6-speed manual transmission, stop/start, a micro-hybrid device using regenerative braking energy and a capacitor to power air conditioning and other electrical components.

All of these systems are available on the new Mazda6.

The next step in SkyActiv technology? “Probably lean-burn,” Yamanouchi says.

He does not say whether Mazda’s first hybrid, due in early 2014, will be among the eight SkyActiv models, but stresses the car will combine the auto maker’s SkyActiv technology with Toyota’s hybrid technology. The model will be sold only in Japan.

Yamanouchi also declines to discuss plans for advanced powertrains technologies and whether, for instance, Mazda might join Toyota and BMW in fuel-cell and lithium-ion battery development or if and when it might introduce a plug-in hybrid.

But he clearly does not believe focusing on conventional powertrains, as Mazda has done through its SkyActiv strategy, will handicap it from reaching post-2016 emissions standards when cars sold in the U.S. are expected to boost fuel economy from 34.5 mpg (6.8 L/100 km) to 54.5 mpg (4.3 L/100 km) in 2025.

“Many market forecasts expect electric vehicles to comprise only 3% of global auto demand (by the end of the decade), which means, assuming demand grows to 100 million units, 97% of cars, including an estimated 10 million hybrids, will still use internal-combustion engines,” Yamanouchi says.

“That’s where our main focus will be.”

Mazda Builds Production Base Outside Japan

Increasingly, Mazda’s focus also will be outside Japan, where the auto maker finally is building a production base to mitigate the effects of exchange rates.

By the time the rollout is completed of all eight SkyActiv models, which it estimates will account for 80% of Mazda sales, Yamanouchi predicts the auto maker’s global production will grow to 1.7 million units, up from 1.2 million last year.

More importantly, half that total, 850,000 units, will be built in Thailand, China, Russia and Mexico. “All growth will be overseas,” says Yamanouchi, “and most will be in emerging markets. We are building resistance to exchange-rate fluctuations.”

Adds CLSA’s Richter: “Once Mazda opens its Mexican plant and starts churning out Mazda2s and (Mazda) 3s, the potential will finally be there for a virtual cycle to generate cash flow to help localize further.”

The $650 million facility is scheduled to come onstream early next year in Salamanca, Mexico. Planned capacity is 230,000 units annually, including 180,000 Mazdas plus 50,000 subcompacts for Toyota. Speculation is the Toyota car will be the next-generation Yaris.

Elsewhere, Mazda began CX-5 production at its joint venture with OJSC Sollers in Vladivostok, Russia, last autumn, while Changan Mazda Automobile and FAW are gearing up, respectively, to build the CX-5 and new Mazda6 in Nanjing and Changchun, China. 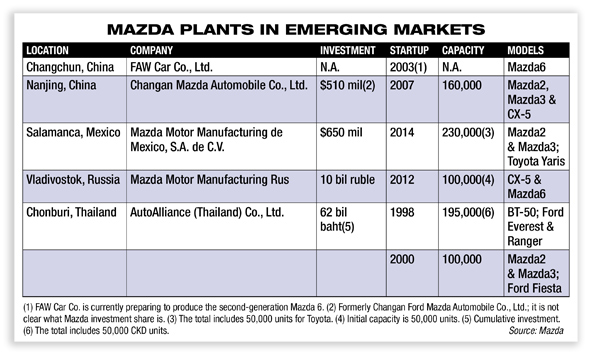 Details have not yet been disclosed, but it’s almost certain the factory will make transmissions for the next-generation Mazda2 and Mazda3, both of which will be assembled 3 miles (5 km) south at AutoAlliance (Thailand), Mazda’s joint venture with Ford.

For Mazda, having an overseas manufacturing base dedicated to its brand is the ultimate nirvana. Efforts at piggybacking on Ford operations, particularly in North America and Europe, had mixed results. More times than not they were linked to Ford’s global product strategy and cycle plan, rather than Mazda’s.

Witness the Tribute CUV twin to the last-generation Ford Escape, built by Ford for Mazda and never meeting expectations. Or production of the Mazda2 assembled at Ford of Europe’s Valencia, Spain, plant; production stopped after just four years.

Other failure included the first-generation Mazda6, produced at a Ford-Mazda joint venture plant in Flat Rock, MI, and only meeting Mazda’s volume targets in two of 25 years before ending production last August.

Partnership With Ford on Diverging Path

Although Yamanouchi says no decisions have been made regarding future products at the partners’ AutoAlliance (Thailand) facility, it is unlikely the relationship will continue as currently structured.

“It’s not impossible (that we will produce the same models),” he says, “but whether we’ll do it is another matter. Ford, for instance, might build a second plant in the area.” At present, the auto makers manufacture the Mazda2, Mazda3 and Ford Fiesta at their joint plant south of Bangkok.

“Moving forward, however, it won’t be easy to collaborate on platforms as we did in the past,” says Yamanouchi. “In powertrains as well, Ford is going a different direction with small, turbocharged engines, so possible areas of collaboration are shrinking.”

That said, the two auto makers have committed TB10.8 billion ($369 million) to continuing joint production of their Ford Ranger and Mazda BT-50 pickup trucks in Thailand, and last April anted up an additional TB837 million ($29 million) last April to expand capacity on the line to nearly 200,000 units.

Ironically, the parting of the ways began when Ford managers in Japan helped Mazda create its “Zoom-Zoom” brand concept in the late 1990s. Yamanouchi had a ringside seat, having been appointed director of corporate planning two months after Ford took management control and installed Henry Wallace as Mazda president in spring 1996. 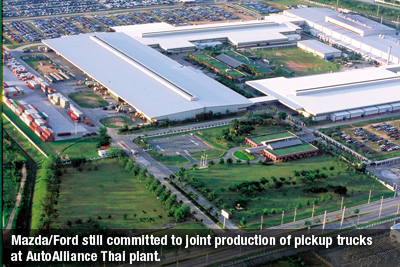 At the time, Mazda, the largest employer in the city of Hiroshima, was on the verge of bankruptcy, running up ¥69.5 billion ($704 million at today’s exchange rate) in operating losses over the three previous years while its debt-to-equity ratio rose to a dangerous 200%.

Yamanouchi’s legacy will be that he took the best from the Ford years – cash-flow management, the importance of brand- and market-driven product development and, perhaps, most importantly, living within its means – and assimilated that with Mazda’s product plan, nimble operations and engineering tradition.

“We were like a frog in a well,” Yamanouchi recalls. “We also learned what our position in the global industry should be,” which is, don’t try to be everything to everybody, and big isn’t necessarily better.

If Mazda delivers on its midterm business plan, it will have a 2% share of global vehicle demand with a 6% operating profit margin and be far less exposed to the currency markets.

“Four years ago, we effectively became an independent company again,” Yamanouchi says. “Since then, we’ve tried to find a path for survival. In the past, we depended on Ford whenever a serious problem arose. My goal was to enhance our brand and, through our SkyActiv technologies, narrow our target market to those for whom ‘Zoom-Zoom’ resonates.

“The Lehman shock and fallout from the yen’s appreciation forced us to place greater emphasis on emerging markets and reform our cost structure. We can’t control everything – natural disasters, political upheaval, exchange-rate fluctuations – but we can restructure to minimize potential damage. We’re still not there.”

If Yamanouchi does get there, that will be quite a legacy.