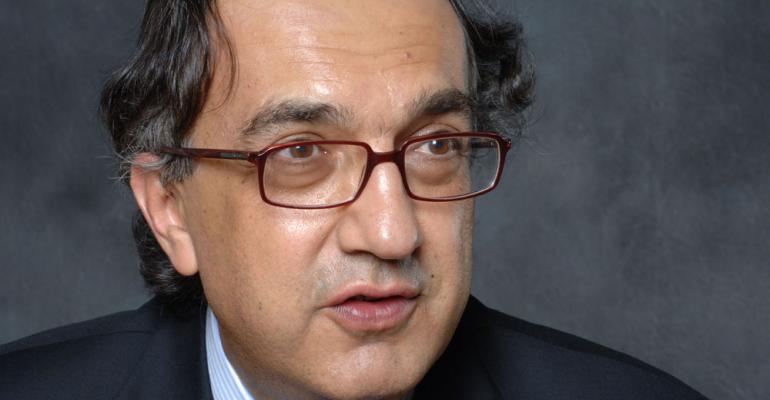 The Dart was intended to attract sport-minded, youthful enthusiasts, lending to Dodge’s image as a performance brand. But inventories quickly exceeded sales last year, with the compact car selling 25,103 units – less than the Ford Focus, Honda Civic and Toyota Corolla each sold in a typical month in 2012.

An otherwise stellar December sales month for the Chrysler Group closed with 173 days’ supply for the Dart, well above the industry’s 69-day average.

Marchionne says he had hoped the Dart would be the first recipient of a ZF-supplied 9-speed automatic transmission Chrysler announced plans for last year. Instead, that will go into Jeep’s upcoming D-segment SUV, which makes its debut at the New York auto show.

“I think the powertrain solutions made available to (the Dart) in today’s world in hindsight were not the ideal solution,” Marchionne says. “We are working diligently now to expand the powertrain offerings in the C-segment. You will see a resolution to this issue when we launch the Liberty successor later this year, because that car will be the first beneficiary of the 9-speed transmission.

That application was unavailable when Chrysler launched the Dart, he says. “We’re spending a lot of time now completing the powertrain grid for the Dart. It’s the best car that we’ve built (in the U.S.) other than the Grand Cherokee. It’ll do well, but it could have done a lot better if we had completed the powertrain solutions.”

The 9-speed transmission is built at Chrysler’s transmission plant in Kokomo, IN, which is being retooled for the technology. Marchionne originally planned for the retooling to accommodate applications for the forthcoming Jeep, not the Dart.

A 9-speed transmission is coming to the Dart, but he does not know when. “If it were up to me, you would have gotten it last night.”

Marchionne also says plans for B- and C-segment Chrysler-branded vehicles that originally were part of the auto maker’s 5-year product plan have been put on ice. The models, one of which was widely rumored to be named the “100” and built on an Alfa Romeo platform, were scheduled to launch for the ’13 model year.

A new Chrysler-brand cross/utility vehicle listed in the 2009 plan and scheduled for a 2013 or 2014 launch won’t be seen this year either. “None of those are coming in 2013, because we changed the order of the product portfolio,” he says, noting the 5-year plan should “probably” be updated.

Resources were poured into fine-tuning the Grand Cherokee for ’14 as new powertrain options, specifically a diesel engine and an 8-speed transmission both debuting here, were not available in 2009.

“That level of intervention for the (’14) Grand Cherokee was not part of the original plan,” Marchionne says. “We’re dragging around a 2009 document that’s a living document that we rework all the time. We shift resources into what we consider more profitable opportunities for Chrysler. The level of money that we spent on this Grand Cherokee…this is a brand-new car.”

The roundtable discussion brings up almost-firm plans for Chrysler’s minivans after months of back-and-forth speculation. There will be one minivan in the auto maker’s stable after 2014, though Marchionne does not say if it will be a Dodge or Chrysler.

Marchionne says a second vehicle, “a people carrier,” will supplant the other minivan, although he does not make clear whether it will be a CUV, SUV or a multipurpose vehicle along the lines of the Ford C-Max or the Toyota Prius V. However, the current minivan could be made smaller to accommodate cars being built on the same platform and for use in other countries.

“For international distribution…a shrinking of the minivan may be required,” he says. “It is a very large vehicle for non-U.S. purposes. The ultimate objective of that architecture is to replace the minivan to do a shorter-wheelbase minivan, but also fundamentally to house a car.

“I can tell you we’re going to be present with both brands in the people-carrier business. Whether both brands have sliding doors or not, that answer I think is pretty well-said. We’re only going to have one minivan with sliding doors. And it won’t be manufactured in the same plant (as the other vehicle).”

Marchionne also is focused on stabilizing Chrysler’s premium brands in the U.S. and Europe. The shaky economic climate in Europe is stalling plans for expansion of the Lancia brand, whose flagship is a rebadged Chrysler 300.

“We have made a determination that we will continue to nurture (Lancia’s) current product offering,” he says. “You will not see any product developments for Lancia in Europe. That’s not to be disrespectful of Lancia – we have to pick where we put our money. As the products die off, they will continue to be replaced by Chrysler Group products.”

Alfa Romeo still is returning to the U.S., Marchionne says, but “my first objective right now is to deal with Maserati.” A refreshed Maserati Quattroporte premium sedan launches at the Detroit show this week.

“That Maserati Quattroporte is the first step in the re-launch of the premium brands,” Marchionne says. A second Maserati car and an SUV – currently built at Chrysler’s Jefferson North plant in Detroit alongside the Grand Cherokee and Dodge Durango – also are coming to the U.S. later this year.

The Chrysler chief does not provide a firm number, but he says there are volume and distribution strategies in line for Maserati.

“This undertaking to try and bring Alfa back is a one-shot deal,” Marchionne says. “We’re not going to execute it poorly. There are things which are in the DNA of the Alfa brand that need to be preserved.”

Any future Alfa Romeo vehicle will not have an American engine, he adds. “We need to be ready with Alfa. We’re not ready.” However, Alfa Romeo is coming here, he promises. “There’s not a single doubt. (But) I don’t want to take my eye off the ball of the execution of the Maserati launch.”

Marchionne also says an upgrade of the Dodge Challenger muscle car is “not far,” without disclosing anything further.