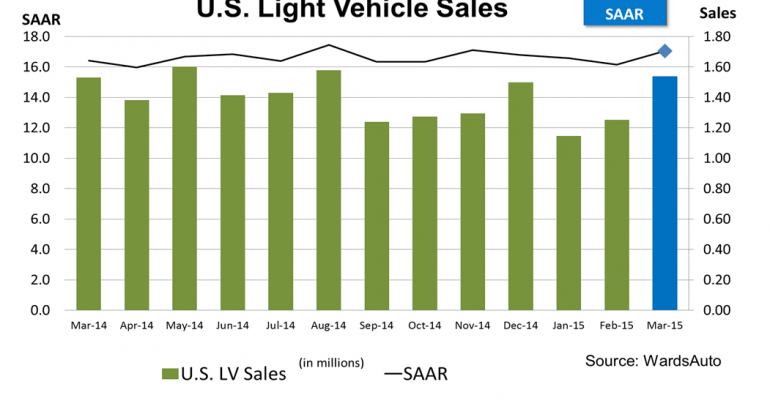 Total March volume was 1.538 million units, a smidgen above the year-ago total. The number was in danger of falling short of year-ago because March 2014’s results were artificially pumped up from recouping sales losses estimated between 50,000 and 60,000 units in the previous two months due to severe winter conditions across much of the U.S.

This year, January-February weather-related losses were negligible compared to 2014 and had only a small positive effect on March’s results. March’s total means sales volumes have increased year-over-year for 13 straight months.

Based on daily selling rates, U.S. sales have posted year-over-year increases in 61 of the past 66 months, including the past 13 straight.

The majority of automakers in March finished close to expectations. However, an upward surge at Hyundai, combined with better-than-expected results from Kia and Nissan, more than offset a shortfall by Honda, which apparently was more negatively impacted than initially thought by lost inventory due to labor issues at West Coast ports in February that delayed delivery of parts to some of its vehicle assembly plants.

After combining for an 11.1% decline in the first two months of this year, sales of the Accent and Elantra small cars posted a sudden 38% gain, leading Hyundai to 16.4% increase in March. Kia’s March sales soared based on huge gains from the recently redesigned Kia Sorento midsize CUV and Sedona minivan. However, the Kia Sportage small CUV posted a whopping 51% increase over same-month 2014.

Although Nissan was above forecast, it still posted just a 1.2% increase from year-ago thanks largely to gains by its CUVs, especially the mid-size Murano and Rogue, and Pathfinder large CUV.

Truck deliveries increased 8.7% from March 2014, with the CUV and SUV segment groups leading the way with increases of 9.9% and 15.4%, respectively.

In fact, except for Small Luxury CUVs and Small Vans, all truck segments posted increases over like-2014.

Sales of large trucks, including luxury vehicles, increased 6.1% with market share rising to 18.4% from same-month 2014’s 18.2%. Big-truck volume might have been higher if GM was not lacking inventory for some of its SUVs and Ford was fully ramped up with its new F-150 pickup.

Even large vans, although only 1.8% of the market, contributed to the big-truck bonanza as new, more fuel-efficient products boosted the segment to a year-over-year increase of 21.2%

Small Pickups, led by new products from GM, increased a robust 44.6% in March, with even the aging Toyota Tacoma and Nissan Frontier recording gains.

Increases in the Small and Luxury Car segments were not enough to offset losses in Middle Cars and Large Cars, and stop a second straight year-over-year decline in total car sales of 0.1%. First-quarter car deliveries are roughly even with year-ago.