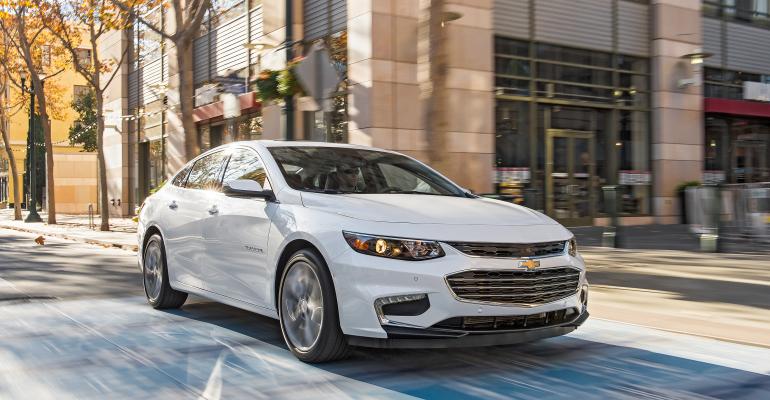 The Chevrolet Malibu being produced in South Korea is proving to be a strong point for GM Korea.

Korea’s No.3 automaker by sales produces the Malibu on the same line as the Captiva compact CUV at its main production and engineering complex in the Incheon suburb of Bupyeong.

It enabled GM Korea to log its best-ever November domestic sales overall with 17,236 deliveries, up 51% year-over-year.

The Malibu leads the Korean midsize-sedan market with better than a 35% share, ahead of Renault Samsung’s second-place SM6 and Hyundai’s third-place Sonata.

Analysts believe the Malibu has further bolstered GM Korea’s market share which apparently has exceeded 10% for the first time in eight years.

The Korea Automobile Manufacturers Assn. has not yet released its market-share breakdown for either October or November, but some industry-watchers believe GM Korea reached 10% as early as October, following September’s determination of a 9.7% share.

The consensus is that the automaker will continue to hold at least a 10% share when December sales are tallied.

The surge in domestic sales occurred after the all-new Malibu formally arrived on the Korean market Sept. 6 after a lengthy delay.

The sedan was shown in Korea in April, but partial strikes by GM Korea workers hamstrung the sales launch until a new wage deal was signed Nov. 2. The automaker says the walkouts cost the production equivalent of 15,000 vehicles during the labor negotiations.

Once released the Malibu was an instant hit and accounted for 26.4% of GM Korea’s total domestic sales in October. After only 800 units had been delivered during the first 20 days of October, 900 were sold on Oct. 21 alone.

To meet demand and reduce delivery delays to about one month, the Bupyeong plant has been working daily overtime and weekends – a boon to workers who lost many days of work to strike activity during wage negotiations that lasted from April to September.

Putting more demand on the plant is GM International’s decision to begin exporting the Korean-made Malibu to the Middle East. Shipments began in August, even before the sales launch of the new model in Korea.

A spokesman tells WardsAuto that 965 Malibu models were exported in August, followed by 1,493 in September and 925 in October. He says November export figures still are being calculated.

The Traxx subcompact CUV, also produced at the Bupyeong plant, further bolstered GM Korea sales, delivering 2,205 units in November, a 125% yearly gain. It was the best month ever for the Traxx since its February 2013 launch.

GM Korea’s mainstay, the all-new Spark, also had a banner month in November, selling 6,553 units in Korea, a surge of 46%.

“GM Korea has enjoyed its best sales performance ever this year. We have received a strong reaction to our products, especially the Malibu, Spark and Trax,”

Dale Sullivan, vice president-sales, service and marketing says in a statement. “We expect the positive sales to continue as we close out the year with the support of our competitive products and aggressive marketing campaigns.”

Sullivan is hoping that when the new Cruze compact launches early next year, reviving production at the 2,000-employee Gunsan plant, that it, too, will be a hit in the local market.

The Gunsan plant has been a thorn in GM Korea’s side in recent years, operating well below its production capacity.

According to the GM Korea branch of the Korean Metal Workers Union, the plant was in production for only 76 of 238 days from January through August, before pre-launch activity for the new Cruze.

The union says production employees worked only one or two days a week during that period 8-month period.