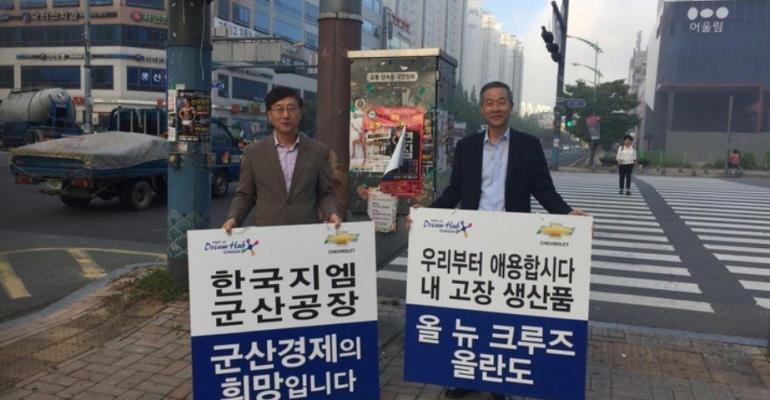 To many, the outpouring of support for the U.S.-owned company is reminiscent of the Korean economic crisis of the late 1990s, when citizens donated family gold jewelry and other precious metals to help refill their nation&rsquo;s empty coffers.

GM Korea is gathering some moral and promotional help from businesses and community leaders in Incheon and Gunsan, two of the cities that would be hit hardest if the struggling company’s current condition deteriorates to a point where facilities are downsized or even closed.

Officials from the Incheon Corporate Council and local businessmen met Oct. 26 with GM Korea officials at the company’s headquarters in the Incheon suburb of Bupyeong to sign a pledge to support the sale of Chevrolet vehicles and help the automaker stage a turnaround.

“This meaningful memorandum of understanding that we have signed today will significantly support Chevrolet sales and vitalization of the Incheon local economy,” said Sang-ki Choi, GM Korea’s regional sales director.

The signing ceremony follows formation by the Incheon government and the Incheon Chamber of Commerce of a GM Korea support organization composed of some 1,200 small and medium-size Incheon businesses, including many GM Korea suppliers.

The new association is working with GM Korea on many marketing initiatives, including displaying Chevrolet vehicles at their office or manufacturing locations and promoting the vehicles to their employees and customers.

Some companies even are conducting door-to-door service, taking customers from their work locations or homes to dealerships to view and try out Chevrolet products.

Workers from the Bupyeong plant reportedly also are volunteering to help the Incheon support organization, even while their union is demanding steep wage increases at a time when the company is on the financial ropes.

A GM Korea spokesman tells WardsAuto, “We strongly expect such promotional support will increase overall traffic to the showrooms this month.”

The spokesman notes GM Korea’s own promotions and deep price discounts have kicked in. The discounts are substantial, running close to 15% in some cases.

He says the company usually offers deep discounts on select vehicles in December to boost full-year sales figures, but this year pulled the discount offers ahead to November and will maintain them through the end of the year.

GM Korea President Not Giving Up

GM Korea President Kaher Kazem is taking steps to try to dispel rumors that the automaker will end its operations in Korea because of recurring annual losses. Kazem is to meet this month with other executives and employee groups to explain the company’s condition and what steps are being taken to make it sustainable.

Local news reports quote Kazem as saying steps to give the automaker a sustainable future may involve introducing new vehicles in the Korean market. It is not clear whether those vehicles would be new models produced at GM Korea plants or would be imports from the U.S. to fill holes in the current product lineup.

To many, the outpouring of support for the U.S.-owned company is reminiscent of the Korean economic crisis of the late 1990s, when tens of thousands of citizens lined up at government offices and donated family gold jewelry and other precious metals to help refill their nation’s empty coffers.

In GM Korea’s case, some analysts say, a true showing of the Korean spirit and community support would occur if the union backed off from its tough wage and bonus demands and worked cooperatively with the company to end three successive years of net losses.

Similar cooperation between workers and management has helped Korea’s smallest automaker, Ssangyong, not only recover but also surpass Chevrolet as the third best-selling brand in the domestic market, after Hyundai and Kia.

Additionally, the county council of Ongjin, in Incheon, has signed a declaration asking local businesses and citizens to buy Chevrolet products. “The economic impact of GM Korea’s operations is huge for Incheon and the automaker desperately needs the support of our government and the municipalities at this time,” the council declared in a statement.

The statement also urges the national government to take steps to ensure parent General Motors does not decide to withdraw from the Korean market.

In the city of Gunsan, where the GM Korea plant is operating at just 30% of capacity producing the Chevrolet Cruze and Chevrolet Orlando MPV, the Gunsan city government has joined with plant workers to hold street demonstrations extolling the value and quality of Chevrolet vehicles.

The Gunsan government and local chamber of commerce have launched a “Buy GM Korea” campaign, trying to boost local ownership of the vehicles produced within their city.

GM Korea also is running a free lottery, with tickets available to anyone who visits a showroom. Each week through the end of the year a nationwide drawing will be held and the winner will receive a Chevy Cruze.

Additionally, five runners-up each week will receive a cash payment of 1 million won, to be used in any manner they choose.

Rumors and speculation about a possible GM pullout from Korea have made potential customers hesitant to consider buying Chevrolet products, some dealers have acknowledged.

One thing is certain, most analysts agree: With sales and revenue falling, costs increasing and an intransigent and strike-prone labor union demanding high wage and bonus increases, GM Korea is just weeks away from posting its fourth successive annual net loss.

The GM Korea branch of the Korean Metal Workers Union still is in wage talks with management. The talks have been suspended until mid-November when a new slate of union officers will have been installed.