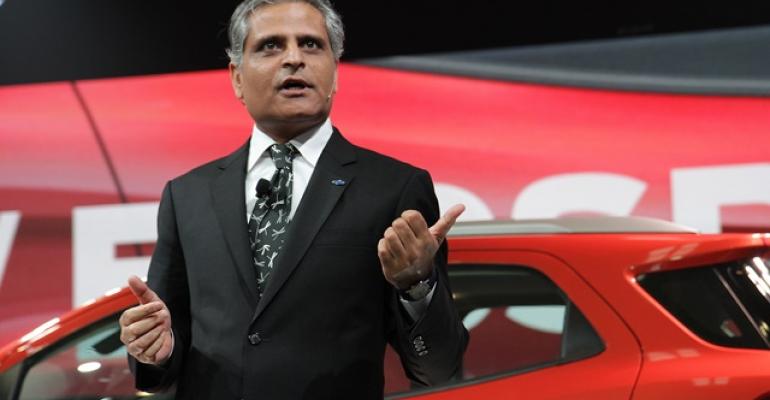 Lincoln Intent on Growth in China

Even though Lincoln is just getting started there, the brand has something many premium makers lack: a rich history of celebrities and American presidents as customers. Still, the brand president says sales in China will not rival Audi anytime soon.

DETROIT – Having opened six dealerships in China since the beginning of November and planning to open two more in the coming weeks, Ford’s Lincoln brand sees vast opportunities in what promises to be the world’s largest luxury vehicle market.

And even though Lincoln is just getting started there, the brand has something many premium makers lack: a rich history of celebrities and American presidents as customers.

After conducting extensive one-on-one interviews with wealthy consumers in China, Kumar Galhotra is optimistic because a strong brand history carries a lot of weight in the country.

“They think of Lincoln as presidential,” says the Ford vice president who became president of Lincoln in September. The brand’s Black Label upscale trim package now being offered in the U.S. is being marketed in China instead under the Presidential moniker.

Luxury customers there think of Lincoln “as a vehicle of celebrities. They mentioned Marilyn Monroe and her Lincoln and Frank Sinatra and his Lincoln,” Galhotra says.

For now, the showrooms in China are offering only the all-new products, the MKZ sedan and MKC CUV. The next-generation MKX CUV eventually will be available, too. By 2016, those vehicles are expected to be among five new products offered there.

Lincoln won’t disclose sales numbers in China, but the brand reports enthusiastic response from shoppers. The first three stores are located in Beijing, Shanghai and Hangzhou.

Succeeding in China requires an embrace of the culture and an understanding that a Lincoln showroom in the U.S. cannot merely be moved across the pond, Galhotra says.

“In China, going to a Lincoln dealership is an experience. People bring their whole family – grandma, grandpa – so that has to be tailored to that culture,” he tells journalists at a media event here highlighting Lincoln’s new 10-year partnership with Harman’s premium loudspeaker brand, Revel, to deliver the quality and precision of a high-end home audio system inside the vehicle.

Future Lincolns, including the next MKX, will offer Revel audio systems with either 13 or 19 speakers, and an executive for the automaker says he expects 50% of customers to opt for it. On current Lincolns, such as the MKZ, MKC and Navigator, THX is the premium audio option.

Tea Is Needed, Not High-Performance Variants

Top-notch sound is one way to win over young, wealthy Chinese consumers. Another is to provide tea in the showroom, Galhotra says.

“Tea is a very important part of the culture,” he says. “So those luxury customers are met with tea, and I’m not talking, out of a teabag.” Instead, every Lincoln store in China has the equivalent of a tea sommelier.

“So we’ve got a tea room with a tea expert in each one of our dealerships, because that is a key part of the luxury experience in China,” Galhotra says.

Although Lexus outsells Lincoln by a wide margin in the U.S. and has more brand cachet, Galhotra says in China, Lincoln and Lexus have an equally favorable image among consumers. Plus, he says Lincoln’s “perception of prestige” among Chinese consumers is ahead of market-leader Audi.

Research aside, Audi vehicles can be spotted everywhere in big cities in China. Asked how long it will take before Lincoln sales in China rival those of Audi, Galhotra says it will not happen soon.

“To build a brand like this takes a very long time. It’s a very long-term commitment by us,” he says. “We are building the product plan, the network plan. We are resourcing it properly both in human resources and capital resources.”

As for the high-performance front, Galhotra also says Lincoln is in no rush to compete with BMW’s M, Mercedes’ AMG, Cadillac’s V or Audi’s S and RS sporty variants.

As desirable as that may be, he says Lincoln must focus on its core products, satisfy its customer base and build brand loyalty by delivering consistently excellent vehicles.

“We are going to very rigorously execute that plan. Beyond that plan, it’s based on the opportunity, whatever the business opportunity would be for us,” he says. “It’s not like I’m being coy or anything. We just haven’t made those decisions yet.”

After the next-generation MKX arrives, Lincoln will introduce an all-new sedan in 2016. Two additional vehicles will come later, closer to 2020, Galhotra says.

The new MKZ, which led Lincoln’s rebirth two years ago, has succeeded in bringing more potential buyers to showrooms, and the brand is conquesting customers at a higher rate, he says. Average transaction prices for the MKZ also are up significantly compared with the prior generation, he says.