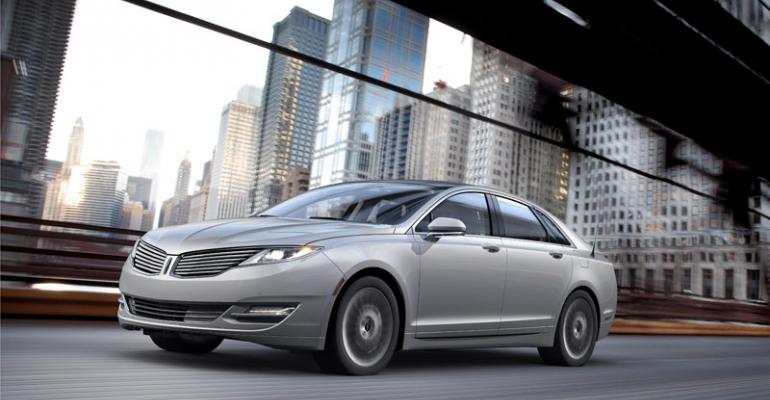 Lincoln Focused on Conversation, Not Criticism, of Super Bowl Ads

The brand&rsquo;s top marketers say interest in the marque has more than doubled thanks to wider exposure, and it&rsquo;s only the beginning for Lincoln&rsquo;s identity makeover.

“Objectively, what we saw was incredible lower-funnel-demand creation,” says Matt VanDyke, director-Lincoln global marketing. “Subjectively, it would have been great if we were the most popular (ad), but that wasn’t our plan going into it.”

The remarks come after a meeting with dealers and during a critical time for Ford’s premium brand. Reintroducing itself to consumers as the Lincoln Motor Company, the auto maker has been hampered by production woes and slow sales.

Deliveries of the revamped-for-’13 midsize MKZ, the centerpiece of Lincoln’s current ad campaign, slowed to a crawl due to post-production quality checks. January sales dropped to lows unseen since the 1980s with only 4,191 units sold, WardsAuto data shows.

In the midst of a rocky start to this year are the much-maligned Super Bowl spots, titled “#SteerTheScript” and reliant on submissions to social media. Ford executives say the goal was to expose Lincoln to a wider audience, but the ads largely failed to win the same kind of praise awarded to standouts such as Ram’s dramatic “God Made a Farmer” or Kia’s quirky “Space Babies.”

“It is infinitely important to us to generate a conversation interest around the brand,” says Jim Farley, Ford executive vice president-global marketing, sales and service. “(It’s) not to be popular, but to have a conversation.”

“Absolutely,” he replies when asked whether potential buyers are talking about Lincoln for the right reasons.

“We could have easily made an ad to win (the) USA Today Admeter (real-time survey of Super Bowl ads), but we needed to move the metrics and start a conversation about the brand way before the Super Bowl,” Farley says, noting that about 250,000 people visited Lincoln’s site to configure an MKZ.

“For us to get a conversation started, it won’t be (about) how popular we are, it’ll be how thoughtful we are.”

Don Chalmers, president of Chalmers Capitol Ford Lincoln in Santa Fe, NM, says it’s too early to know whether the Super Bowl ads have made an impact on Lincoln’s identity, but says he is confident the marque will double its sales by 2015. Overall U.S. Lincoln sales fell 4.0% from 85,643 units in 2011 to 82,100 last year, according to WardsAuto data.

“I don’t know if (consumer care) was consistent throughout,” Chalmers says of the brand’s performance in past years, citing the use of non-Lincoln loaner cars given to Lincoln customers as an example.

Chalmers says dealers are flustered by the MKZ’s delay but respects the auto maker’s decision to commit to quality.

“You’ve got customers that want the cars, and it hasn’t flowed as freely as we would like. Dealers are frustrated with that portion of it,” he says. “(But) we have one chance in this lifetime to reintroduce Lincoln, and we’re going to do it right.”