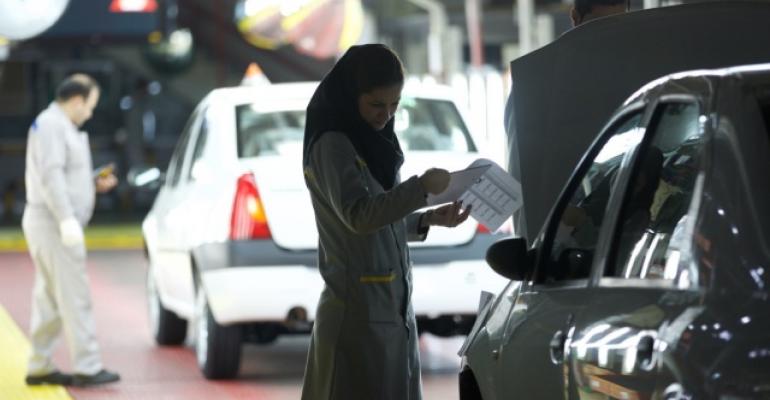 PSA, Renault-Nissan and Suzuki among vehicle makers expected to follow Daimler back into Iran.

VIENNA – The lifting of sanctions against Iran is speeding up negotiations of foreign vehicle manufacturers and suppliers in their race to the Iranian markets. Many companies are in talks to renew old partnerships and create fresh ones.

Based on previous cooperation, Iran Khodro produces PSA’s older models, the Peugeot 206 and 405. While in the past Iran Khodro acted as manufacturer and PSA as technical partner and licensor, current plans call for the creation of a 50-50 joint venture.

Between March 21, 2015, the beginning of current year in Iran, and January 8, 2016, Iran Khodro manufactured 378,939 cars and pickup trucks, with more than 68% wearing the Peugeot badge. However, because PSA stopped cooperation with Iran some years ago, the French company received no royalties for the Iranian-made Peugeots.

IKCO and PSA plan to produce the Peugeot 301, 208 and 2008 models, Jean-Christophe Quémard, PSA’s executive vice president-Middle East and Africa, confirms in an interview with the Iran Daily.

“All these models will be produced in a company jointly shared by IKCO and Peugeot, i.e. each holding a 50% share,” he is quoted as saying. The Peugeot 308 and 508 cars are to be shipped to Iran as completely built-up exports.

“In addition, Citroen has made favorable agreements with Saipa Group,” Quémard adds.

Saipa originally was founded to assemble Citroen models in 1960s, but later switched to cooperation with other automakers and production of models carrying its own brand. It also assembled the Citroen Xantia model in the past decade and now intends to restart the cooperation with the Citroen brand.

“Clearly it is usable, clearly they know how to produce cars,” Vincent says when asked about the production equipment at Iran Khodro. “But something that is most impressive for me is the quality of the Iranian supplier network.”

Vincent underlines that there were local suppliers that had joint ventures with Western suppliers, but the Iranian companies actually have progressed since the embargo began.

“I have visited outstanding suppliers with worldwide (sophistication) level,” Vincent says. “So the manufacturing potential is there.”

PSA repeatedly has been criticized in Iran for ending cooperation with IKCO some years ago with little advance notice, partly because of sanctions but mainly as a result of a shareholding agreement with General Motors.

“We prefer not to focus on the past,” Quémard tells the Iran Daily. “We all know that the sanctions inflicted heavy financial losses on both countries. We were also a victim of the embargoes.”

“To pay forfeiture, one should be guilty. When we left Iran, we were abiding by international laws imposed on us. We cannot ask the U.S. government to compensate our losses due to the embargoes,” he says. “If I was asked who is to blame for the company’s speedy disappearance, I would say the U.S.”

Another foreign automaker expected to announce new agreements with Iran is Renault. The French company currently cooperates with both large Iranian vehicle manufacturers.

“The production process in Iran is the same process we have in other Renault plants,” Bernard Cambier, Renault senior vice president and chairman-Africa-Middle East-India Region, tells WardsAuto. “What we are producing (in Iran) are really quality cars.”

Cambier confirms the Renault Clio, Kadjar and Kwid are among new models that may be manufactured in Iran.

“Iran is really an opportunity, a lot of car manufacturers are discussing being in Iran, but we have some assets there and I am quite confident for the future in Iran,” Cambier says.

Renault has some cash available in Iran.

The first global vehicle manufacturer to make an official announcement after the lifting of sanctions is Daimler. It has signed letters of intent with Iran Khodro Diesel and the Mammut Group.

Daimler had successful business relations with IKD, a commercial vehicle arm of Iran Khodro, for the past 50 years. Even during the sanctions, IKD continued production of heavy trucks under the Mercedes-Benz brand. The areas of cooperation include a joint venture for local production of Mercedes trucks and powertrain components, plus the establishment of a sales company.

The letter of intent was signed by IKCO’s President and CEO Hashem Yekehzare and Wolfgang Bernhard, Daimler’s board member responsible for trucks and buses.

“Iran Khodro has been following a drastically different approach in its new round of international negotiations, where the company insists on joint investment and participation,” Yekehzare says in a prepared statement.

“Daimler commercial vehicles have always had an excellent reputation in Iran,” Bernhard says. “We plan to quickly resume our business activities in the market there.”

The first Mercedes-Benz Actros and Axor trucks could be supplied to the country under the new agreement in the form of complete-knocked-down kits soon.

In addition, there are plans for Daimler to return as a shareholder in the former engine joint venture Iranian Diesel Engine Manufacturing located in Tabriz.

Daimler and Mayan, a subsidiary of the Dubai-based Mammut Group, have signed a distribution agreement for Fuso trucks.

Daimler’s new agreements with Iran even could lead to car assembly in the next step. IKD’s subsidiary Top Khodro assembled Mercedes-Benz cars in the past.

Suzuki Eyes Market; Mazda Back In

Japanese automakers also are planning to profit from the end of sanctions.

Last October, Nikkei reported Nissan had informed suppliers it may resume shipments of assembly kits to Iran for the first time since 2013 this spring. Nissan used to cooperate with Pars Khodro, also a partner of Renault.

Some Japanese vehicle manufacturers continued their cooperation with Iranian companies even during the time of sanctions, including Suzuki. Iran Khodro is assembling the Suzuki Grand Vitara in small volumes. According to company President and CEO Hashem Yekehzare, Iran’s largest vehicle manufacturer plans to significantly increase the business with Suzuki and to offer some new Suzuki models that will be assembled locally or sourced as CBU imports.

Another example is Isuzu and its Iranian partner Bahman Motor. Isuzu commercial vehicles were assembled by Bahman during the last few years. In 2015, Bahman also launched assembly of previous-generation Isuzu D-Max pickup truck.

Bahman is also a long-term partner of Mazda. Cooperation dating back in late 1950s. Bahman is assembling the previous-generation Mazda3 in small numbers. According to Nikkei, Mazda had halted parts shipments to Iran in 2013 and resumed it in April 2015.

In addition, Bahman was producing an outdated pickup under the Mazda brand for many years and only changed the vehicle’s brand from Mazda to Bahman in 2015.