Lexus debuts a 400-kW (536-hp), 311-mile-range (500-km) battery electric concept vehicle Wednesday morning at the 2019 Tokyo Motor Show that hints at a future generation of BEVs due around 2030. The concept’s unveiling comes ahead of the debut next month of its very first BEV.

The LF-30, roughly the length of a Lexus LS and said to be able to accelerate from 0-62 mph (100 km/h) in 3.8 seconds, is Lexus’ “vision for an upcoming generation of electrified vehicles,” the Toyota luxury brand says in a statement released to media ahead of the show.

Up to now, Lexus and parent Toyota generally have shied away from BEVs, as well as plug-in hybrids, preferring to focus on traditional hybrids and hydrogen fuel-cell electric vehicles. Nearly every model in Lexus’ lineup has a hybrid variant, and Toyota recently debuted a second-generation Mirai FCEV based on a Lexus platform. Lexus has no PHEVs currently, while Toyota has one (the Prius Prime) and is planning another (the RAV4 PHEV).

But with PHEVs and BEVs filling the lineups of its German competitors, Tesla a force to be reckoned with in the premium sector and some acknowledgement by Toyota executives that BEVs, not FCEVs, may be the ultimate zero-emission solution if solid-state batteries can be commercialized, Lexus is pushing harder on the alternative powertrain types.

Lexus does not disclose the battery chemistry used in the LF-30, but several photos released to media ahead of the show display the words “solid state” on the driver’s side door sill. Toyota has been a prominent investor and developer of the technology. 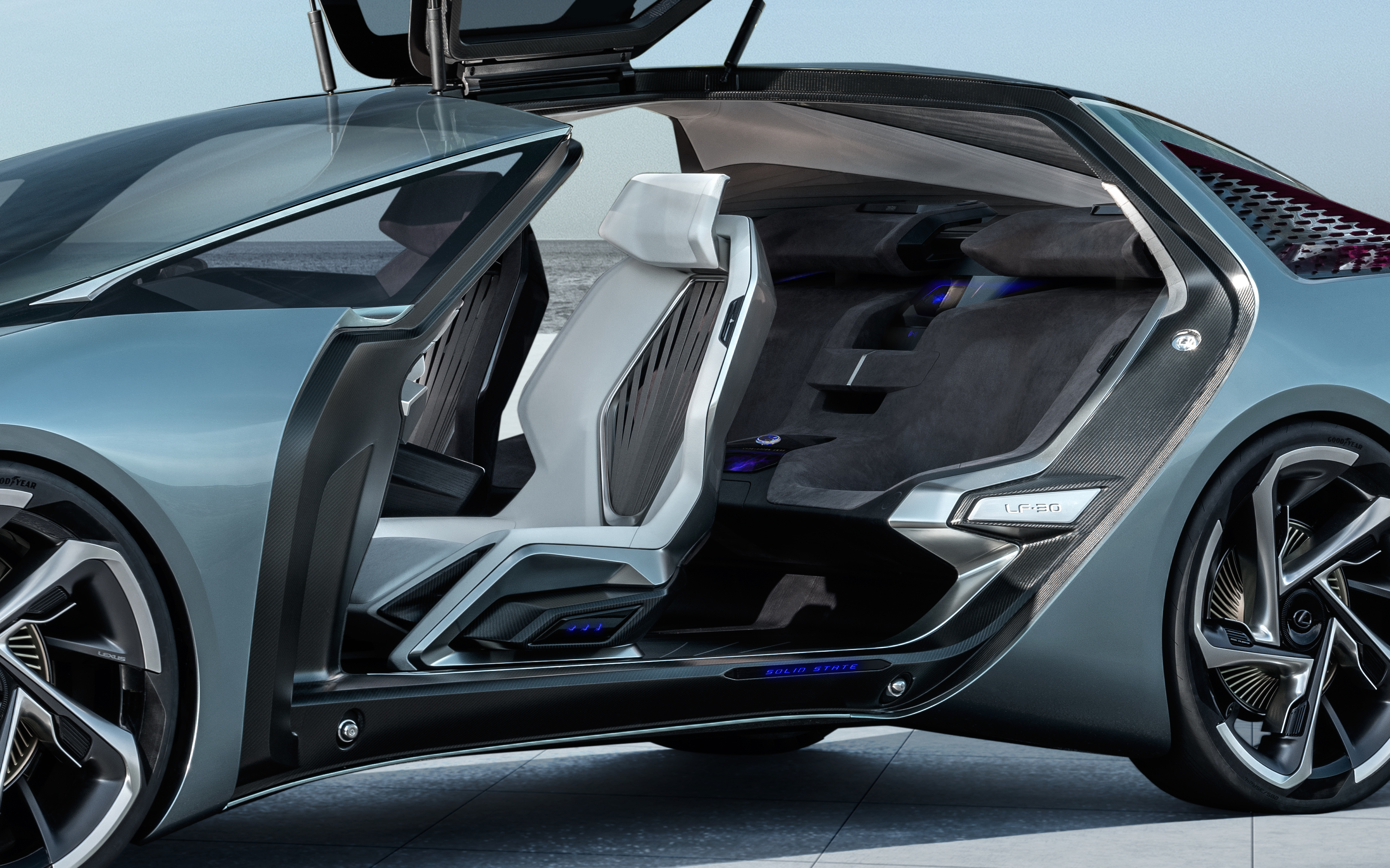 Besides the November unveiling of Lexus’ first BEV, likely to occur at or adjacent to the Los Angeles auto show, the brand says its first PHEV and a new dedicated BEV platform are launching early in the coming decade.

Lexus says by 2025 it will have electrified versions of all its models, with the goal they will outpace sales of conventional internal-combustion-engine models, but it does not specify how many will be hybrids vs. PHEVs, FCEVs and BEVs.

“In particular, the technology of Lexus Electrified enables integrated control of powertrain, steering, suspension and brakes, realizing the ultimate potential of the motor control technology cultivated in (hybrid vehicles),” it says.

The LF-30’s precise electric motor control “enables instantaneous adjustments to (vehicle) posture not possible with conventional vehicles” and regulates drive-power output from the four in-wheel high-torque electric motors “to adjust vehicle posture in tune with human sensibilities.” By dynamically adjusting torque to each wheel to reduce nose pitch, the vehicle’s motion and posture is optimized and the driver’s line of sight is stabilized, Lexus says in a video.

Because front and rear wheels are independently controlled, the LF-30 can adjust between front-, rear- and all-wheel drive, dependent on the driving situation. Lexus Advanced Posture Control is being planned for wide application across Lexus’ future electrified vehicles, the brand says.

The LF-30 has Toyota’s well-publicized Chauffer (self-driving) and Guardian (semi-autonomous) drive modes, as well as self-parking and front-door-pick-up (valet) functions.

The car also includes a “Lexus Airporter,” a drone-support vehicle autonomously controlled to do such tasks as moving luggage from a doorstep to the cargo compartment of the vehicle.

There is onboard AI to determine voices of occupants and set preferences for air temperature, audio and navigation based on their stored profiles. Suspension and powertrain settings also can be adjusted via AI, based on driver preferences.

Steer-by-wire brings about more precise steering feel and flexible turning control, and helps create a sense of openness inside the vehicle by allowing the steering controller to be moved forward during autonomous driving, Lexus says.

The luxury brand says it aimed to create a sense of openness and human-centered design in the cockpit, with keen attention paid to the placement of the head-up display and steering controller-mounted switches so the driver doesn’t have to shift his or her vision away from the road or use manual switches.

Next-generation surfaces can be found inside the LF-30, including a large display using gesture control and another surface projecting vehicle information using augmented reality.

Some environmentally friendly materials are used inside the cabin, including a traditional Japanese charred cedar wood, yakisugi, on the floor and steering controller, and a recycled metal processed into fibers for the pleated door trim.

The front passenger seat was inspired by first-class airplane seats, and the rear seats use “artificial muscle technology to mold to their occupant” and have recline, relax and alert modes.

A Mark Levinson audio system has headrest speakers for an “optimal audio environment (as well as) enhanced quietness” due to a noise-cancelling feature.

The LF-30’s glass roof above the rear seats is where gestures control a SkyGate display window using augmented reality. The window can display navigation, favorite videos or a “realistic star-filled sky.” 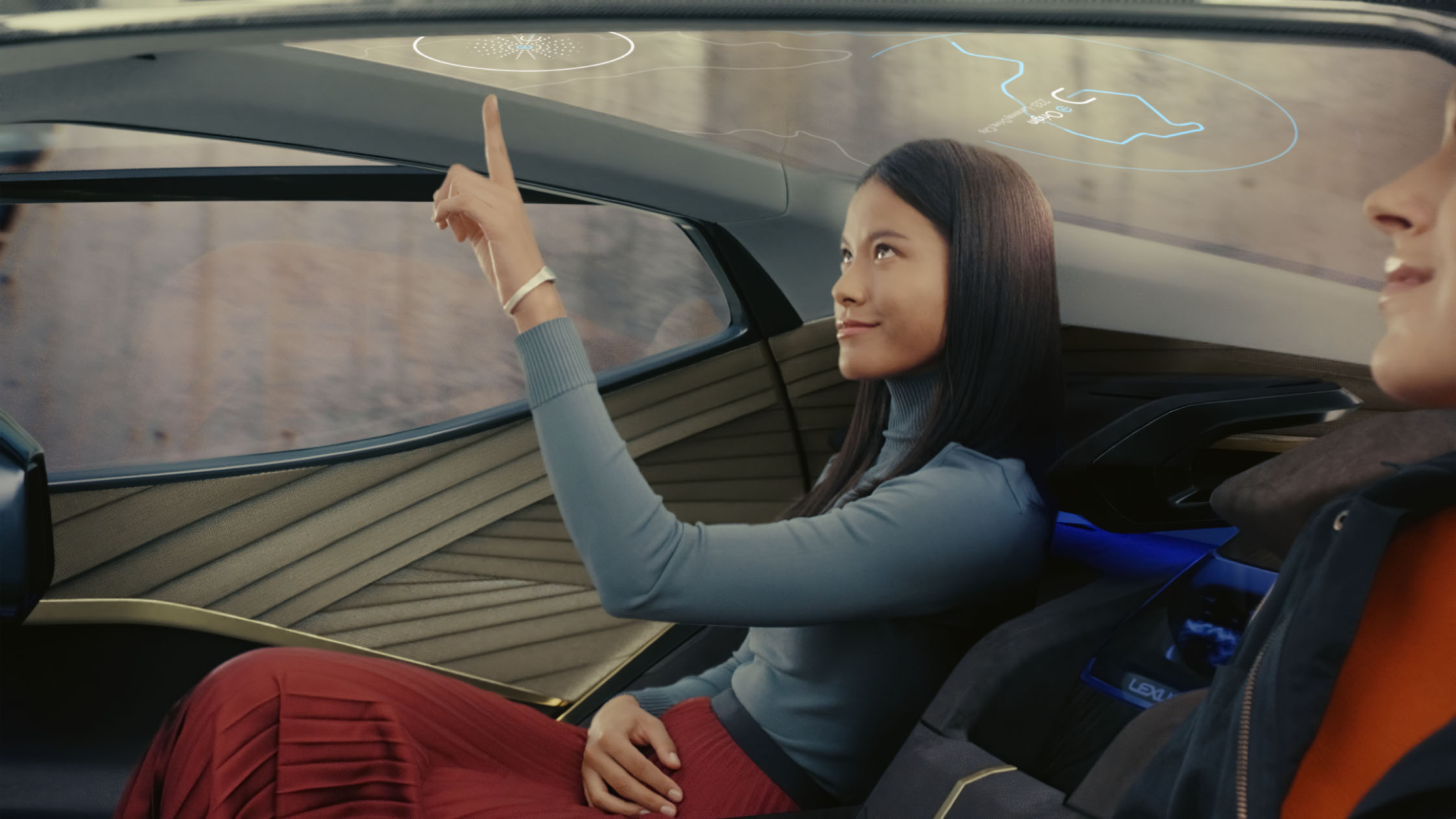 The exterior of the vehicle, painted in a blue-green Voltaic Sky color, is meant to articulate energy flow and features a new variation of Lexus’ spindle grille spanning the entire vehicle architecture, the brand says, with window glass, muscular fenders and wing-shaped headlights forming the grille’s contours.

The front is described as “elegantly flowing” while the rear is said to be “linear and sharp.”

Sharp rear lights and side-air intakes are for style as well as function, aiding aerodynamics and cooling.

Meanwhile, the LF-30’s side windows have adjustable opacity for privacy at night, and the face of the vehicle changes color and luminescence so those outside can determine if it is in normal or autonomous mode. 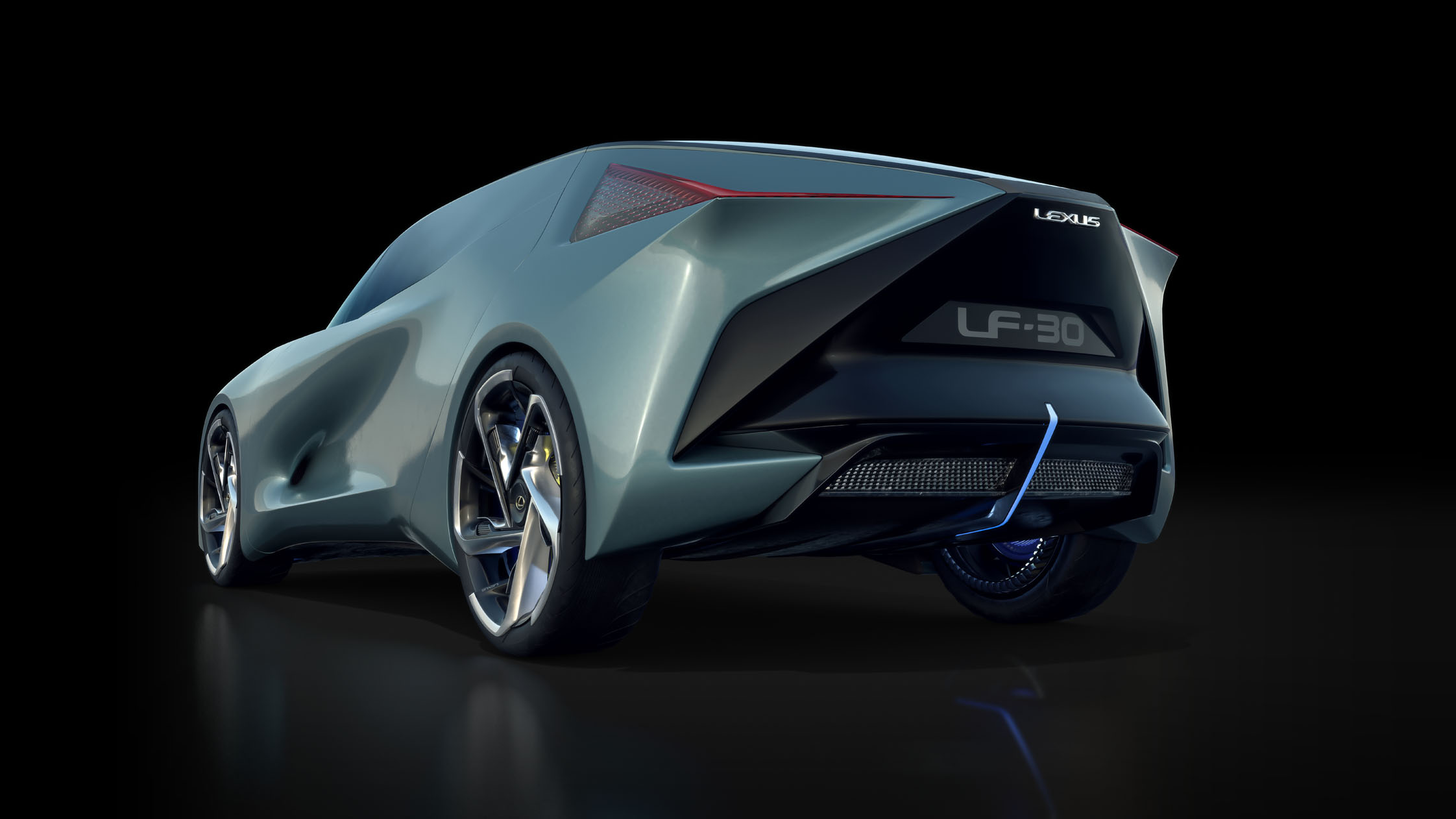