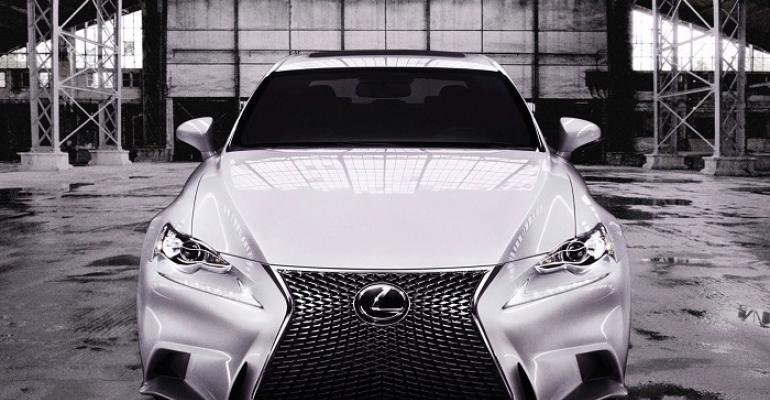 The prominent and controversial nose of the luxury brand&rsquo;s models will evolve as Lexus sees fit, says designer Yasuo Kajino.

Lexus’ relatively new design direction has raised more than a few eyebrows, with critics focusing in on the brand’s now-signature spindle grille.

A quick Google search turns up both gentle condemnation, dubbing the grille “polarizing,” and not-so-gentle disapproval. “Ugly,” “hideous” and similar to the “jaw of a piranha” are just a few of the harsher denunciations.

But those who don’t like it will have to get used to it, says Lexus designer Yasuo Kajino.

“For us, we’re not 100% sure yet how long we’re going to continue the spindle grille,” Kajino, chief designer of the Lexus LF-C2 concept exhibited at November’s Los Angeles auto show, tells WardsAuto in an interview.

Without an expiration date, Kajino says Lexus is looking forward to evolving the look of the car’s nose.

“Spindle is just part of the form of the vehicle, right? So if the basis or the (shape) of the vehicle changes, obviously the form (of the) spindle will change together with the car,” Kajino says.

Evolution of the grille already has occurred per each application on a redesigned Lexus model.

On the GS sedan, which ushered in the design feature in ’13, the hourglass-shaped grille is bisected by a horizontal bar paint-matched to the car’s exterior colors.

On the IS sedan, which was new for ’14, the bar is blacked out. In the IS F Sport grade, the bar is beneath a diagonally-patterned mesh insert.

The LF-C2 has perhaps the most eye-catching rendition of the spindle grille yet, having what Lexus calls a braided mesh that changes in appearance depending on the viewing angle. The lower part of the concept roadster’s grille is extremely tall, emphasizing the low-riding nature of the car.

While the spindle grille is an aggressive look, especially compared with Lexus’ prior, quieter design language, Kajino says the marque must take this path to thrive in a crowded and competitive luxury field.

“In order to succeed in the premium (sector), we can’t just build something the same as the German brands, let’s say. In order to stay, we have to basically be different from other brands,” he says, noting BMW’s and Audi’s respective kidney- and trapezoid-shaped grilles.

While Lexus appreciates those buyers and wants to keep them in the family, “we can’t move forward in the fashion we want (based) just on that buyer group,” Bracken says.

“To not get after a younger buyer group, that would be the bigger mistake.”

The spindle grille appears not to be putting off too many people. Lexus is headed for its best sales in the U.S. in seven years, planning to up its through-November tally of 271,510 units to 305,000 when December results are revealed this week.

The Japanese luxury brand is projected to fall shy, however, of Germany’s BMW and Mercedes-Benz in full-year U.S. sales.