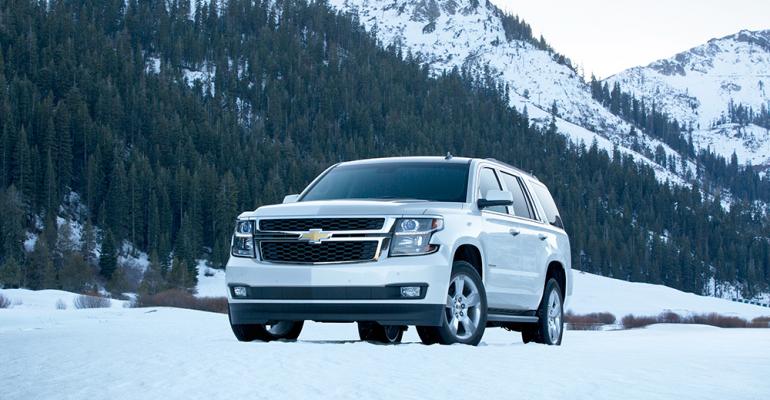 Leading the big-truck surge will be General Motors, which has full availability of its re-engineered Chevrolet Silverado and GMC Sierra fullsize pickups, plus redesigned SUVs now hitting the market.

This could be the last peak year in the history of the U.S. automotive industry for traditional body-on-frame large trucks, based on WardsAuto’s sales outlook.

Furthermore, BOF vehicles in the Large and Large Luxury truck segments will be integral in the final nine months of the year for entire-2014 to reach the 16.2-million U.S. light-vehicle sales forecast by WardsAuto.

The biggest contributor, CUVs, will continue to surge with forecasted sales 12% higher than 2013, taking 27.5% of the market compared with 25.5% last year.

But deliveries of large trucks, despite being up just 1.5% so far, will accelerate during the final nine months of 2014 to help reach the expected industry volume.

WardsAuto forecasts total sales of large pickups, SUVs and vans will rise 7% in the final nine months of 2014 over like-2013 and end the year at 2.6 million units. A slight decline in large BOF truck sales is forecast for 2015, even though the industry is pegged to rise 1% from 2014.

With more stringent emissions standards set for 2016, 2014 likely is the highest volume the U.S. market will ever see again for large BOF trucks.

Leading the BOF-truck surge in the remaining three quarters of this year will be General Motors.

GM now has full availability of its re-engineered Chevrolet Silverado and GMC Sierra fullsize pickups. That, plus some anticipated aggressive marketing, should lift sales of the vehicles from the lethargic results experienced since the end of last year.

However, for the industry, pickups will be the volume leader among BOF trucks.

Large pickups are forecast at 2 million units for 2014, 7% above 2013. A potential limit on pickup sales this year is Ford’s third-quarter changeover at one of the plants building its redesigned ’15-model F-150. The retooling could involve a lengthy production stoppage that hurts dealer inventory.

WardsAuto expects the other three main players in the segment to make up for any Ford sales losses due to inventory shortages.

Besides full availability of the new versions, GM also has ample dealer inventory well above year-ago of its large pickups. Chrysler is pushing Ram pickup volume through its own aggressive retailing, and sales were up 24.4% in the first quarter. The Toyota Tundra also is making a bigger dent with January-March deliveries up 16.2%.

GM’s coming re-entry into the small-pickup segment in the fourth quarter this year with the new Chevrolet Colorado and GMC Canyon also poses a potential check on stronger large-truck sales. The new trucks will be big enough to compete with large pickups, but volumes this year will be small due to their late introduction, and are more likely to be a cannibalizing factor in 2015.

Van sales are being pumped up in 2014 by full-year availability of the Ram ProMaster, introduced in the third quarter last year after Chrysler’s long hiatus from the segment. Ford introduces its all-new Transit van this summer but continues the venerable E-Series models for several years – likely sustaining the segment as consumers get used to an entirely new design from the automaker.

First-quarter deliveries of the Mercedes Sprinter, which underwent a midcycle enhancement last year, surged 21% over like-2013. Also, sales have doubled for the GMC Savana, and the Nissan NV is up 3%.

Demand in the large-van segment is expected to decline over the next few years as smaller, fuel-efficient entries become available.

Although panel body-style versions of minivans have been available for years, Ford sparked growth of small commercial vans with the introduction of the Ford Transit Connect in 2009.

Last year, Nissan entered the segment with the NV200 and this summer will start building a version for GM to be sold as the Chevrolet City Express. Also this summer, Chrysler debuts the all-new Ram ProMaster City. Similar vehicles are expected from other automakers in the future.