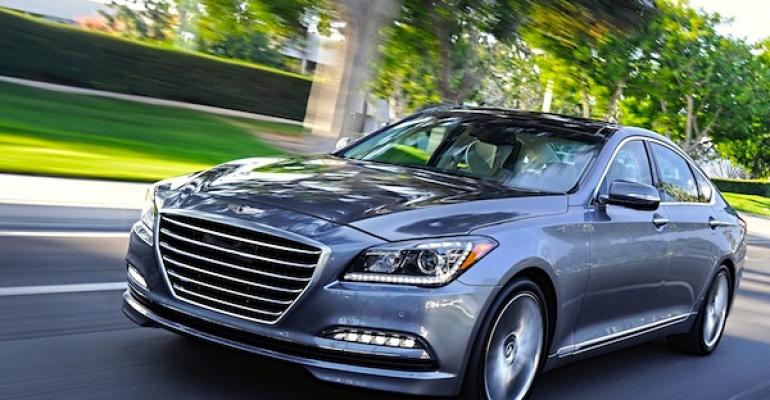 The Golf outsold the Hyundai i30 in Korea last year, marking the first time a foreign-brand model beat any locally built Hyundai. Total import sales surged 25.6% from like-2014.

Hyundai, a heavy hitter among global auto exporters, is reeling from a couple of punches thrown at home.

Volkswagen sold 7,238 units of its Golf hatchback in Korea last year, some 12% better than the 6,444 deliveries of Hyundai’s i30. It was the first time a foreign brand outsold any locally built Hyundai.

The Ulsan-produced i30 hatchback is marketed in the U.S. and Canada as the GT version of the best-selling Elantra. It is marketed as the i30 in Europe, where it is produced at Hyundai’s Nosovice plant in the Czech Republic.

In line with Chung’s demands Hyundai is fighting back, unveiling in late January a revamped, Ulsan-built i30 featuring new styling and better fuel economy than the Golf. Reworked like the new i30 produced at Nosovice and released in October, it sports a new front end, 7-speed transmission and 1.6L VGT engine that puts out 136 hp.

Trying to fight off imports in another segment, Hyundai has been disappointed by the reception given the all-new, Korea-specific Aslan. The highly touted midsize near-luxury sedan was designed to compete against upmarket imports such as the BMW 3-Series, Mercedes C-Class, Audi A4, Lexus ES 350, Ford Taurus, Honda Accord and models from other Korean automakers.

It debuted in May at the Busan Motor Show and was released in October in 3.0L and 3.5L Gdi direct-injection V-6 versions. Taking its name from the Turkish word for lion, Hyundai pitched the sleek Aslan as having both the beauty and poise of the lion, as well as ferocity in pursuing its prey.

The announced sales goal was 22,000 units for 2015 and for 6,000 in the two months it would be on the market in 2014. The Aslan received accolades for its good looks, ride, handling and even price and fuel economy, but its roar didn’t intimidate importers.

The price cut applies to vehicles produced in 2014, but analysts think it probably will stay in force and a production-year differentiation will not be made.

In Korea, sales incentives usually come in the form of giveaway add-ons such as DVD players and via sticker-price discounts that once were unheard of.

Aslan May Be Victim of Narrow Slotting

Some industry-watchers believe the Aslan suffers not only from a formidable field of domestic and foreign competitors, but also from cannibalism from other models within its own Hyundai Group.

The Aslan, touted to slot between the Grandeur (Azera in the U.S. and Canada) and Genesis models, apes the Grandeur in many ways. It has identical measurements, except for an overhang longer by a meager 2 ins. (50 mm). It is shorter than the Genesis overall by just 1.7 ins. (30 mm). Some analysts believe there is not enough differentiation between the Aslan and Grandeur and some potential customers are opting for the better-known Grandeur that sells alongside it.

This was the case with the Korea-specific Hyundai Marcia, essentially a third-generation Sonata with differing front and rear fascia. It was marketed alongside the Sonata from 1995 to 1998, then taken out of production because of poor sales performance.

Other analysts think the imports are the real culprits, as the Grandeur itself also is coming on hard times. Collectively, they say, the imports are dominating the midsize near luxury and luxury segment.

January domestic sales of the Grandeur were down 19.9%, with 6,513 units sold, compared with 8,134 a year earlier. The model has been one of Hyundai’s better-selling models since its 2002 debut but is not scheduled for a makeover for another year or more.

Imports, meanwhile, are gaining momentum in the Korean market.

The Korea Automobile Importers and Distributors Assn. earlier this month released January sales figures that greatly exceeded members’ own projections for 2015. Imports sold a combined 19,930 vehicles, a year-over-year gain of 34.2% and a 16.4% increase over December.

January import sales broke the previous monthly record of 18,112 vehicles and raised foreign automakers’ market share above 15% for the first time. The trade group earlier had made a conservative prediction for 2015, saying it anticipated import sales of 215,000 units, a 10% gain over the prior year.

The importers generally agree their Korean sales this year will be robust, while the market overall is projected to see relatively flat growth, if any.

For example, Kim Hyo-joon, CEO of BMW Korea, says the automaker expects at least a double-digit increase in sales of its core brand. BMW was Korea’s top importer in 2014 with 40,174 deliveries, up 21.5% from prior-year and good for a 20.5% share of the import market.

The importers’ trade group had based its earlier, more conservative prediction on factors including “intensifying competition from Korean brands,” slow growth of the Korean economy and high consumer-debt levels.

Hyundai, however, appears to be downplaying the prospect of stepped-up competition. Its 2015 business plan, released in late January, projects overall global sales will rise just 1.8% over 2014. Korea’s No.1 automaker is calling for a gain of only 0.9% in its home market – and predicts it will barely match its 2014 volumes.

Hyundai May Slot Upscale Sedan Between Azera, Genesis
May 30, 2013