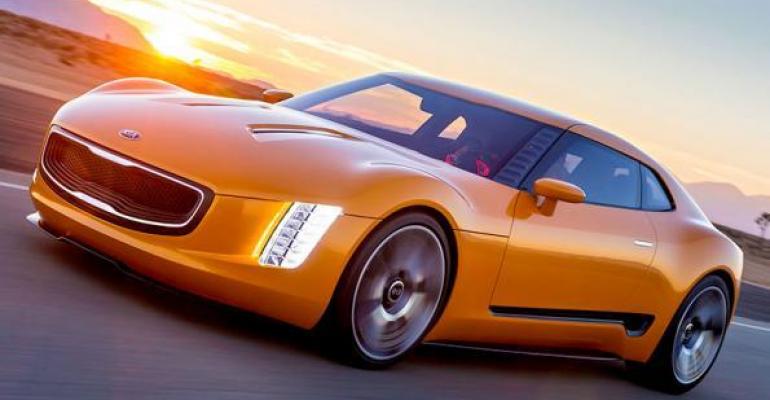 Features of the model include a 2.0L turbocharged and direct-injected 4-cyl. engine making 315 hp, a close-ratio 6-speed manual transmission and Pirelli 20-in. P-Zero tires.

DETROIT – Kia is getting good feedback on the GT4 Stinger rear-wheel-drive concept car, enough so that the brand’s U.S. officials are pushing for production.

Features of the model include a 2.0L turbocharged and direct-injected 4-cyl. engine making 315 hp, a close-ratio 6-speed manual transmission, and Pirelli 20-in. P-Zero tires, wrapped around 20-in. aluminum center-lock wheels with carbon-fiber inserts.

The vehicle has traveled to auto shows around the world, including the Geneva show in March, where it received positive response similar to that given in the U.S., Sprague says.

He doesn’t know exactly how many markets would have to opt to sell it, but says having only a few markets retailing the car wouldn’t necessarily be detrimental to potential production status.

He notes the Sedona minivan is sold only in the U.S. and Korea but was greenlit for production.

A potentially bigger issue holding the GT4 Stinger back is where Kia would build it, Sprague says.

“It just depends on where (headquarters) can find the manufacturing capacity, because it wouldn’t be big volume,” Sprague says of notoriously volume-slim sports cars.

Kia currently is launching its most expensive model yet in the U.S, the K900 luxury sedan.

Sprague says early sales are good, with more than 200 sold last month. The vehicle is rolling out to the Midwest right now, after launching sales in the Western and Southern U.S.

Kia, much like sister-brand Hyundai with its Genesis and Equus models, is targeting a new generation of luxury buyers, who don’t care about brand and status issues as much as their parents.

“If you think of where we were five years, or even two years ago, we’ve (come a long way),” Sprague marvels at all the changes since he began working for the company in 2008.

However, he acknowledges some people still view Kia as just a value brand, remembering early models such as the quality-challenged Sephia.

A big part of Kia’s long-term goals is to erase that image.

Besides the K900, Kia also is launching this year an electric variant of the Soul, the Soul EV, due in the third quarter, as well as a next-generation Sedona minivan.

Sprague says the exit of the Dodge Grand Caravan from the U.S. market should bode well for Kia, whose Sedona, along with the Caravan, was one of the lowest-priced minivans available.

Kia, however, has not released pricing for the new Sedona, due on sale in the fourth quarter, nor will Sprague disclose expected sales volume in light of the Dodge’s departure.