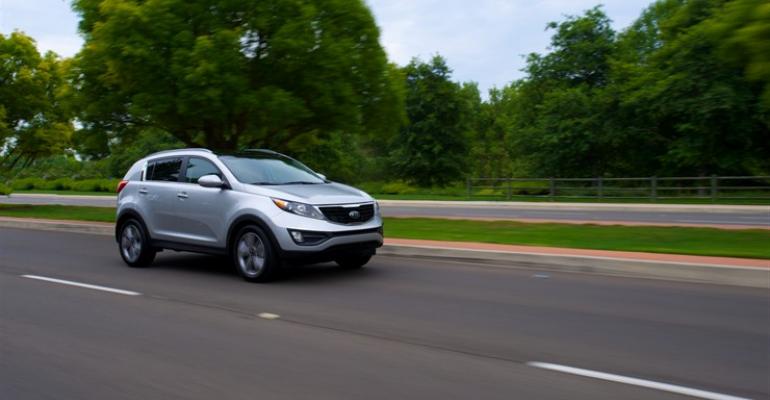 Strikes at Kia&rsquo;s plants in Korea are less severe than those a year ago, and shouldn&rsquo;t impact the brand&rsquo;s U.S. days&rsquo; supply too much, says a top U.S. Kia official. DANA POINT, CA – Kia U.S. sales last year took a hit as the brand was chronically short of key models due to strikes at its Korean plants.

Although walkouts are occurring at some of those same plants, Kia’s U.S. sales and marketing chief doesn’t expect a similar level of disruption to the brand’s product pipeline in the fourth quarter.

“I was just there last week and asked the same question, (and) no, they don’t anticipate we’ll (see an) impact,” Michael Sprague, executive vice president-sales and marketing for Kia Motors America, tells WardsAuto here during a ’15 Sedona and Soul EV media preview.

In some months last year, the gap between Kia’s U.S. days’ supply of cars and the industry’s average days’ supply was as much as 20.

While it has a U.S. plant in West Point, GA, Kia still is highly dependent on Korean manufacturing operations, which build more than half of the nameplates the brand sells in the U.S.

Unionized workers at Kia plants in Korea staged partial strikes during the summer over contract demands. Workers settled for higher wages and a hefty performance bonus a couple weeks ago.

Kia recently announced a new North American plant will open in Mexico in 2016. Despite rumors of it building Kia’s B- and C-cars, Sprague says the final decision rests with Korean management, which is heavily focused on growing Kia’s presence in Central and South America, as well as launching sales in Mexico.

While the brand suffered its first annual sales drop in the U.S. in five years in 2013, falling 4.0% to 535,179 units, Sprague sees Kia’s 2014 sales in the black. However, he and a spokesman are quick to point out the 570,000-unit target that has been bandied about is from Kia headquarters in Korea, not KMA.

Sprague notes that while the August performance was strong, with volume setting a monthly record, demand in September has slowed.

“But it’s September and we traditionally experience this drop-off,” he says. “But December’s always big. We’ve just got to get through September, October and November.”

He’s high on Kia maintaining its momentum in the fourth quarter due to the all-new ’15 Sedona, which has been rebranded a multipurpose vehicle and launches in early October.

“We think Sedona, provided we get (inventory), will give us the boost to finish the year strong,” he says.

He also sees more growth in 2014’s final quarter for the Soul, which continues to astound even him. Sprague did a double-take when reminded 104,777 were sold through August, a 25.9% increase from like-2013.

Also up strongly for Kia in 2014 is the Sportage CUV. Its 37.2% climb is a direct result of more units in stock this year vs. last.

“For us primarily it’s been getting the production, because with the production the dealers have it and are focusing on it, and consumers are coming in and asking for it,” he says, adding Kia has not been marketing the 4-year-old small CUV.

Thanks to healthier inventory, Forte compact-car deliveries also have risen, albeit by just 2.5%.

Down for the brand in 2014 are the Rio subcompact, which Sprague acknowledges is not a focus-product, and the Sorento midsize SUV.

An all-new version of the latter debuts this week at the Paris auto show and, according to WardsAuto forecast data, the ’16 model goes into production for the U.S. in November in West Point, although Sprague is mum on launch timing.

He puts the current, 5-year-old Sorento’s 4.8% decline through August down to age, as well as strong competition from the new Jeep Cherokee and older-but-still-strong Chevrolet Equinox.