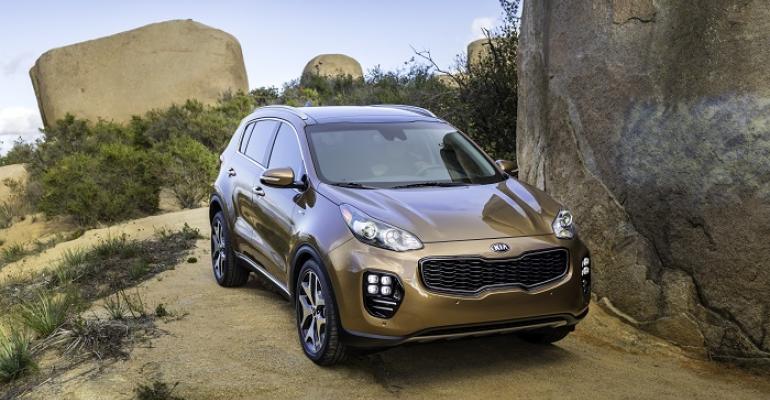 U.S. sales of Kia&rsquo;s compact CUV were up 20.3% through November, in no small part due to production givebacks in markets less robust than the U.S.

That’s because a slowdown in new-vehicle demand in those countries and regions is proving beneficial to Kia’s efforts to sell more Sportage CUVs in the U.S.

“We’ve been constrained in terms of the production that we’ve been able to get here in the United States,” Michael Sprague, chief operating officer-KMA tells WardsAuto in an interview of a longstanding issue of not being able to sell higher volumes of the compact CUV to Americans.

“With other markets this past year giving back production because of the decline in those markets we’ve been able to capture more (of their capacity),” Sprague says of the reason behind the 20.3% jump.

In China, light-vehicle sales rose 2.9% above year-ago through October, although that is a smaller increase than in recent years. The Chinese slowdown took a 15.0% bite out of Kia’s car sales there, but the brand’s light-truck deliveries climbed 3.1%.

The Sportage is built for the U.S. and other markets at Kia’s Gwangju, South Korea, plant. It also is assembled at Kia’s Zilina, Slovakia, plant for Europe.

Sprague sees KMA continuing to grab unused capacity from other regions as the new, fourth-generation Sportage debuts in the U.S. next year.

“We anticipate with the new one coming out we’ll be able to get more production to meet the demand we anticipate this vehicle will have,” he says.

KMA won’t release a sales target for the next-gen CUV.

Since the third-gen Sportage debuted in 2010, Kia has been mostly mid-pack in WardsAuto’s Small CUV segment, one of the industry’s fastest-growing groups.

The nearly 48,000 Sportages delivered through November was shy of the 107,258 Patriots sold by segment leader Jeep, but the vehicle outperformed the newer Chevy Trax and Honda HR-V CUVs in the period.

Size, Pricing a Problem Before

Another problem of the outgoing Sportage has been its smaller size vs. many of the models Kia considers its competitors, such as the Honda CR-V, Toyota RAV4 and Ford Escape.

Those models have grown in size and now live in WardsAuto’s Middle CUV segment, home to Kia’s slightly bigger Sorento model, which Sprague acknowledges used to be too close in size and price to the Sportage.

“With the new Sorento that came out this past January, it got bigger, (and) we’ve done more separation between the two. So now there’s a clearer and distinct (price) walk if you’re coming in for a CUV,” he says.

For instance, five years ago someone considering a Sportage could pay just $10-$20 per month more and get the base LX grade of the previous-gen Sorento “so a lot of people migrated there,” Sprague says.

The new Sportage is slightly longer than the model it replaces, by 1.6 ins. (41.0 mm), but still falls a few inches shy of the CR-V and RAV-4, the No.1- and No.2-selling models in WardsAuto’s Middle CUV group this year.

But the KMA sales chief says the new Sportage feels larger inside.

“I will say…from a visibility standpoint and spaciousness standpoint it feels bigger than the previous one,” he says.

Other updates for the vehicle’s fourth generation include a redesigned front fascia, giving the vehicle what some industry observers have called a Porsche-like appearance, and retuned 2.0L turbocharged and 2.4L naturally aspirated engines.

Despite Kia’s plans to shift production of its C-platform Forte car for the U.S. from South Korea to a new vehicle-assembly plant near Monterrey, Mexico, Sprague says production of the Forte-based Sportage will remain in South Korea.

The 300,000-annual-capacity Monterrey plant is undergoing pre-production builds, with salable units set to roll off the line beginning in May.