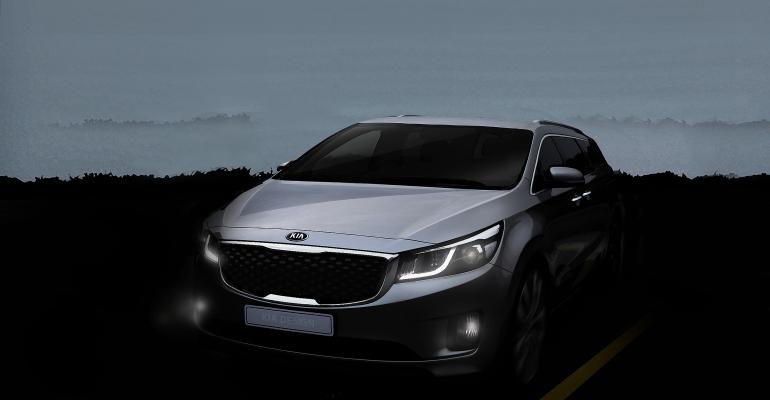 The U.S. sales and marketing arm of the Korean automaker says it may be possible to return to the volumes it enjoyed with the minivan a decade ago.

DANA POINT, CA – The Kia Sedona once sold as many as 61,149 units in one year in the U.S. Of course, the minivan segment once racked up a million units annually.

But Kia doesn't see the contraction in industry sales of the family haulers as holding it back from achieving that same volume level again with the new ’15 Sedona, on sale in the U.S. in early October.

“Will we ever get back to the 60,000? People said we'd never get to 500,000 (total U.S. sales),” Michael Sprague, executive vice president-sales and marketing for Kia Motors America, tells WardsAuto here in an interview. “Internally, when we introduced the Soul (compact car) we said probably (we’ll sell) 50,000. Last year it was 112,000. You never know.”

Driving Kia's optimism is the move toward a more CUV-like appearance for the vehicle, reflecting Americans’ increasing preference for CUVs, not minivans.

“This is a going to be a compelling game-changer vehicle in the category,” says Orth Hedrick, KMA vice president-product planning, citing its CUV look as unlike “anything we've ever seen before.”

The Sedona, last fully redesigned in ’06, is longer and with a wider stance than its predecessor. The vehicle also offers more technology than before and unique seating arrangements not found among the competition.

“There's nothing ‘mini’ about this vehicle,” Sprague says, referring to Kia's move away from labeling the Sedona a minivan.

Sprague says Kia's decision to call the Sedona a multipurpose vehicle reflects both its content and the desire to use the same descriptor as Kia places on the vehicle in markets outside the U.S.

But he says, unlike some competitors present and past, Kia isn't going to promote the Sedona as the “anti-minivan.”

“All we're trying to do is give people a sense that, this is a different vehicle than what they've known the Sedona to be. The sliding doors? We get it, it will always signify a minivan. But there's so much more to this vehicle than just the sliding doors.”

In 8-passenger models, second-row seats are dubbed “Slide-n-Stow,” as the bottom cushion folds upright and the seat moves forward to create more cargo room and easier entry and exit for the third row.

In 7-passenger “lounge” versions of the Sedona, second-row seats recline, have retractable lower leg rests and slide not only fore and aft but also side to side.

Kia will offer the Sedona in five trim levels, ranging from a base price of $25,900 for the L grade to $39,700 for the SXL line, which has lounge seating standard.

Sprague does see some crossover between buyers of Kia's midsize Sorento CUV and the Sedona, but believes purchase decisions will be based both on love or hate of sliding doors, and how many children are in a family.

“If it’s a family with two children vs. three then you kind of have to go into a minivan to get (easier access) into the third row,” he says.

True to the typical profile of a minivan buyer, Kia expects the Sedona MPV to attract both young families and older empty-nesters, as 45% of minivan buyers don't have children living at home, he says.