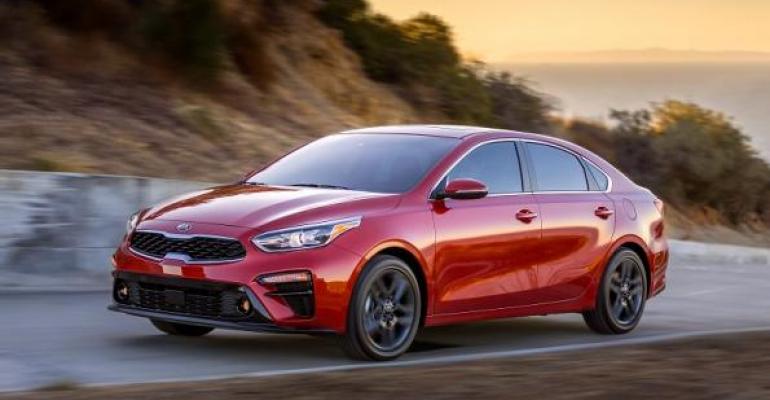 &quot;I&nbsp;think for a lot of folks going all the way down to an HR-V or a&nbsp;Trax&nbsp;or Soul&nbsp;doesn&rsquo;t work for them,&rdquo; Kia&#39;s chief U.S. product planner says of why C-cars will endure.

Kia was one of the few brands that saw a U.S. increase in compact-car sales last year.

That achievement is giving the Korean brand a lot of faith as it prepares to launch the next generation of its Forte C-car this year.

In WardsAuto’s Upper Small segment, where most volume, non-niche C-cars live, sales tallied 2.02 million units in 2017. The group fell 2.2% from 2016, but Kia’s outgoing Forte bucked the downward trend, although it’s unclear if it was retail demand or fleet sales leading the charge.

Forte sales rose 13.8% to 117,596, making it the brand’s best-selling model in the U.S. in 2017. In the 21-nameplate Upper Small segment, only the Forte, Honda Civic, Nissan Sentra, Subaru Impreza and Volkswagen Golf were in the black last year.

“One thing we always remind (people of is), when you want to move to a CUV there’s a premium involved,” Hedrick says of the American infatuation with utility vehicles. “To get the same price point (of a compact car) you have to (buy a small CUV), and I think for a lot of folks going all the way down to an HR-V or a Trax or Soul doesn’t work for them,” he says of Honda, Chevy and Kia’s respective small CUVs.

He cites the advantages the new Forte has over a small CUV as a large trunk, roomy backseat and good fuel economy.

Forte fuel economy is estimated to grow 3 mpg (1.3 L/100 km) from the outgoing generation, helped by a newly designed CVT Kia refers to as an intelligent variable transmission. The IVT has a chain-type belt instead of push belt for a promised smoother, step-shift-like acceleration during wide-open throttle.

The new compact car also has some design cues from Kia’s Stinger sport-luxury sedan, which has been earning high marks from reviewers and was a finalist for 2018 North American Car of the Year.

“What that car embodies, that kind of youthful spirit, that kind of vibrancy, going forward will probably be more and more incorporated in our cars,” Hedrick says, noting there is “a touch of it” in the new Forte. Specifically, Kia has cited the C-car’s long hood, short deck, headlamp design and headlamp layout as Stinger-esque.

While Kia calls the Stinger an “inflection point” for the brand in terms of its direction and how people view it, he says Kia doesn’t plan to do variants of the Stinger (one concept of it was the GT4 Stinger sports car) or create a Stinger sub-brand.

“If it takes off, we prefer to keep the focus on the Kia brand,” Hedrick says. “That was one of the points in making sure that we feature the Kia logo loud and proud (on the car).”

However, Kia reportedly is considering a performance sub-brand similar to sister-brand Hyundai’s N.

He won’t comment on the possibility the Stinger will influence the next generation of Kia’s large luxury sedan, the K900. WardsAuto earlier reported a new K900 is to be unveiled late next month at the 2018 New York auto show.

Two things Kia won’t be aping Hyundai on are an A-segment CUV and a pickup.

Hyundai has announced an A-CUV is coming, to give buyers leaving subcompact cars a similarly priced utility vehicle.

Despite Kia being a Hyundai-owned brand, a Kia U.S. spokesman says he knows nothing about it and Kia won’t have a similar offering in the U.S.

“I don’t think we see an opportunity there,” Hedrick says of a smaller-than-subcompact CUV. “We have a lot of coverage in the marketplace now, and that is not a priority at this point. I think we would see more opportunity in C-segment (CUVs) then we would in A- or B-(segment models).”

As for getting into the pickup segment, which Hyundai is doing with its small Santa Cruz, he says Kia has higher priorities.

“It’s a big step to take and I think it’s a major commitment,” he says. Hedrick, a former product planner at Nissan, points out how difficult a time Nissan and Toyota have had in making a dent in the Detroit Three stronghold of large pickups noting, “It’s a fierce battle. You have to go into it eyes wide open.”

Meanwhile, when asked why Kia continues to field models in three segments other brands are exiting – subcompact car, minivan and large car – he says those vehicles make sense for Kia in the U.S. as they are key parts of the brand’s global portfolio.

Of minivans, Hedrick says there are buyers, largely Baby Boomers, who prefer the vehicle type and its unique features, such as sliding rear doors, to what CUVs offer.

As for the Cadenza, “There’s spots in the market that still want a big easy-driving, front-drive sedan, or easy-riding (sedan),” he says. “That architecture of being upright and having a larger backseat appeals to a segment of the buyers we still want to serve.”

Kia: Announcement on Telluride Due as Sportage, Sorento Decline
Jan 24, 2018