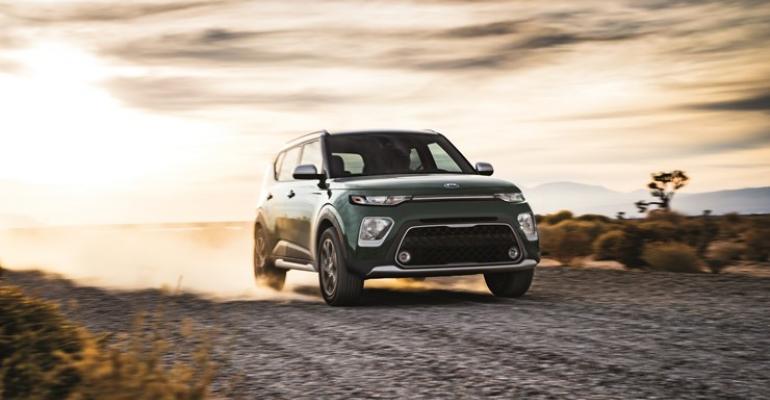 Small CUVs with all-wheel drive tend to sell better than those that don’t have the feature, judging by the success of the Jeep Compass and Subaru Crosstrek.

NEW YORK – Absent an entry today, Kia is looking to get into the small all-wheel-drive utility segment in the U.S.

Such a model is “in our product strategy for the future,” Michael Cole, chief operating officer-Kia Motors America, tells Wards here in a recent interview.

Today, Kia has the boxy Soul that straddles the line between being a car and a utility vehicle (Wards places the Soul in the Lower Small segment, also the home of Kia’s Rio subcompact car), but there is no all-wheel-drive variant of the Soul.

The new third-generation Soul, which just went on sale in the U.S., rides on Hyundai-Kia’s B-C platform as does sister-brand Hyundai’s new compact Kona CUV, so speculation has brewed Kia may introduce an AWD variant of the Soul as the Kona offers AWD.

Also possible is Kia bringing its Stonic CUV to the U.S. The vehicle, available overseas for two years, also shares a platform with the Kona and has a more traditional utility-vehicle appearance.

For now, Cole says the Soul works well for Kia “because it plays the part of sort of getting into that (small) SUV (sector), and also we can compete in some of the markets as a (car)…it fits in both. It does that job for us.”

With the redesigned ’20 Soul, Kia is offering a variety of grades to appease a wide swath of buyers, including an X-Line grade promoting the “ruggedness of a crossover, off-road-styled Soul,” says Cole.

A fair number of entrants in Wards Small CUV segment have AWD, and those that do tend to sell better than those that don’t.

The No.1 and No.2 best-selling models in the segment last year have AWD.

The Subaru Crosstrek, a model with AWD standard, placed second with 144,384 deliveries, up slightly from 2017.

Hyundai’s Tucson, also offering AWD, was third in sales in the Small CUV segment in 2018 with 142,299 deliveries.

However, having AWD is not a guarantee of success. The Mazda CX-3 has it but racked up just 16,899 sales in 2018. The Nissan Juke also had AWD, but was one of the lowest-selling models in the group for years, causing Nissan to pull the plug on the Juke in the U.S. last year.

Nissan’s replacement for the Juke in the U.S., the Kicks, doesn’t have AWD, but nevertheless tallied 23,312 sales last year, more than the CX-3.