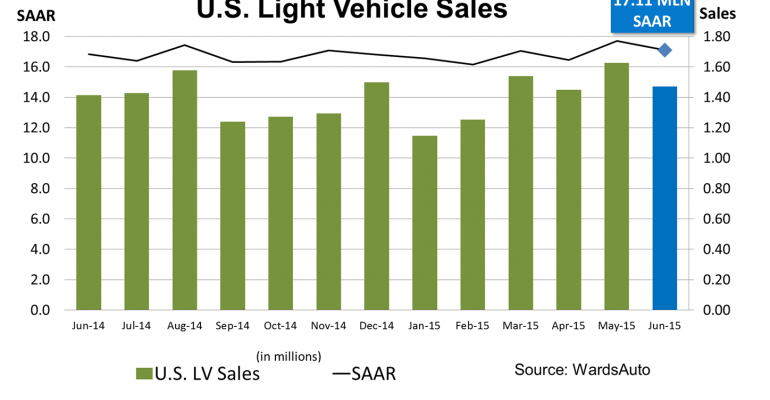 June&rsquo;s car penetration fell to 44.9%, as all segment groups posted year-over-year declines in the same month for the first time since September 2009.

However, May-June marked the first time since June-July 2005 monthly SAARs topped 17 million units in consecutive months. Furthermore, June’s actual volume of 1.47 million units was higher than year-ago’s 1.42 million and lifted first-half sales to a 10-year-high of 8.49 million, 4.4% above year-ago.

The year-to-date SAAR of 16.9 million units, including the second-quarter total of 17.1 million, were both 10-year highs. Year-ago’s first-half SAAR was 16.1 million.

Initial estimates from TrueCar in June indicated automaker incentive spending generally was not a factor one way or another.

Possibly limiting June’s volume slightly were fleet deliveries. Based on data from third-party sources, after posting year-over-year increases in the first four months of 2015, initial estimates showed a year-over-year decline for the second straight month in June.

June’s lower DSR can be traced mostly to cars falling 7.5% from year-ago, the biggest decline since January 2014. Except for 2005, when sky-high market incentives skewed truck sales upward, car penetration of 44.9% was the lowest ever for June, as all segment groups posted year-over-year declines in the same month for the first time since September 2009.

First-half truck penetration of 54.7% was the highest for the first six months in any year.

CUVs led the market with sales up 12.8% year-over-year, and penetration reached a June record 29.1%. CUV share in first-half 2015 was 28.7%, highest ever for the period and is forecast to continue rising in the remainder of the year.

At the same time, large trucks, due to a decline in SUVs and a relatively flat comparison for pickups, showed some weakness for the second-straight month. After rising from the same year-ago period in six straight months, and 23 of the past 28 through April, the LV share of large trucks, including luxury segments, declined in May and June, and last month’s volume fell year-over-year for the first time since a bad-weather-induced shortfall in February 2014.

The big-truck weakness coincides with slight upticks in gasoline prices over the past two months, but prices remain 23% below year-ago and diesel actually fell slightly in June from May, based on data from the U.S. Energy Information Admin. Weakness in large trucks appears due more to Ford lacking inventory for its new F-150, and sales of some relatively fresh products peaking for several brands.

June’s strength mostly was rooted in demand for small and midsize CUVs and SUVs. Combined sales of Middle CUVs and SUVs were up 7.0%, with market share increasing to 21.1% from same-month 2014’s 19.7%. Likewise, total sales of Small CUVs and SUVs increased 44.2% over year-ago, and share jumped to 5.6% from 3.9%.