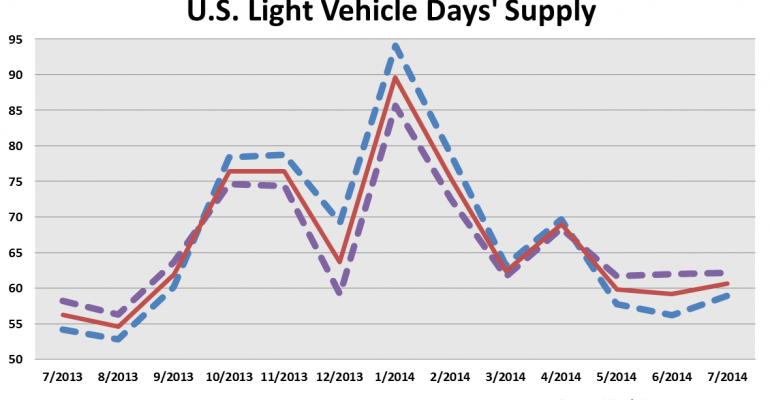 Some of the inventory buildup is attributable to Ford stockpiling F-150 large pickups as it begins retooling in August for the new aluminized versions.

U.S. light-vehicle inventory hit a 10-year high in July even as sales continued to surge and NOW are forecast to end the year at 16.3 million, compared with the 16.2 million previously expected by WardsAuto.

Domestic production for the U.S. market is giving no signs of letting up even though inventory arguably has been above levels necessary to meet demand for the entire year. That could mean automakers expect demand to continue an upward trend from the 16.3 million-unit seasonally adjusted annual rate it has tracked at through July.

If demand matches current inventory and planned output for the rest of the year, final 2014 U.S. sales will finish at 16.4 million. But WardsAuto is anticipating a minor respite during Q4 from the current sales surge after automakers clear out most of their ’14-model inventory, limiting final 2014 deliveries to 16.3 million.

Some of the buildup is attributable to manufacturers prepping for future lost output due to planned tooling shutdowns in advance of new products. Also, increased local sourcing of some products explains a portion of the buildup.

LV inventory ended July at 3.33 million units, 12.9% above the same year-ago month and 4.5% below June’s 3.49 million. Although inventory dropped from the prior month, it usually falls by a near double-digit. The total was the highest for July since 3.63 million in 2004.

LV days’ supply, which nearly always declines from June, increased to 61 from prior-month’s 59. July’s days’ supply was well above year-ago’s 56, which is a more optimal total for this time of year.

Inventory of locally produced vehicles was behind July’s robust total.

Domestic inventory totaled 2.74 million units, also a 10-year high. Import stocks, at 591,000, were down 5.8% from year-ago and July was the second straight month overseas-built inventory ended below the same-period year-ago after canning 26 months of year-over-year gains. Many of those comparisons soared well into the high double digits.

In most cases, the strong inventory is justified.

Some of the domestic inventory buildup comes from Ford stockpiling F-150 large pickups. The first of two plants building them begins a weeks-long shutdown at the end of August to retool for the new aluminized versions, and the second plant begins changeover in late November.

Inventory of Ford’s F-Series trucks, including F-SuperDuty, is some 80,000 units above year-ago.

Depending on how much dealers push F-150s on consumers during the plant retoolings, there is enough inventory to carry it into December before deliveries significantly decline. First-quarter 2015 is the period when lack of inventory will affect F-150 sales the most.

However, less F-Series, inventory of large pickups is running 33% ahead of year-ago, with Ram pickups up 40%, Chevrolet Silverado up 33%, GMC Sierra up 24% and Toyota Tundra up 28%. There will be enough large-pickup inventory to make up for F-150 losses, and the segment is not expected to become a drag on industry sales, at least for the remainder of this year.

Additionally, GM begins production this month of the new Chevrolet Colorado and GMC Canyon. Although they are considered small pickups in the U.S., their volume should help fill some inventory gaps.

To a much smaller extent, inventory of Chevrolet Malibu and Impala are being stockpiled by GM because of a production slowdown planned at the Hamtramck, MI, plant beginning in the third quarter and running into the fourth quarter.

Malibu is not the only middle-segment car with hefty inventory. Despite a rare sales increase in July, year-to-date deliveries of the Lower Middle car segment are down 1.8% from year-ago, and to-date 2014 market share has dropped to 15.2% from 16.3%. But strong production levels have left inventory of the segment 22.5% above year-ago.

Even though August tends to be a stronger month than July for delivery of Lower Middle cars, the segment’s inventory points to heavier discounting compared with others.

Stiffer competition from redesigned versions of the Chrysler 200, Hyundai Sonata and Subaru Legacy could pressure Lower Middle competitors into some creative marketing. The Ford Fusion, Honda Accord, Kia Optima and Mazda6 are well-stocked above year-ago levels. Plus, after August demand for midsize cars fades as demand shifts more to trucks and luxury sedans.