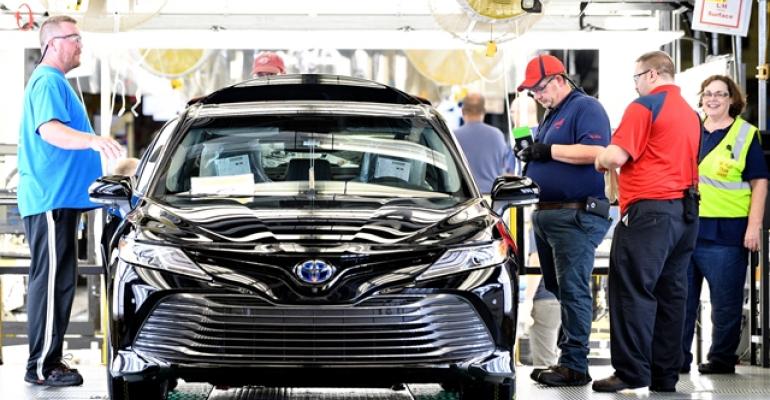 Job One for ’18 Camry at Toyota’s Retooled Georgetown Plant

To build the new Camry, Toyota has added more than 700 jobs at the plant, bringing total employment to more than 8,000, an all-time high for the facility.

GEORGETOWN, KY – Toyota launches Job One production of its revamped Camry midsize sedan, putting the bow on a $1.33 billion makeover at its 31-year-old plant here.

The ’18 Camry is all-new and the first model to be built in U.S. on the new TNGA (Toyota New Global Architecture) platform that promises greater efficiency and lower costs. Georgetown is Toyota’s largest manufacturing plant in the world, with capacity to build 550,000 vehicles and 600,000 engines annually.

The new investment here covers retooling for the TNGA platform, as well as a number of other improvements designed to modernize and streamline the production process, the automaker says.

To build the new Camry, Toyota has added more than 700 jobs at the plant, bringing total employment to more than 8,000, an all-time high for the facility. Since its launch in 1985, Georgetown has built more than 11 million vehicles, including over 8 million Camrys.

Last year the plant produced more than 500,000 vehicles, including Avalon fullsize cars and Lexus ES 350 luxury sedans that are built alongside the Camry.

“The launch of the next-generation Camry is important for Toyota in America and expands the company’s footprint and commitment to Kentucky,” Toyota Motor Mfg. Kentucky President Will James says in a statement released ahead of the line-off ceremony.

The ’18 Camry is totally redesigned inside and out, offers a new 8-speed automatic transmission, new 2.5L 4-cyl. engine and revamped V-6 and hybrid powertrains. It goes on sale in the U.S. in July.

Although the U.S. midsize sedan market has declined as consumers have gravitated toward CUVs, Toyota officials expect the new model to at least stem the slide, if not bolster the segment slightly.

The automaker is planning its largest marketing campaign ever for the Camry, with a series of unique TV spots to roll out in September.