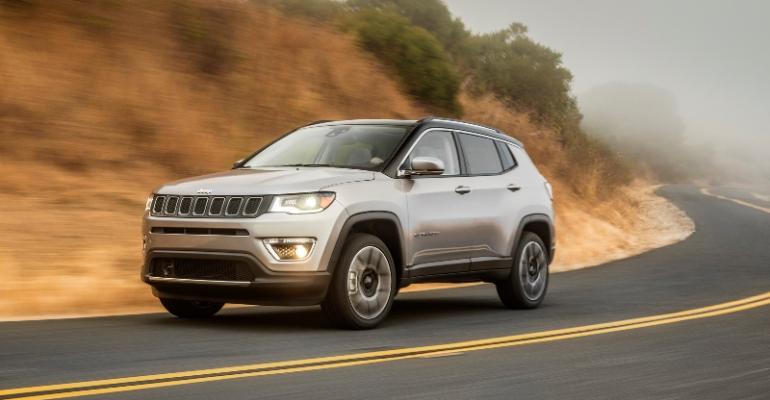 FCA&rsquo;s all-new small CUV, the Jeep Compass, posts huge sales in its first month on the market in South America. The Compass/Patriot replacement goes on sale in the U.S. in first-quarter 2017.

Jeep’s all-new Compass is surpassing expectations during its first month on the market in Brazil, boding well for the small CUV’s global success ahead of its planned North American launch this spring.

“Jeep Compass ‘runs over’ the other SUVs,” blares a headline in the Brazilian publication Motor Show, reporting the Compass “launches with robust sales right at the first month and showcases that it won’t be a secondary player in the market.”

The Compass officially rolled out Nov. 5 in Brazil and has surpassed industry expectations, FCA officials say.

“The all-new Jeep Compass is receiving great reviews from media around the world and, in its first month of sales, it has already become the segment leader in Brazil,” says Mike Manley, head of Jeep Brand-FCA Global.

“We are extremely pleased with these initial results and look forward to the Jeep Compass launch not only in the U.S., but also in other major automotive markets around the world.”

The Brazilian publication Journal of the Car lists the Compass in first place in sales among what it categorizes as mid-SUVs, well ahead of the Hyundai ix35/Tucson, Kia Sportage, Audi Q3 and BMW X1

“In November, we sold 2,537 Jeep Compasses, almost five times more than the closest competitor in the segment,” says U.S.-based FCA spokesman Ariel Gavilan. “With the sales performance of Jeep Renegade and now Compass, the Jeep brand sold over 50,000 units in 2016 (to date) and leads the SUV segment for the third consecutive month (in Brazil).”

Another ranking compiled by the National Federation of Automotive Distributors (Fenabrave) puts the Compass in fourth place among SUVS and CUVs, behind the Honda HR-V, Jeep Renegade and Renault Duster, but a notch ahead of the Ford EcoSport and well ahead of the Hyundai ix35/Tucson. The Fenabrave SUV segment closely mirrors the WardsAuto small-CUV segment.

The Compass and Renegade both are produced at FCA’s Goiana assembly plant in Pernambuco, Brazil. North American production is ramping up at FCA’s plant in Toluca, Mexico, with U.S. sales beginning in first-quarter 2017.

The ’17 Compass replaces the long-lived Compass and Patriot small-CUV pair that end production at Belvidere, IL, this month. The U.S. model debuted last month at the Los Angeles auto show. The vehicle simultaneously was on display at auto shows in Sao Paolo, Brazil, and Guangzhou, China.

Gavilan declines comment on whether the CUV’s strong start in Brazil might signal a need to bump up sales projections for the U.S. market, where the new vehicle enters the exceptionally hot small-CUV segment.

The U.S. model will feature a 2.4L Tigershark MultiAir2 4-cyl. engine as its sole powerplant. FCA says ultimately the Compass will be sold in more than 100 countries with some 17 powertrain variants.