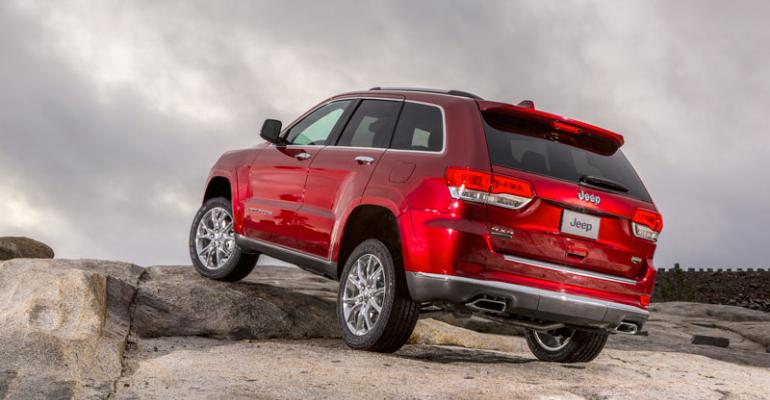 Looking for firm footing among premium-SUV buyers, the Jeep flagship gets a heavy dose of technology upgrades.

Jeep-brand President and CEO Mike Manley tells reporters at an earlier backgrounder for the SUV the upgrades will increase the Grand Cherokee’s share of the SUV market. ”It’s the segment that can really help your premium position as a brand,” he says.

This year will bring a wave of new Jeep products, most of which are bowing here. Alongside the Grand Cherokee are refreshes in Jeep’s C-segment entries, the Compass and Patriot, a revised SRT Grand Cherokee and a forthcoming, unnamed D-segment SUV being revealed later this year.

All Grand Cherokee powertrains have ZF’s 8-speed transmission, which Chrysler began moving across its rear-drive models last year. Jeep adds paddle shifters to the Grand Cherokee and says a lower crawl ratio of 44:1:1 helps keep its status as a trail-rated SUV.

Exterior finishes also are upgraded, with a brightened grill, enhanced fog lamps and frosted taillamps. A backup camera comes with the SUV for the first time, and the trailer hitch is hidden from view.

“It’s still a Grand Cherokee in face and presentation, but there’s a much more refined look to it,” says Mark Allen, head of Jeep design.

“Mid-cycle actions, they can go sideways if not executed right. This looks very cohesive and very tied together,” he adds.

Uconnect, Chrysler’s infotainment suite, is upgraded, with new voice commands for navigation and searches for points of interest through Bing, the Microsoft-owned search engine.

Inside, top-trim Grand Cherokees have an option of copper accents.

Jeep’s Patriot and Compass receive similar exterior and interior treatments, with careful attention paid to the interior. Designers promise softer appointments, such as a cushier arm rest, and satin chrome accents added to the higher-cost Compass.

Gone from the Patriot and Compass are their continuously variable transmissions. Engineers here cited a rise in customers’ complaints about disappointing initial throttle response and replaced the CVT with a 6-speed automatic.

The ’14 SRT Grand Cherokee gets some refreshes that lend more credence to Chrysler’s high-performance division. It is the first vehicle with an SRT-badged steering wheel. It also gets the ZF 8-speed transmission, paddle shifters and exterior refinements.

SRT President and CEO Ralph Gilles notes the SRT Grand Cherokee is winning over Porsche Cayenne and BMW X5 converts and is the best-selling of all SRT vehicles.

“The last generation was more of a hot rod. This is a very sophisticated machine. I’m getting CEOs, I’m getting people literally double in income that (are) buying this vehicle now.”

Manley says all Jeeps, as well as more products across the Chrysler stable in the future, will get an improved Eco mode that shuts off cylinders for fuel-conscious drivers.

The Jeep brand posted a global sales record last year with 701,626 units, up from 675,494 in 1999. It’s a goal Manley had been looking to reach since Chrysler emerged from bankruptcy in 2009, and was surprised it happened considering a lack of new product last year.

“It really has been an incredible story for the brand,” he says.