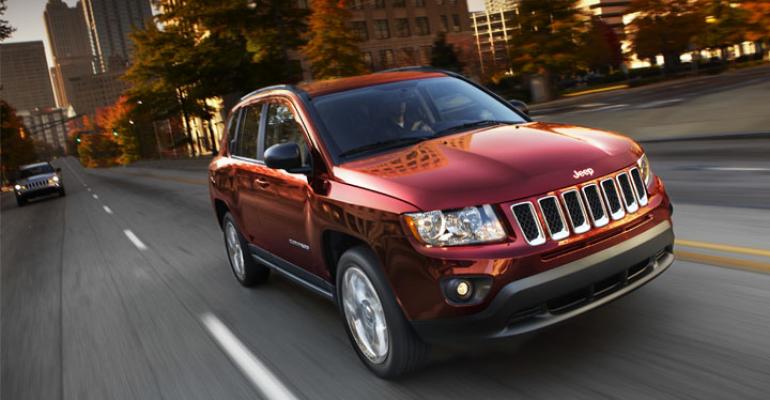 The Jeep Compass &ldquo;did not demonstrate itself as a strong contender on safety in comparison to other tested competitors&rdquo; in the compact-SUV category, Euro NCAP says.

The recently refreshed Jeep Compass earns only two stars from the Euro New Car Assessment Program, with the organization saying the grade reflects a lack of progress in safety-feature upgrades.

Euro NCAP says the Compass was an underachiever in most areas of the compact SUV’s assessment under 2012 ratings.

Since revamping its ratings system in 2009, the European safety organization has upped the ante in safety by annually raising its criteria for the top grade of five stars.

This year, any vehicle awarded five stars should achieve an overall score of at least 80% while garnering at least 80% of the available points in adult protection, 75% in child protection, 60% in pedestrian protection and 60% in safety assist.

Euro NCAP says this has translated into significantly safer vehicles for today’s consumers, especially in pedestrian protection – where the average 5-star car barely exceeded the 25% mark just a few years back.

“Compact SUVs are the most popular SUV segment in Europe, but the Jeep Compass did not demonstrate itself as strong contender on safety in comparison to other tested competitors in the same category.”

By contrast, the new Honda Civic wins the maximum 5-star rating. The ninth-generation hatchback achieves high scores in all areas of assessment, putting it on a par with its rivals in a competitive market segment.

Euro NCAP Secretary General Michiel van Ratingen says the latest results show clearly that a 5-star rating these days means much more than it did some years ago. “Many car makers have moved on, and so have we,” he says in a statement.

“Cars based on older technology, brushed up and marketed as new are not providing the same levels as safety as the newest models developed against the new targets. Consumers interested in a fair comparison will not be fooled by these results.”