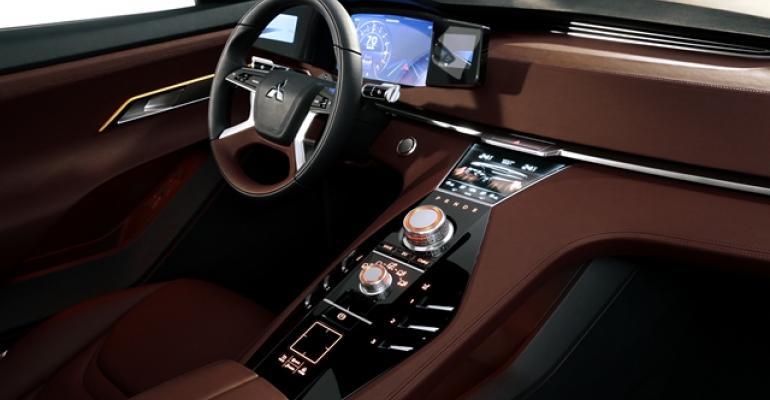 <p><strong>Interior of Mitsubishi&rsquo;s GT-PHEV concept, said to foreshadow next-gen Outlander due by end of the decade.</strong></p>
Industry News

It’s a Fighter’s Chance for Mitsubishi in U.S.

With a better-focused business plan and potential help on the way from Nissan, the automaker believes it can carve out ground in the hotly contested American market.

DETROIT – You don’t survive a century in the auto industry without having a little fight in you.

That’s true of Mitsubishi Motors, which, believe it or not, turns 100 this year and appears determined to battle back from near oblivion in the U.S.

Last year, the automaker sold 96,267 vehicles here, good for a paltry 0.6% share that left it near the bottom of the pack among “volume” brands in the market.

But there’s a bright side to that figure: Sales were up 1.0% from 2015 levels, marking the fourth straight year of volume gains for the marque, even as rental-fleet reliance remained in check.

Further momentum could come from a recent tie-up with Nissan, which acquired a controlling 34% stake in Mitsubishi in October. The two now are working to find cost-saving synergies and engineer a product-development strategy designed to give Mitsubishi more firepower for its dealer showrooms.

Mitsubishi has been clawing its way back from the depths of 2009, when U.S. sales bottomed out at 53,986 units, according to WardsAuto data.

This year is likely to see the automaker in a holding pattern as it gets ready to make a bigger product push in 2018 and beyond. Leading the charge in Mitsubishi’s comeback have been its two CUVs, the Outlander and smaller Outlander Sport, which will be freshened for the ʼ18 model year and joined next year by a third CUV slotted between the two in size and price.

The refreshed Outlander and Outlander Sport will incorporate Mitsubishi’s new design philosophy, dubbed Dynamic Shield and featuring bold front and rear treatments and sharp creases throughout. It is a cornerstone of the automaker’s business strategy that is centered on wooing customers with edgy styling, dynamic all-wheel-drive technology and value for the money.

“There will be more features and lower prices,” Don Swearingen, executive vice president and chief operating officer-Mitsubishi Motors North America, says of the revised models, which will be joined midyear by the long-overdue plug-in hybrid version of the Outlander that already is sold in other markets.

But the bigger news will be the new CUV that will squeeze into the middle of the lineup. Set for reveal at the Geneva auto show in March, the new model will be powered by a turbocharged engine and come stocked with technology and safety features, including a head-up display.

“This will be the best vehicle Mitsubishi has ever produced,” Swearingen tells media here at a business backgrounder just days ahead of the North American International Auto Show, where the automaker will not be exhibiting.

The product push will be capped by entirely new-generation versions of the Outlander Sport and Outlander that are due by 2020. They will get smaller and bigger, respectively, to better distinguish them from the new midsize model.

“The focus now and in the future will be on the CUV market,” Swearingen says, noting the sector already accounts for 65% of Mitsubishi’s U.S. sales. “To grow, we need to grow in that CUV segment.”

The new-product moves are firmly under way without requiring any platform-sharing with Nissan, Swearingen says, adding that near-term the two will search for cost savings in less-visible areas such as transportation logistics and parts consolidation. Longer-term he expects Mitsubishi to contribute its PHEV technology to the group and Nissan to make its Leaf electric-vehicle technology available in return.

Small cars could be another area of collaboration. Although executives admit to being surprised by the success of the Thailand-built Mirage small car here (sales up 3.3% in 2016), going solo on development of future C-sized cars for the U.S. likely would be cost-prohibitive, particularly given the declining demand in the segment. While the Mirage is expected to hang around, the Lancer will be dropped from the lineup around August.

It’s too early in the relationship for the two automakers to have firmed up product plans on small cars or anything else, Swearingen says. But he promises that even if Nissan and Mitsubishi share architectures, the two companies will continue to compete against each other in the market.

“We’ve talked to Nissan, (but the direction) is unclear,” he says, emphasizing, “Mitsubishis will have a distinct look even if we share platforms.”

Volume expectations remain modest. At its peak in 2002, Mitsubishi sold 345,111 vehicles in the U.S. But it was all-but giving cars away with huge rebates and questionable financing deals that ultimately sent the automaker into a financial spiral that threatened its viability in the U.S.

Swearingen says in the current fiscal year ending March 31, Mitsubishi sales will top 100,000 units, a milestone worth noting as it tries to work its way back to U.S.-market relevance. And he doesn’t shy away from predicting a return to the heyday levels of 300,000 vehicles a year.

To get there may require tweaks to Mitsubishi’s U.S. retail network, though Swearingen doesn’t envision any big increase in numbers from the current 360 outlets, concentrated mostly along the coasts and in the South.

“We want to add dealers, but strategically,” he says, noting throughput and profitability at the brand’s retailers are at their highest levels since the early 2000s, though he declines to specify how many dealers are operating in the black.

“To be successful, we need a strong dealer body,” he adds.

No.1 on the Mitsubishi U.S. product wish list? A pickup truck. The automaker produces a small pickup in Asia, but a 25% tariff in the U.S. makes importing it prohibitive.

“Dealers want it, but clearly there are obstacles,” Swearingen says.

While a pickup is iffy, the U.S. executive appears far more confident in Mitsubishi’s overall direction and its chances of success.

“The plans are in place to strategically grow, not only in North America but globally,” he says.

Anatomy of Restructuring: Did Nissan Pick a Winner in Mitsubishi?
Jul 20, 2016