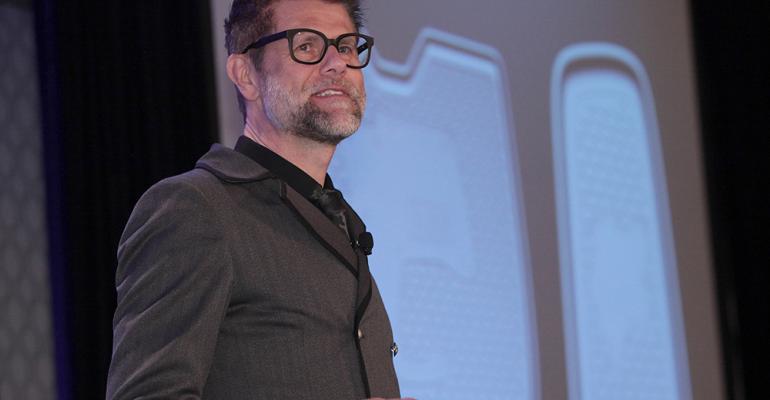 This year, Chrysler took home a Ward&rsquo;s 10 Best Interiors prize for its new Chrysler 200 and Jeep Cherokee, but its award-winning ways began in 2009, when an all-new interior-design philosophy kicked in full force with the &rsquo;09 Ram pickup.

DEARBORN, MI – Klaus Busse isn’t exactly recommending it, but he admits Chrysler’s plunge into bankruptcy helped galvanize the automaker’s design team and pave the way for some award-winning interiors ever since.

“(Bankruptcy) changes your perspective,” Chrysler’s head of interior design says, noting that during his days at Mercedes, executives were told to envision where they wanted to be in five years, while at the Chrysler of 2009, the future appeared less clear. “For us, it was ‛Where will we be in 10 days?’

“Those who did hang back, we became a ‛band of brothers,’” Busse says in the afternoon keynote speech at the 2014 WardsAuto Interiors Conference here. “Now we have each other’s back.”

The transition began with the 2009 200C concept car Chrysler developed that featured a cockpit that wrapped around the occupants rather than an interior that appeared to be sharply chiseled from granite.

“We had to make the point that we can do sculptures, not just boxes,” he says. “At the time, we were making gray boxes.”

From there the focus moved toward attention to detail, as Chrysler fiddled with vents, knobs and switches on its Town & Country minivan to make them look more “like a human hand actually had touched them instead of a machine.”

The automaker then created design “playbooks” to better define brand targets, he says, and finally zeroed in on sense-appeal – in particular designing for touch. Busse points to the center-console latch, used on every vehicle since the current-generation Grand Cherokee was launched, that is modeled after a weathered stone he found on the shores of Western Michigan.

“You may not realize it is like this stone, but you will know that it feels good,” he says.

Finally, Chrysler began to “put some soul in it,” Busse says, citing Chrysler’s “Imported From Detroit” ad campaign that kicked off with the 2011 Super Bowl telecast and the “Easter eggs” – etchings of the Detroit skyline, race tracks and other figures or classic-vehicle icons that pop up on infotainment screens – the automaker now routinely plants in unexpected places inside its vehicles.

“First it was getting the materials right and fixing the fit and finish,” he says of Chrysler’s interior-design recovery path. “But now we’re having much more fun.”

Asked how the vehicle-design process has changed over the years, Busse says interior designers are now the industry’s rock stars.

“There’s now a community of (interior designers) that have come together,” he adds, pointing to the WardsAuto Interiors conference as proof. “The exterior guys (don’t have this). So we feel special.

“We will move (automotive design) with interiors.”

Holistic Approach, Better Performance Needed From HMIs of Future
May 21, 2014