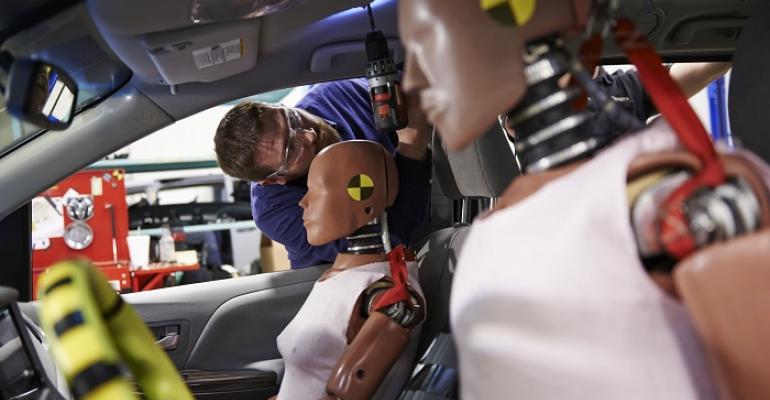 Roughly 700 tests have been conducted at the automaker&rsquo;s sole crash-test facility outside Japan since its August 2008 opening.

YORK TOWNSHIP, MI – Toyota’s facility here at its technical center south of Ann Arbor opened six years ago, but the automaker unlocked the lab’s doors to the media for the first time last week for a production-model crash test.

This facility, with more than 700 tests under its belt since August 2008, is one of only three Toyota crash-test labs in the world and the only one not in Japan, says Scott Miller, general manager-vehicle safety.

Nearly every U.S. test mode specified by both NHTSA and the Insurance Institute for Highway Safety can be replicated in the building here, Miller says, except those used in rollover testing. The 180,000-sq. ft. (16,723-sq.-m) space would need to be two or three times as big to accommodate rollovers.

Even tests that aren’t necessary for the U.S. market but are needed to satisfy rules for overseas vehicles, such as various car-pedestrian tests mandated by the European Union, can be done in York Township, Miller notes.

However, most of the controlled crashes performed in North America are for vehicles where Toyota North America leads development, such as the just-released ’15 Camry, whose chief engineer, Monte Kaehr, is based here.

The facility also handles last-phase testing for vehicles developed elsewhere that will go on sale soon in the U.S.

Some 1,120 100W bulbs illuminate the floor here prior to a test of the upcoming mid-cycle-refreshed Corolla compact car. The bright lighting is necessary for proper filming of the test.

“It’s always the exact same temperature in these rooms,” Miller says, no matter what vehicle is being tested or in what Toyota facility the testing is taking place.

The dummies, while sensitive to temperature and humidity, actually are quite robust and can be used over and over again. After each crash, the test dummies are reassembled for the next collision, and once a year their sensors are recalibrated.

However, Toyota soon will be retiring some of them, says spokesman Brian Watkins, as specialized dummies for front- and side-impact crashes now are available.

Miller acknowledges Toyota sometimes has to scramble to incorporate seemingly never-ending new test modes. He says incorporating the IIHS’s difficult frontal-offset test, which mimics a collision with a narrow, fixed barrier, such as a pole, came about “very quickly,” but the automaker nevertheless was able to accommodate the mode at the facility here within two months.

“IIHS can tell us tomorrow (a new test mode is coming),” Miller says of the short notice the group sometimes gives compared with the lengthier notice of new crash-test modes from NHTSA.

The test conducted here on a production Corolla was a NHTSA NCAP side-impact test at 35 mph (56 km/h). The car was set at a 30-degree angle, with the wheels crabbed so a 1.5-ton sled would hit it perpendicularly.

The dummies used in the test represent a man in the 50th percentile in size and a female in the fifth percentile.

Miller says the test witnessed by media used $1 million worth of equipment and took 12 man days total to prepare for, including seven days to build up the Corolla to be crashed.

Once a given test is completed, the data and video collected is downloaded quickly so engineers in Japan can study the results.

“We have done tests at midnight,” Miller says of being open for business for Japan while much of Michigan’s workforce likely is asleep.

Ten years ago, Miller estimates, Toyota would collect 500,000 data points from a single crash test. Now that number is up to 5 million, although he notes for the Corolla test just two-tenths of the data is needed.

The test of the refreshed Corolla was a confirmation test, done to physically confirm what the automaker thought it knew about how the car would perform based on computer modeling.

Still, it’s not unusual for the No.1 Japanese automaker to perform 30-50 crash tests of a mid-cycle changed model like the Corolla, and 75-100 tests on a vehicle undergoing a full model change.

Miller won’t disclose how much the facility here cost Toyota, but bluntly states: “It’s a lot of money.”

Many employees are recruited from nearby Washtenaw Community College, with a certain portion of the technicians here selected for specialized training in Japan.